On Monday, crews installed an 18-foot-tall, 9,200-pound bronze sculpture outside Milwaukee City Hall. The piece, titled Mixed Feelings, is the work of British sculptor Tony Cragg, and was previously on display in front of the downtown federal courthouse last summer as part of the inaugural Sculpture Milwaukee. An anonymous donor of the Greater Milwaukee Foundation provided a grant to Milwaukee Downtown BID #21 to acquire Mixed Feelings. Last month, the Milwaukee Common Council voted unanimously in favor of accepting the gift.

In a press release, Mixed Feelings is described thusly:

Mixed Feelings, 2010, is an immense glowing monument, formed by two intertwining bronze towers, pushing together and pulling apart as they spiral towards the sky. As the viewer circles the piece, human profiles come into and out of focus. Each tower of feeling exerts a gravitational pull on the other, creating a unique, pulsating form of energy. Cragg breaks down the barrier between abstraction and figuration, creating art that mirrors the fullness of the world in which we live. 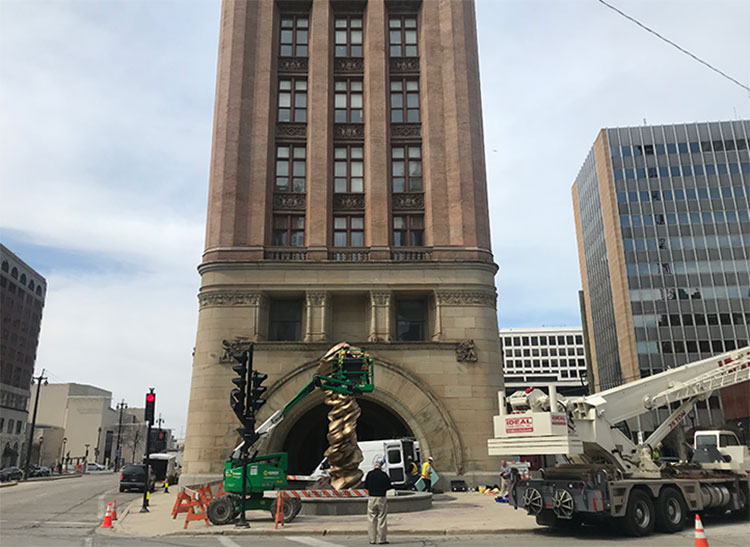 And hey! We shot a time-lapse video of yesterday’s installation, condensing five hours of work into less than a minute. (Thanks to the fine folks at Pabst Theater for letting us sneak up to their outdoor balcony for the bird’s eye view!) The second round of Sculpture Milwaukee, meanwhile, will be on view downtown from June to October 21, 2018. Installation is set to begin May 10.

Oh, the song is called “They’re Always Building Something.” It’s by an old band.