Richard Sala‘s influence is everywhere, in my opinion more so than any alternative cartoonist of his generation. There seems to be an entire new wave of artists touched by his style. Browse new graphic novel releases or webcomics and you’ll find a treasure-trove of angular jaws and delicate, elongated hands, sideway looks and dramatic tiptoeing, beauties and beasts with deceivingly childlike traits. Case in point: the amazing Lisa Brown, whose sweet and dark graphic novel The Phantom Twin was featured in Lion’s Tooth subscription. When asked about Sala’s influence, on Twitter, her response was: “I am honored to be mentioned in the same breath [as the] great Mr. Sala. And yes, I have pored over his brilliant work for years and years. He is missed.”

Richard Sala passed away of a sudden heart attack exactly one year ago today, at the age of 65, an untimely, tragic death that left a huge hole in the world of comics. 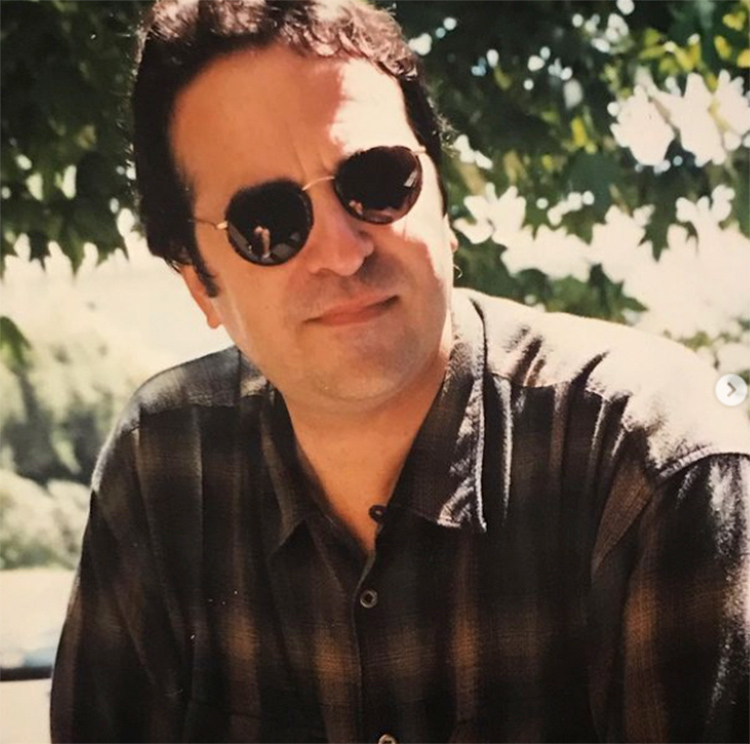 Is there anything you’ve been procrastinating about, especially since the beginning of the pandemic? That specific task you can’t seem to touch, that one thing you’ve convinced yourself you will get done for sure as soon as life goes back to normal? Well, this right here is that snag, for me, and way before COVID, if I’m completely honest.

A bit of context: In Fall 2019 I started publishing here and in Lion’s Tooth website a few interviews with American cartoonists I first met while visiting the US from my native country of Brazil in 1997. Since the reunions started in 2017, the series is called “20 Years Later.” So far I’ve talked to eight of the 23 people in the original list, but posted only half of those conversations. It is a very personal project and a surprisingly, excruciatingly, slow process.

In late February of last year I was in California hoping to interview a few more cartoonists, including Richard Sala, who I had tracked down on Facebook. He seemed pleased to hear from me. “I look back on our long ago meeting with fondness,” he wrote, but explained he didn’t want to meet in person. “It’s very kind of you to wish to interview me. I only do them by email these days. I find that when I do audio interviews (my friends tell me) I sound overly negative and it’s probably true […] Dan [Clowes] will tell you that my negativity in my talk is my ‘default’ personality (it always has been) and we just laugh it off—but it can be painful to read it in print if it sounds like I’m complaining. I actually feel very, very lucky to have done this [comics] as much as I have…” 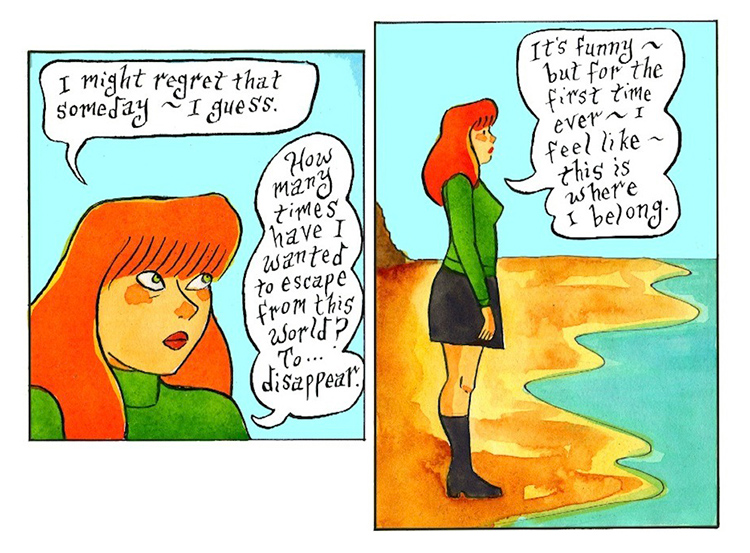 Of course, we, the readers, are the lucky ones. I mentioned in the beginning how much of a reference Richard Sala is for younger cartoonists. Meanwhile, his work is almost always described in terms of his own influences. The obituary in the Comics Journal has an 18-line “partial list” of them, ranging from Fritz Lang’s Doctor Mabuse, to Japanese artist Utamaru, to Fantômas, to J.D. Salinger. This isn’t to say that Sala’s art is derivative. On the contrary, it is extremely original and inventive, even as it dives deep into the collective unconscious of pop culture iconography—which is probably what makes it so stimulating to other creators. This never-ending cycle of inspiring and being inspired is something he would enjoy, according to his close friend, cartoonist Daniel Clowes: “[Richard] hoped that one day, some lone weird kid would find one of his books in a used bookstore and find the same kind of connection with his work that he’d had with his own bookstore heroes.” 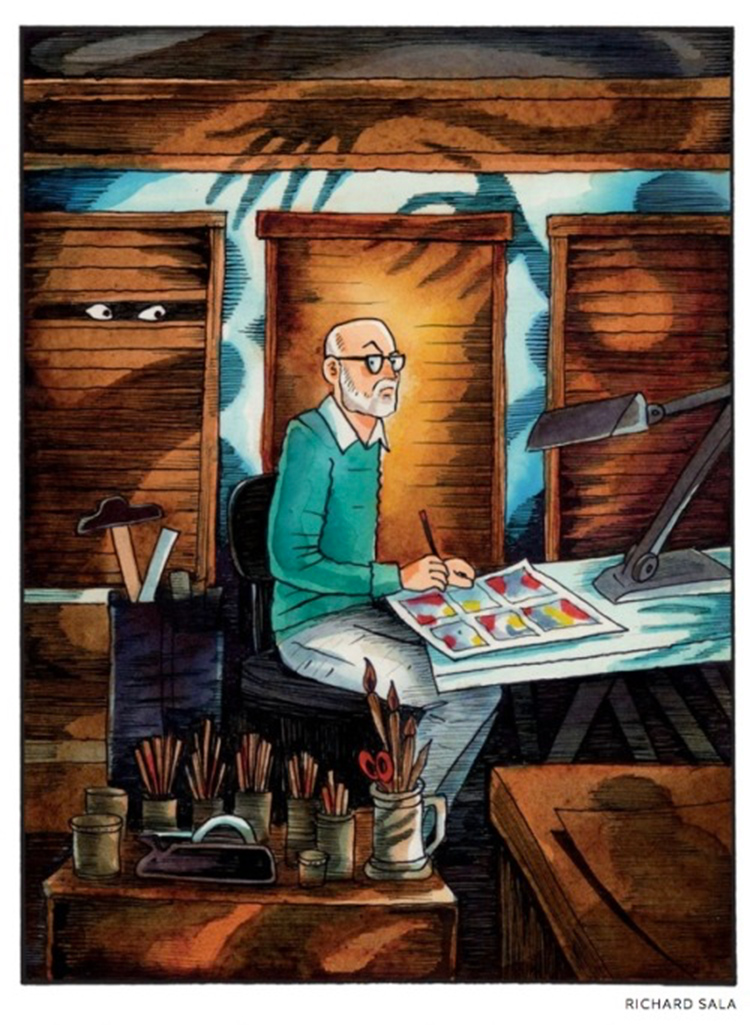 My 2020 trip to California was kind of a bust when it came to interviewing cartoonists. I had a list of seven people to approach, but I was only able to meet two (Kaz and Jaime Hernandez, wonderfully enough). On the airplane back home I saw a person wearing a mask in public for the first time. A couple of weeks later the NBA was cancelled and I was at a suburban Walmart hunting for toilet paper with bow and arrow.

I met Richard Sala on a sunny summer day in 1997 in Berkeley, California, at his home with his wife at the time—the same house where he would spend the rest of his life. He welcomed me and photographer/BFF Carolina Pfister warmly, chatted for hours, showed us what he was working on, and even demonstrated how he drew with a nib. I was in awe of how precisely his archetypal characters took shape on the blank piece of paper. Sala was a legend for me thanks to his Kitchen Sink Press books, Raw and Blab anthologies, and the amazing “Invisible Hands” animation for MTV’s Liquid Television. I was nervous at first but it was an easy, spontaneous deal, and one of the happiest afternoons I can remember. 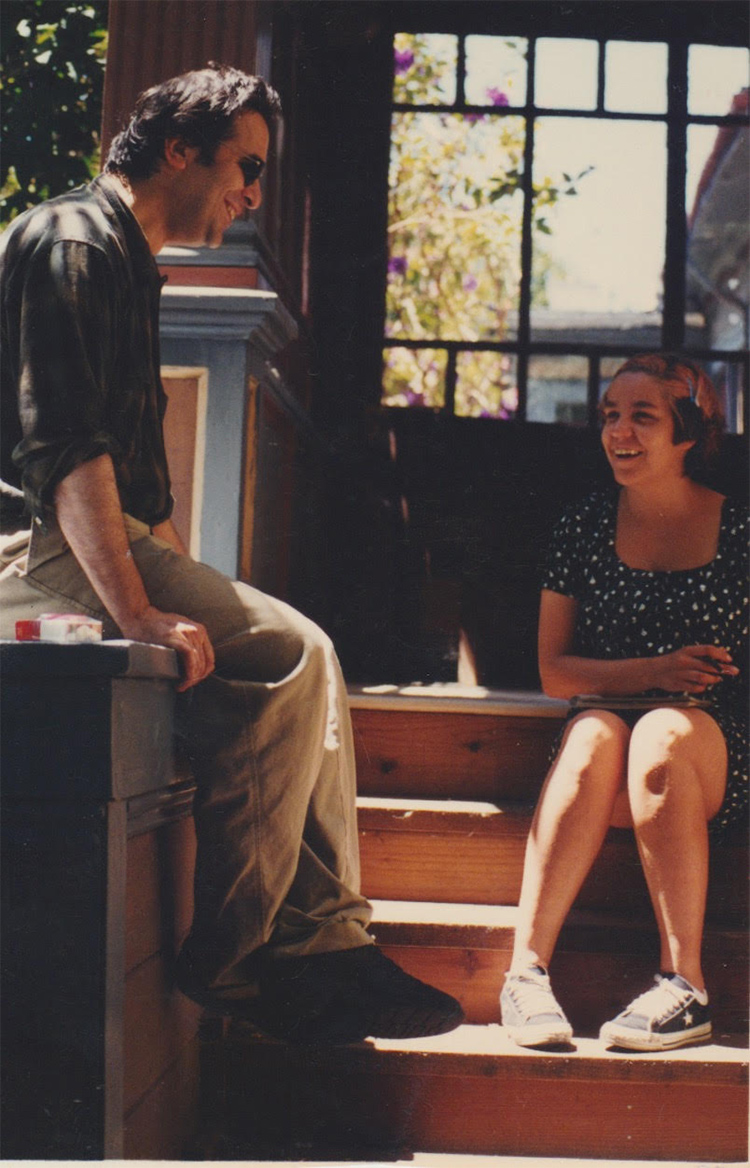 Likewise, when I started reuniting with my comics heroes, things were overwhelmingly positive. The last 20-plus years had been good to most of them, with many achieving great recognition and financial stability that didn’t seem likely when we first met. There was a sense of triumph. My two favorite publishers had released well-deserved victory lap books. Drawn & Quarterly: Twenty-Five Years Of Contemporary Cartooning, Comics, And Graphic Novels is a 776-page-long illustrated celebration of the Canadian company, while Fantagraphics’ oral history is literally called We Told You So, referring to their advocacy of “Comics as Art.” With the heartbreaking exception of Fanta’s co-publisher Kim Thompson, who passed away in 2013, everyone I talked to in the ’90s seemed to be doing well, including in their personal lives. 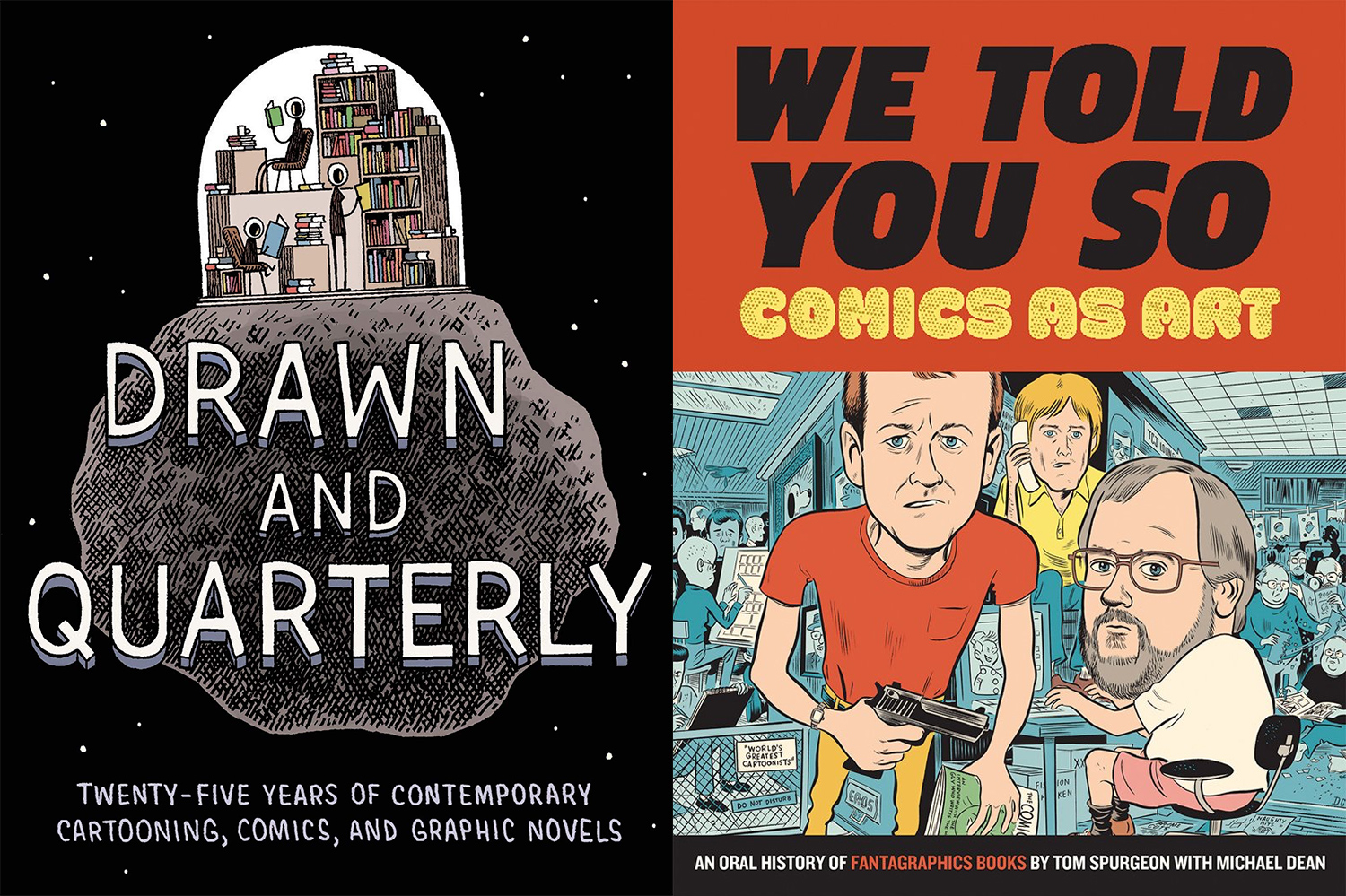 But in any large enough sample of humans there are illnesses and insecurities that often become worse with age. A couple of people I adore and whose work changed my life declined to be interviewed for saddening personal reasons. Others were hard to reach, which was much less of a bummer but didn’t help the cause. And finally, Richard Sala’s premature death at the height of his artistic genius was the nail in the coffin of the victorious, optimistic feeling that surrounded this project at first.

Like many of us right now, I’m trying hard to shake off the funk. In 2022 it will be 25 years since the encounters that inspired this series, and—fear not—I sincerely hope the next article will be edited and posted before then.

Looking through old drafts, I found my list of questions for Richard Sala. We will never know his responses to them, but I can try to “answer” a couple.

Cris: Let’s talk about the new book, Poison Flowers And Pandemonium. What can we expect? Is it all new material or was some of it published before in collections or online?

Answer: The book collects four novellas and most of the material appeared originally as webcomics on Tumblr. We can expect 308 full-color pages of the very best Richard Sala art, storytelling and imagination. That creepy meanie, the Bloody Cardinal, is back! There are monsters and femme fatales. Violence and boobs (but no vags). It’s already Lion’s Tooth favorite graphic novel of 2021 and featured in our May subscription packages. The bar is extremely high for the rest of this year’s releases. Get it now from us and not from Beelzebezos. 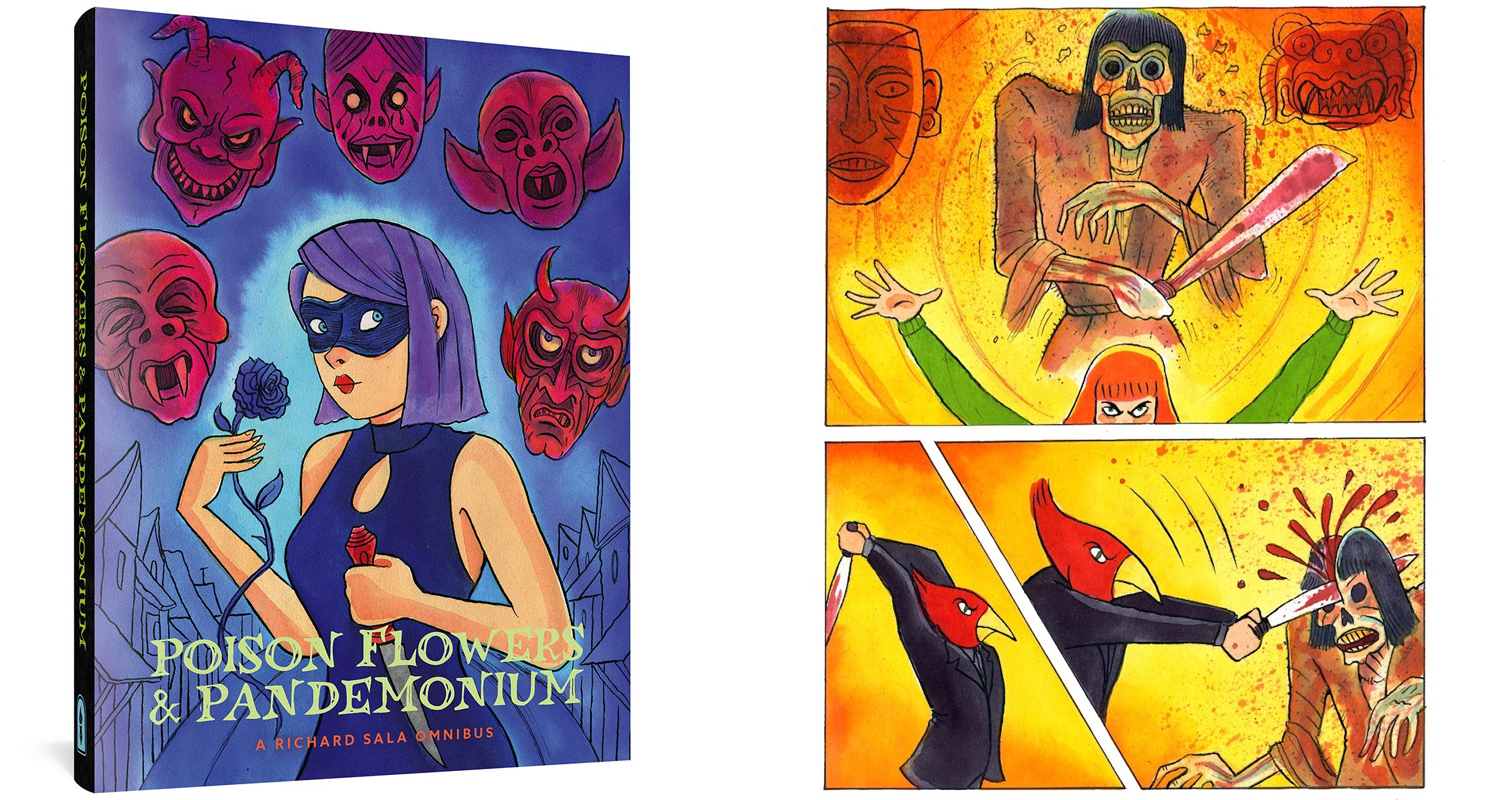 Cris: I know you’re a favorite of fellow cartoonists in your own generation. Do you feel this adoration has been extended to younger artists? It seems to me that in recent years different audiences have discovered your work, like horror fans, for instance. Wonder if you noticed this at all.

Answer: Here are some posts found online around the time of Richard Sala’s death. Not all of them are from younger people or horror fans, but hopefully they make my point. The question was an ill-disguised compliment anyway—what on earth did I expect him to say/write back? 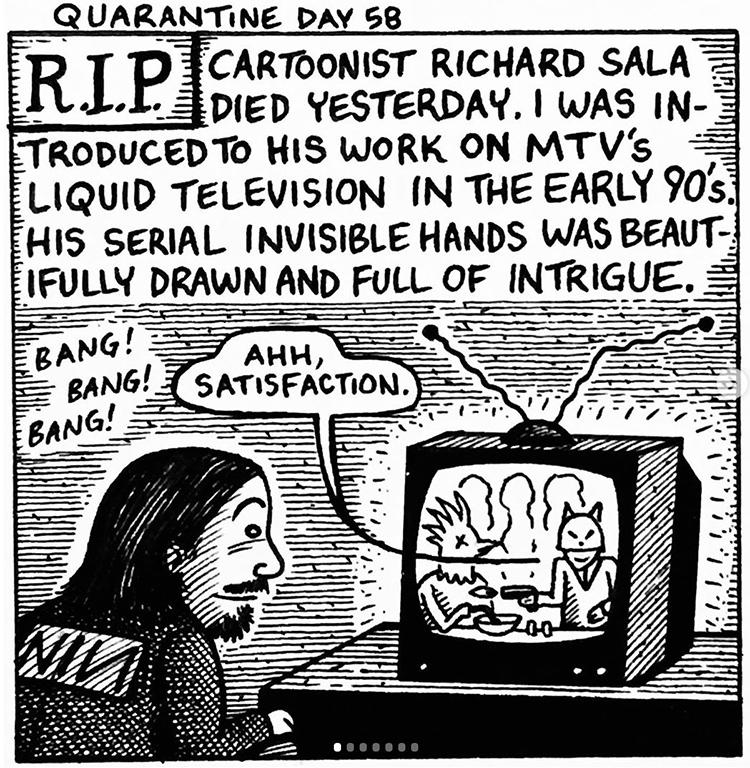 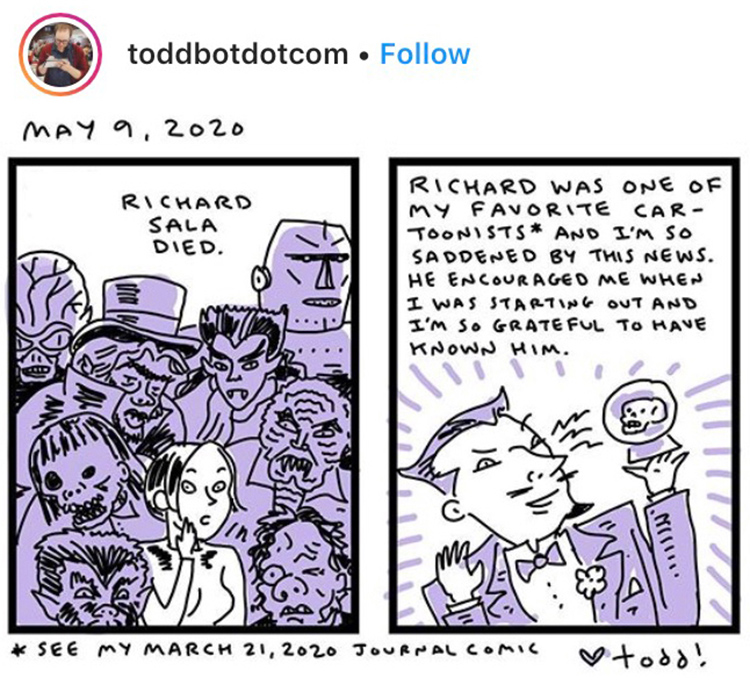 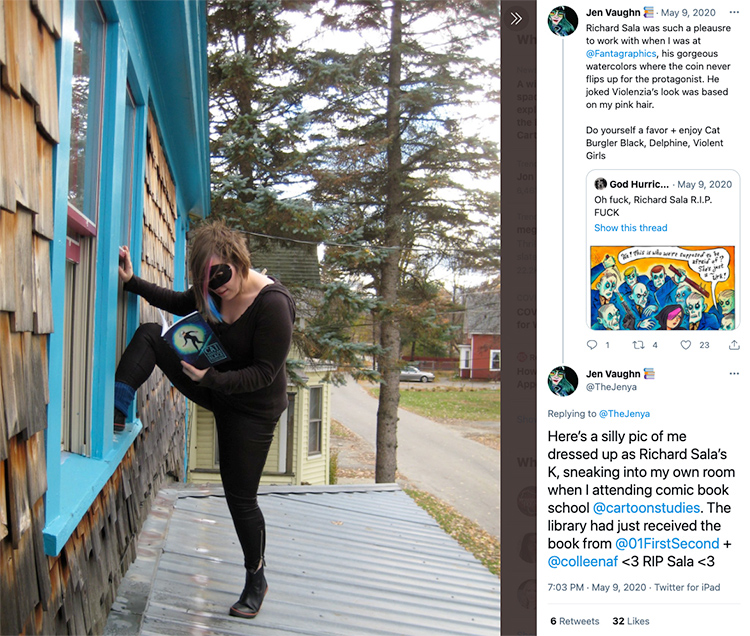 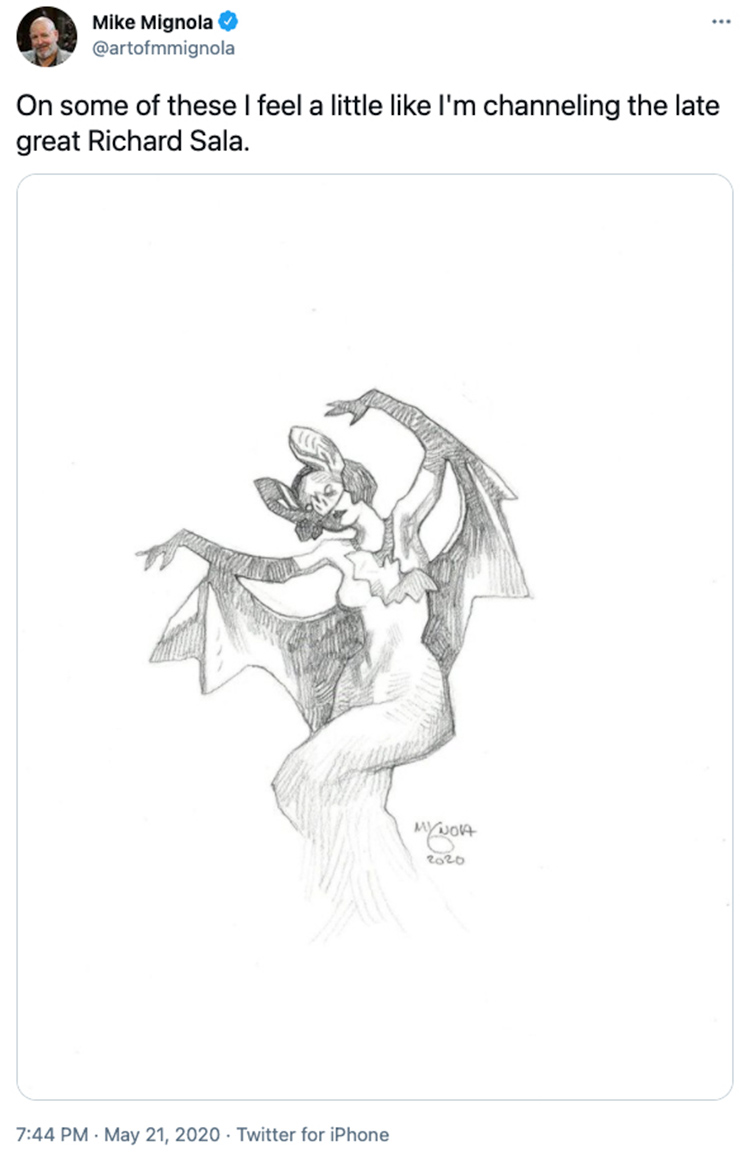 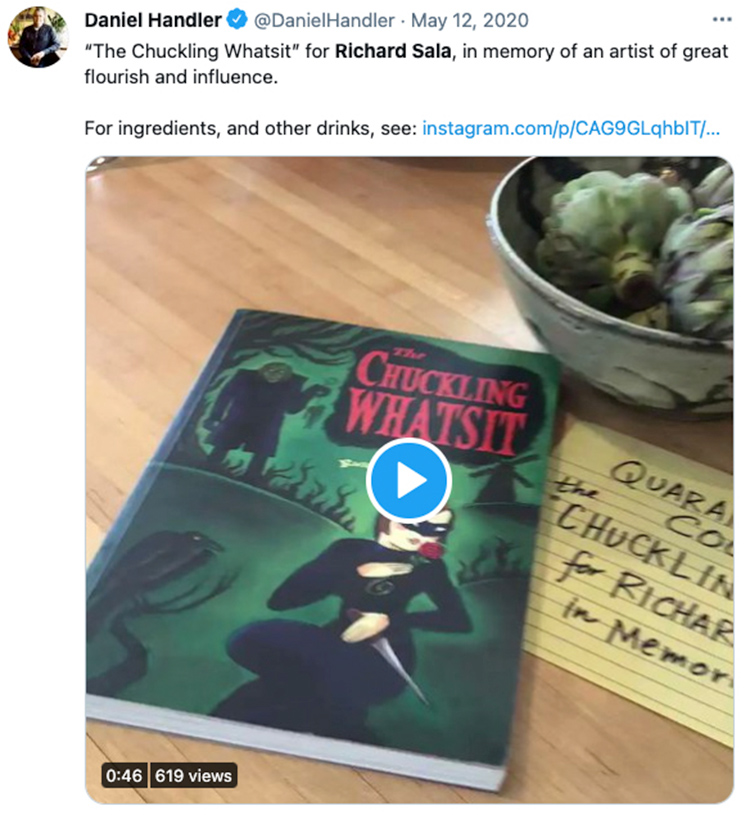 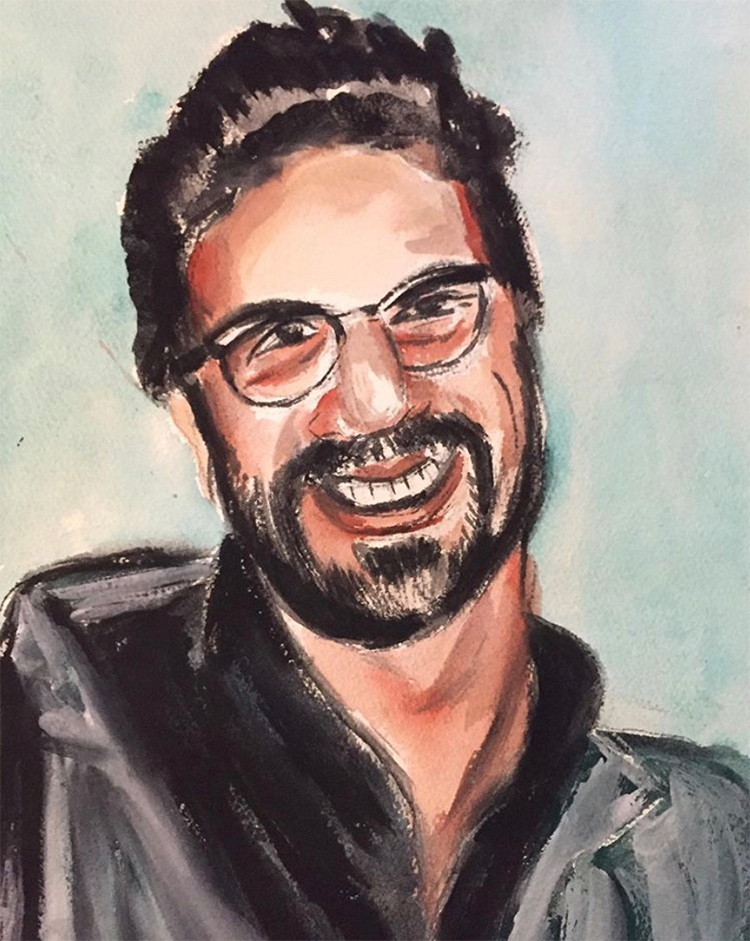 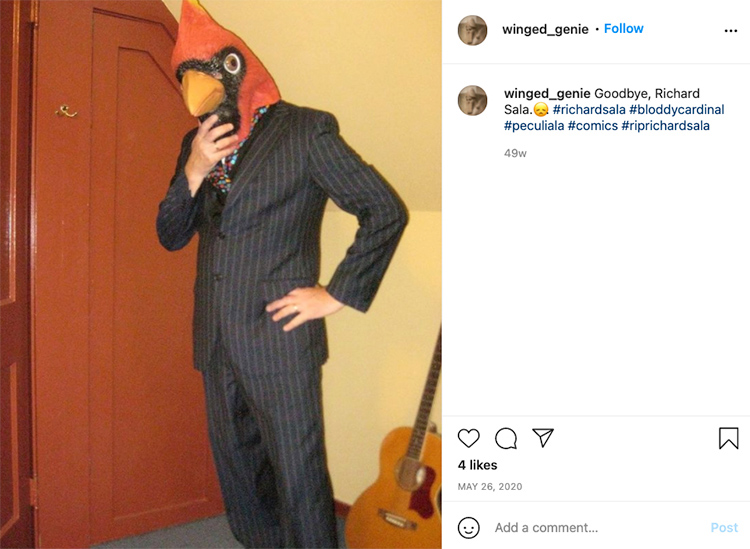 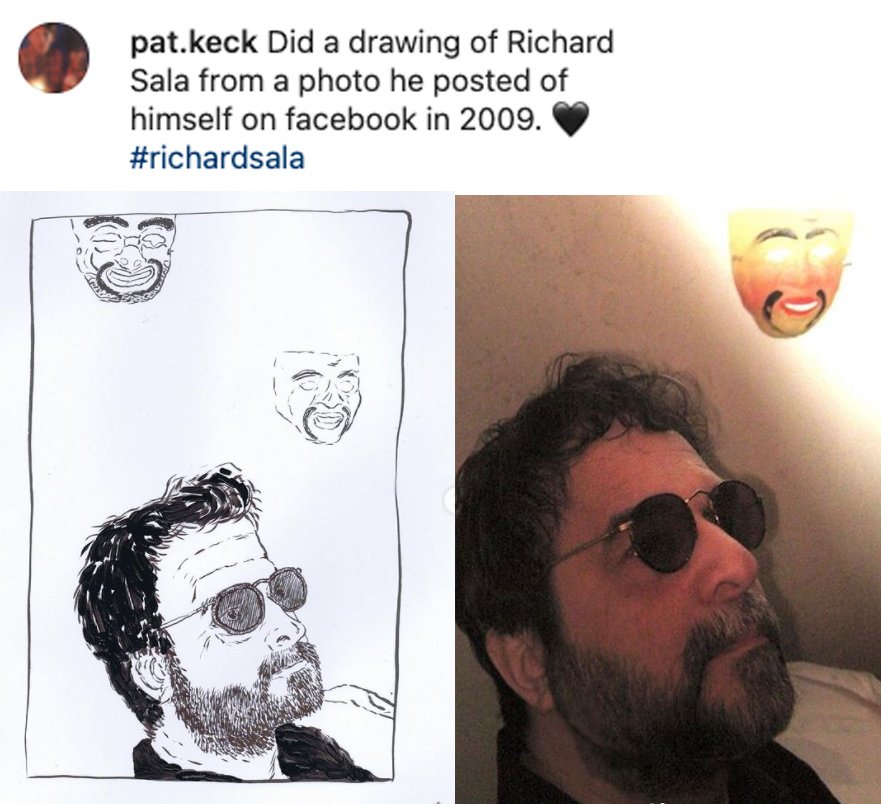 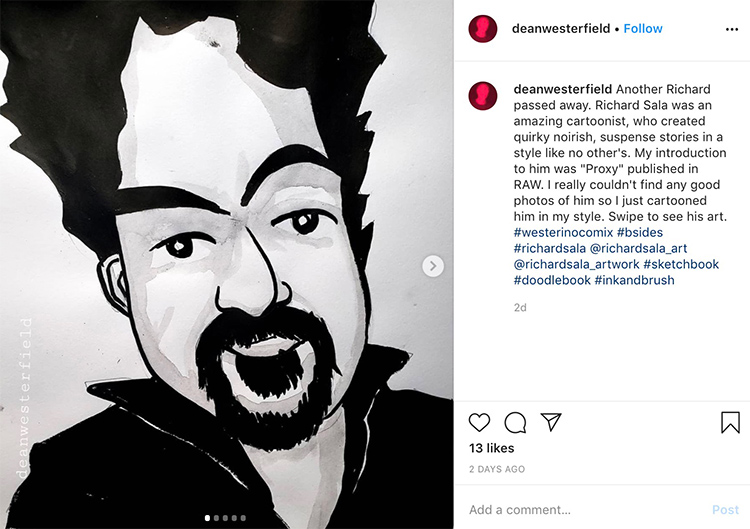 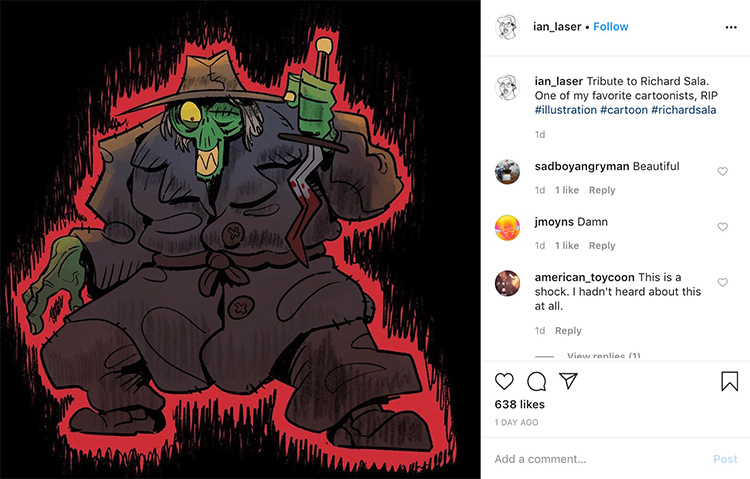 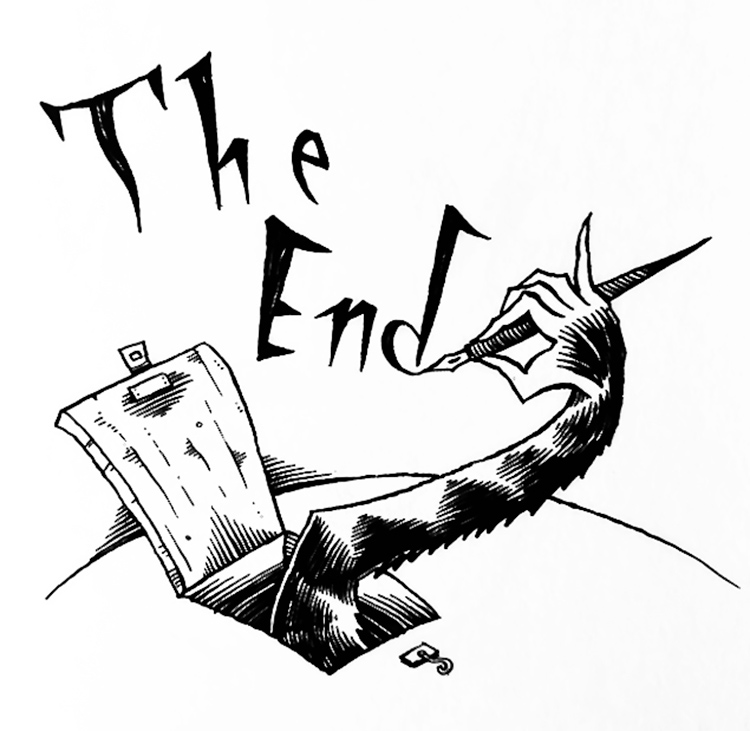