Aside from serving up some of the finest and most innovative sausages in Milwaukee (or anywhere, for that matter), The Vanguard is probably best-known for the unique things they show on the restaurant’s two TVs. Each and every day, diners are treated to hilarious and captivating visuals like quirky infomercials, old wrestling matches and strongman tournaments, vintage game shows, reruns of Soul Train, and other classic programming that customers would be hard-pressed to see anywhere else in 2019.

Adding to the Bay View business commitment to visual excellence is “Rappy Hour,” a weekly event that combines old school hip-hop and hard-to-find music videos to forge an immersive and nostalgic experience that’s not happening anywhere else in the city. This innovative musical mix is put into action by Luis Salazar, a veteran Milwaukee DJ who spins under the moniker DJ1L.

“Basically, Rappy Hour started because I had the name first, then we worked backwards,” Vanguard co-owner Chris Schulist says. “He was DJing rap shit for a while and then one night. he played a video and I was like, ‘You should do that all the time.'”

Salazar, an avid record collector and music video appreciator, essentially manipulates album recordings and old videos before combining them into one file and then scratching on top of it live. As complex as it sounds (and probably is), the toughest part is acquiring the music videos. He says he finds these rare and forgotten treasures online, in the form of old promotional VHS tapes and DVDs from bygone record chains like Sam Goody. Occasionally, he’ll strike up deals with collectors across the world, and Schulist is more than willing to offer some records from his Dope Folks hip-hop label to help bolster Salazar’s collection.

According to the DJ, Rappy Hour focuses on material released before the turn of the year 2000.

“I just want to keep on finding old videos that I grew up watching and being able to blend them and re-live my childhood,” Salazar says. “My favorite part is showing people old videos of rappers they know now, like when you see Jay-Z rapping in the early ’90s. He did a couple early songs with Big Daddy Kane and Notorious B.I.G.”

When done right, the pairing can be so seamless that people aren’t even aware of the involved process that went into making the media merger possible.

“I think the great thing is people don’t realize it’s happening. I don’t think they’re realizing that he’s doing it,” Schulist says. “People are like, ‘Do you know that it’s syncing up?'”

Having both grown up during the heyday of shows like Yo! MTV Raps, Salazar and Schulist are happy to have an outlet to share their mutual love of old school hip-hop and forgotten videos with people every Thursday night.

“I just wanted a happy hour for rap. To me, if I could go to a bar and they’re going to show old school rap videos of all the songs I love, and I could sit there and watch them along with hearing them, then I’m down.”

Rappy Hour takes place at The Vanguard every Thursday night from 10 p.m. to close. You can watch some of DJ1L’s music video mixes here. 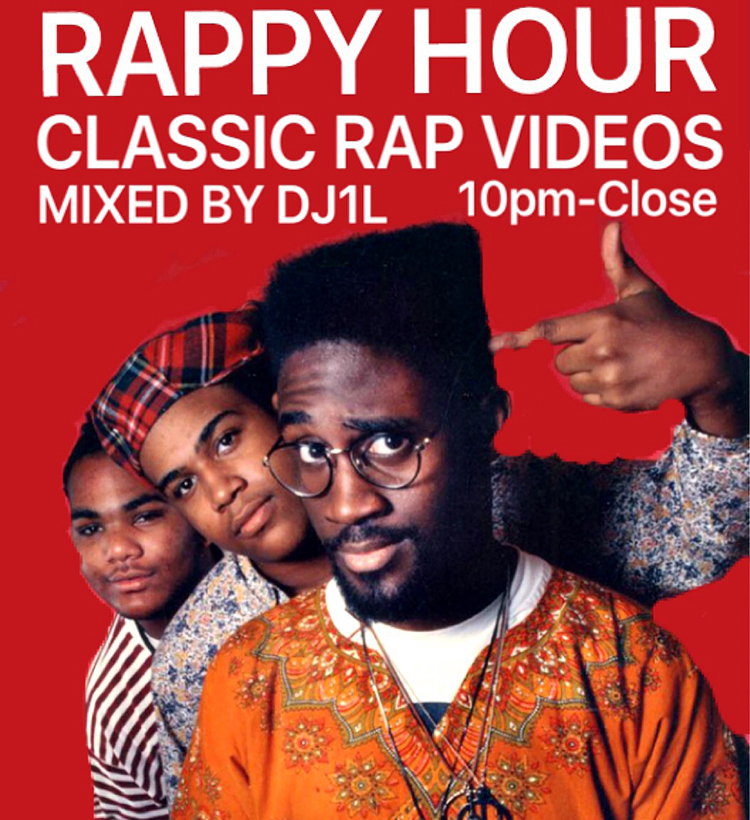