Playing an album front-to-back on that record’s round-numeral anniversary year isn’t exactly a new concept. In a music landscape cluttered with more bands than ever vying for your limited live music dollar, the novelty of seeing a band you used to like a lot playing a record that once meant something to you occasionally outweighs the benefit of seeing a modern act you enjoy playing cuts from its latest effort. After all, you’ll probably get those songs on the anniversary tour nine years from now, right?

All that said, Wednesday night’s Misery Signals show in the basement of The Rave—as part of the metalcore mainstay’s eight-show, original lineup reunion tour—didn’t display any of the sad edging of desperation of a poorly-veiled stroke-job cash-grab that most album anniversary shows tend to be. Rather, a hoard of passionate fans drove from states away to see Misery Signals do justice to the influential Of Malice And The Magnum Heart in the city it was written (and just one of three U.S. stops on the jaunt). One hour, 11 songs, and hundreds of ringing ears later, a 10-year-old album that means the world to a small pocket of people, got its belated due.

After a flurry of openers we missed (instead, waiting it out at nearby bar, where we met two guys from Kentucky who drove up “because it was the closest stop”), a Malice-themed tapestry was subtly unfurled and Misery Signals quickly took the stage and send the basement into a frenzy with opener “A Victim, A Target” and quickly chased it chronologically with “In Response To Stars.” By the time the song ended, long-departed original vocalist Jesse Zaraska’s heathered gray t-shirt was sweat-soaked and markedly darker throughout than it was five minutes prior. “Thank you, thank you, Milwaukee,” the Saskatchewan-based singer said. “You’ve always been a second home to me.”

Keeping with the album order, Zaraska introduced “the most important song [they] ever wrote” (“The Year Summer Ended In June”), which was a blistering and brutal song that saw sweat-drenched bodies building at a stage side barrier World War Z-style in hopes of getting a chance to contribute on the mic Zaraska occasionally extended to them. Even with the eager crowd assistance, the exceedingly raspy vocalist admitted after the song, “I feel 500 years  old.”

Zaraska, who left the band in 2006—with the band’s debut being his only contribution to the Misery Signals discography—was savoring the moment, as he was gracious in banter between each almost-flawlessly-executed standard. “Thanks for making this old guy feel cool again,” he said, panting, after “In Summary Of What I Am.” Departed guitarist Stuart Ross, though less vocal, seemed to be enjoying himself as well, and repaid the favor by expertly navigating the album’s complex time signatures. 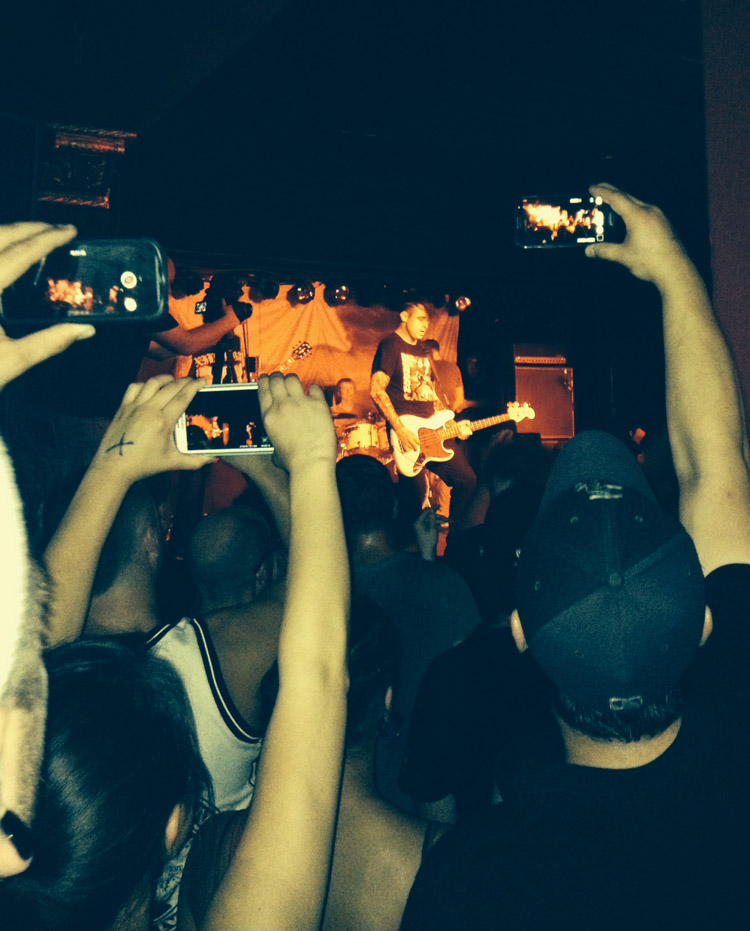 Everybody seemed to have a favorite, as those in the crowded and humid basement seemed to almost trade off arm-flailing and ninja-kicking duties on a song-by-song basis. Still, instrumental “Worlds & Dreams” seemed to halt the chaotic crowd, as moist metalcore kids collected themselves and hoisted their phones upward to capture a photographic or video evidence (in a rare situation where this was acceptable) of the spectacle happening before them. The sole instance of Signals getting crossed found the ninth and tenth tracks being swapped, making the devastatingly harsh “Five Years” the night’s closer. Seeing the end was nigh, the crowd’s intensity climbed to new levels as Zaraska was swallowed up by screaming fans. As the band departed, chants of “one more song!” permeated through the (tellingly) still darkened room. The band obliged, and brought two members of sister band 7 Angels 7 Plagues (which had three members of Misery Signals on its roster through the years) to bring the memorable night of Malice to a close, with a 7 Angels cover.

Of course, the “one more song”s persisted after the fact, but it was a bold and brilliantly-drawn period on a truly special night in Milwaukee music. Who knows, maybe it will happen again. How does five years from now look for you, Misery Signals?