In their brief two year existence, Doubletruck have foregone the traditional process laid out for young bands. Side stepping the demo tape stage, they burst out of the gate in 2015 with a self-titled, 14-song full-length cassette filled with doom-y riffs, precise rhythms, and rabid vocals. Following their debut, the band released the acoustic album Unleaded in September. To keep their 2017 in high gear, the band is poised to release their vinyl debut, Honkhonktopia, this week.

With Honkhonktopia, Doubletruck have expanded their sonic palette. While not making any hard turns in a particular direction, the band has bulked up their sound with a smattering of psychedelia and boogie rock. From Zeb Hall’s ranting and rambling verbal gymnastics to Miles Harbury and Zach Lewis’ doom-y/dance-y riff juxtaposition—not to mention Doug Mellon’s deliberate backbone—there’s a density to Doubletruck’s sound. Dense, but not impenetrable. The songs open further with each listen, a truly rewarding experience for the listener.

Milwaukee Record recently sat down with Doubletruck in advance of their album release show (Friday, December 1 at High Dive, with Marielle Allschwang, Lucky Bone, and Suffer Head) to discuss their band trajectory as well as their fascination with the trashy side of today’s society.

Milwaukee Record: You put out your first full-length album on cassette and now Honkhonktopia is your second. It seems like your song writing pace is a lot quicker than most.

Zach Lewis: We try to practice twice a week and that’s hard. We all want to practice more.

Miles Harbury: Who likes playing the same songs over and over?

ZL: We have a third album written, so it’s going to be a hard time playing these songs for these shows.

MR: You just put out an acoustic EP. How did that idea come about?

ZL: We wanted to sell out right away. I like the first few Foo Fighters albums and then they did that acoustic album. I feel like you could just speed up the process.

MH: You put out the acoustic album, you get huge, people love you.

ZL: Playing all the same songs forever, you get to play them differently for fun in between learning new songs.

Doug Mellon: We really did that EP because it was something to do while [Miles] was traveling.

MR: How was the writing and recording of Honkhonktopia different from your debut?

MH: The writing was very different—maybe just more involved. We were more comfortable with being together.

MR: “Regular Ass Bobcat” sounds like each person is actively trying to derail the song, but it never quite gets the train off the tracks.

ZL: That’s why I love and hate that song.

ZH: Songs like that are hardest for me—rambling at a really weird cadence to match up with a riff. I guess “Bobandy” would be the earliest example of that. That’s also kind of creepy-crawly-blues-y, but really out there.

I feel like most of the time the lyrics don’t correspond with the song titles. In a couple of cases it does. Like “Butt Mountain,” that’s just a phrase we’ve had floating around that we’ve wanted to use. It was gonna be the band name and then it was proposed as the album name as well. Eventually we pushed it down to the name of the song.

MR: Some of the new songs have doom-y riffs that shift into a part with more of a dance vibe to it.

MH: I blame it on that one Halloween we were T. Rex.

ZH: That was the first time I danced at a show and I feel like I dance way more to newer songs. At old shows I would just crawl around and eat chicken. The end of “Bobcat” when it’s like [hums riff], it’s almost like swing.

DM: The first album’s more stoner rock-y, I guess. We were still trying to figure stuff out, so it was riffs that we made jams into long drone-y songs.

MH: We were just trying to build a foundation.

MR: Did you have a theme or idea of what you wanted this record to be?

ZL: It turned out to be pretty bleak. [Zeb] got pretty political. Honkhonktopia is kind of sarcastic. It’s like trash on the ground and mutated deer. I don’t know if we intended that, it kind of just all lined up.

ZH: I never set out to write a song about the government and how much they suck. You know, that’s never the intent. At the same time, the election was going on. Trump’s gross and it’s impossible not to talk about. You’re seeing it all the time. “Surf’s Up” and “American Werewolf” are definitely commenting on gross overindulgent people at the top of our society that are becoming more and more visible as the days go on.

MH: It seems like you play off of TV Land—celebrity life and stuff.

ZH: I’m obsessed with insane people. People who live their lives by ridiculous margins. To me, Trump was a gross fascinating figure before he became a political entity. It just seeps into all parts of our society. This is just accepted everywhere. It’s not just him, it’s millions of other people that have been hiding in the shadows. Talk about all the weird grossos we’ve learned about in the last two years. Between Steve Bannon, [Anthony] Scaramucci, Jeff Sessions, all these guys.

ZL: I like that [Zeb’s] route has been in the voice of them being dumb, instead of being preachy. But like Country Teasers, it could be misinterpreted.

ZH: Definitely still rolling with the Country Teasers thing. [Sings] “I’m a big fat hick.” It’s not subtle. I realized, as I write lyrics, sometimes I make myself uncomfortable. I feel like there’s a lot of commonality between these insane evil figures we see and day-to-day average people. Within the means you’re allowed, you indulge in these same devices to the same exorbitant ends. If you were a millionaire, you would also be a big fat gross weirdo who eats steak and never learned how to drive a car.

MH: Or talk to people properly.

ZH: Right, because you’d be a big fat gross millionaire living in a castle and you don’t have to learn anything. “Werewolf” is definitely about “Working For The Weekend” types who are just 9-to-5 normal guys, but on the weekend they cut loose and go out and do a bunch of fucking blow and have sex with a 15-year-old and then go back to their regular job. There are people who do shit like that and they’re not crazy evil CEOs—they’re regular day-to-day people. That’s the real anxiety to me, finding parallels between that shit.

That’s what’s been crazy, writing lyrics about this type of shit and seeing it in the news. Of course it’s all the guys who just “seem like a real funny guy who liked to make light of everything.” Well, probably because he was masking some crazy insecurities that manifest in some horrifying behavior. Sometimes the sweet and the sour go hand in hand, you know. 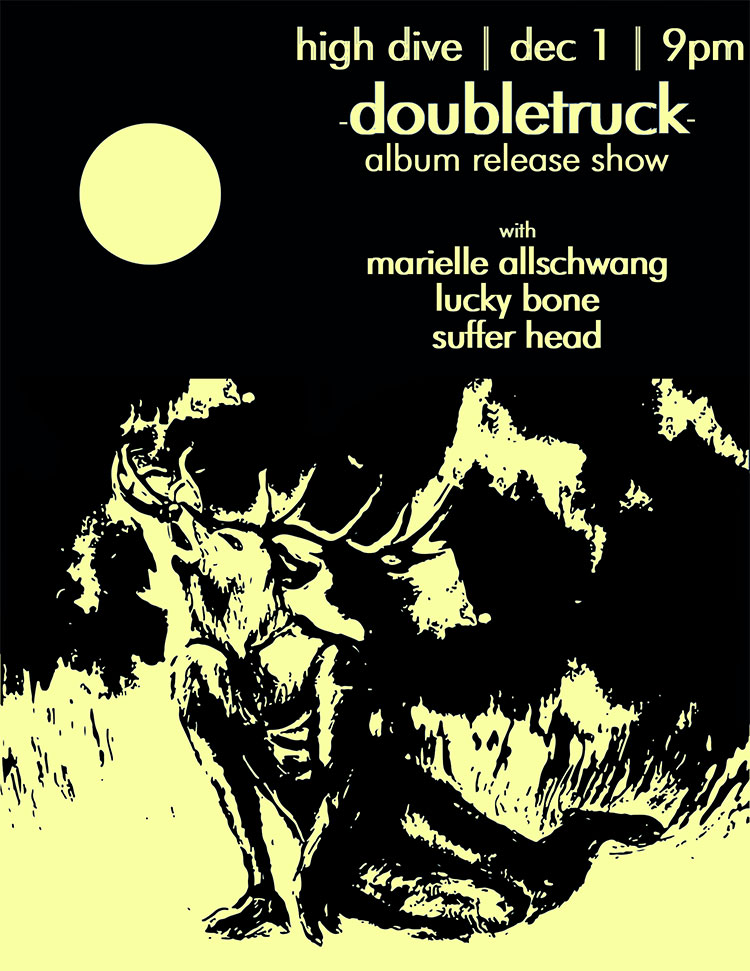