To be honest, I wasn’t really looking forward to Saturday night’s MxPx show at The Rave as the concert drew closer. It was one of the first truly cold, windy, snowy, and just plain brutal days of the fall…and that was just a hint of what’s sure to be worse weather to come. It was the one Saturday night for the next month or so where I didn’t have any other work events, family commitments, or holiday gatherings to attend. Speaking of holidays, the staggering $19 ticket/venue fees added to the listed price also wasn’t super appealing to me during a time of year I really need to start buying gifts.

Another reason I was on the fence about attending the concert was, well, I haven’t really listened to much MxPx in quite some time. Other than dipping into the Mike Herrera Podcast from time to time, the band and its members have been largely off my radar since 2000’s The Ever Passing Moment. However, as one of the first bands to help usher in my love of punk and/or pop-punk that has held strong into my late thirties, I felt that I owed it to MxPx to bundle up, pay up, and show up to see them. Plus, Caleb and I have been talking about going to this for months and I didn’t want to let him down.

Now that I’ve had a day or so to process the show, I can confidently say I’m glad I went. Instead of doing a traditional review (if the first person voice I’ve been employing and the personal info about my life didn’t already make that apparent), I decided to cut to the chase and just list some takeaways from Saturday’s MxPx concert in the basement of The Rave.

1. They still draw!
I’d guess there were somewhere between 750 and 900 people there.

2. People travel to see them
At one point, Herrera asked if anyone came to Wisconsin from another state for the show and it seemed like a fourth of the audience came from elsewhere. And here I am whining about a 20-minute drive on a cold night.

3. Kids love them
The audience ranged from lifelong punks and/or reformed Christian music fans in their fifties and sixties to grade schoolers who were brought to the “Punk Rawk Show” by their parents. “How many people brought their kids tonight?” Herrera asked at one point during their set. “We love it when kids come to our shows.” After the show, I saw someone laying on the ground near the exit. No, it wasn’t a drunk dude who passed out (though there was one of those too!)…it was a tuckered out kid who was sleeping on a pillow his parents brought. 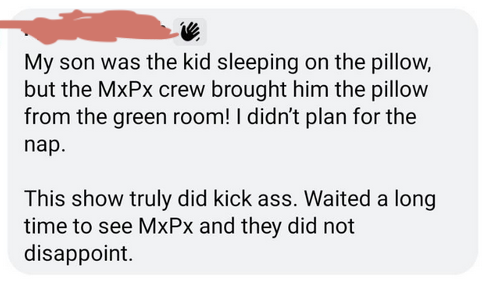 4. Sahan was there
Hey, Sahan!

5. The basement is my favorite place to see shows at The Rave
It’s the perfect size. It sounds good. There’s hardly ever a line at the bar. I figured it would be in the basement when this was announced, and was happy when that was the case. 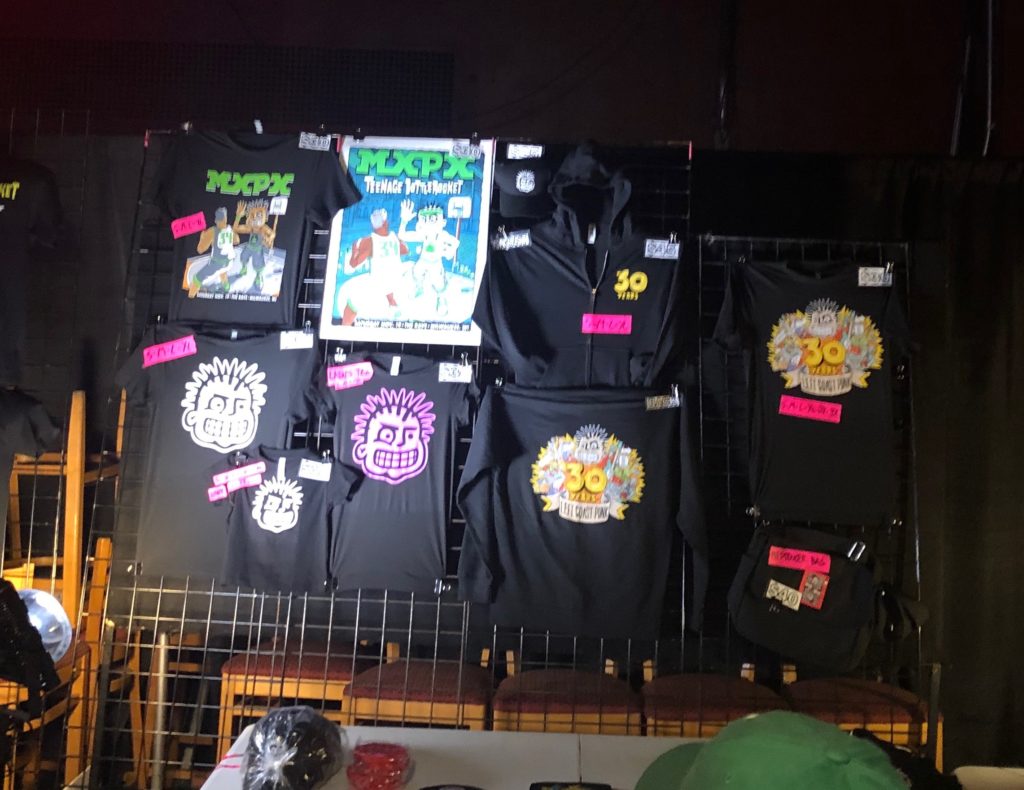 6. MxPx’s merch game is dialed in
The band has gotten close to 30 years of use out of that spiky-haired guy, and he’s still going strong on their merch. In addition to loads of apparel, pins, and other items with that guy on it, the band was selling city-specific screen printed posters for the November 19 show at The Rave, as well as shirts with the same Giannis-nodding design on it.

7. The band is extremely tight
Even though the only play one-off shows, big festivals, and short regional jaunts on a very sporadic basis these days, MxPx sounded legitimately great. Much of the set was played with album-like precision. Other songs had elements added to apply a new feel to the live renditions. Either way, the band was extremely tight, especially considering…

8. The performance was super high-energy
They were jumping around while playing a bunch of blistering and up-tempo stuff without having the sound suffer in the slightest. As a band that’s been at it for 30 years and as dudes who are looking down the barrel of 50, they looked great, played proficiently, and kept the energy up throughout.

9. MxPx has apparently played The Rave A LOT
At one point in the show, Mike and Tom noted this was their NINTH show at The Rave and that the first one was way back in 1998. I find that both hard to believe and kind of incredible, considering I’ve never seen them before this.

10. Someone proposed on stage during the show
You hear about on-stage proposals, but I’ve never seen one in real life. That is, I’ve never seen one in real life until Saturday, when MxPx invited a guy named Chad on stage to take part in an apparent dance contest against a person of his choosing midway through “Chick Magnet.” That turned out to be a decoy, as Chad was allowed to use the opportunity to ask his girlfriend Holly to marry him. She said yes! It was a sweet moment that was punctuated by having a few hundred people scatting the end of “Chick Magnet” mere moments later.

11. They played the hits.
As my MxPx listening subsided through the year, I was a little worried their set might be chock full of “new” material (a.k.a. songs released in the past 15-plus years), but thankfully much of it consisted of fan favorites from the ’90s and very early aughts. Once I heard “Under Lock And Key” played second in the set, I figured I would know and enjoy a lot of the songs to come. I was correct.

12. Their new stuff ain’t half bad either!
They did work in a few more modern cuts (including an unreleased song from a forthcoming record), but I didn’t mind that at all. I was happy to hear they their sound hasn’t been stagnant, but it also hasn’t ventured too far from what they do best: play fast, hook-laden, and fun pop-punk. Oh, and one of the new (to me, at least) songs even says “goddamn” in it, which was a bit of a surprise.

13. MxPx is very considerate of its fans
As if wing-manning for Chad wasn’t already kind enough, they also made sure everyone was safe and comfortable during the set. They urged people to practice proper pit etiquette (picking each other up, etc.) and at one point, I saw Herrera walk to the front of the stage, crouch down, and mouth “are you okay?” a few times to someone pressed against the guard rails until they signaled they were fine. They also announced before their last song that there would be a free meet and greet near their merch stand after the show.

14. “Middlename” still rules
That was the first MxPx song I ever heard and it still hits all these years later. For what it’s worth, “Punk Rawk Show” was a fun way to close out the show as well.

15. I’m glad I went
The weather, my motivation level, my bank account, and the decades since my last earnest listening were all wanting me to stay home. Thankfully, I didn’t listen and I finally got to see MxPx live. 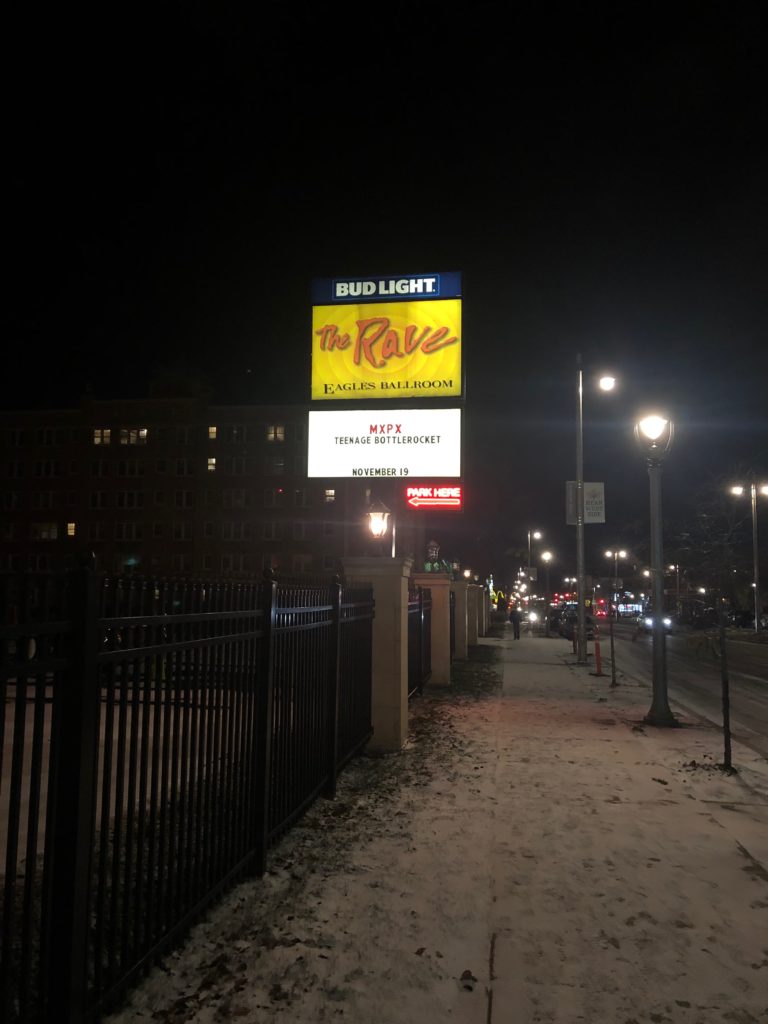