Before last Friday’s show, we dropped by Turner Hall with some of Vanguard’s kitchen staff to have Randy (aka Canadian actor and real life cheeseburger aficionado Pat Roach) eat and evaluate the Durty Burger. Here’s what he thought about the Vanguard specialty and some opinions he has about cheeseburgers in general.

“This is massive. If I got this at your restaurant, I don’t think I’d have to eat a whole lot more than that. I’ve been told that when you wrap a burger in tinfoil like this, it makes the bun extra nice and soft and perfect. Look at that! It’s toasted and there’s even veggies on here. You got the cheese on there. Velveeta…that’s awesome.” 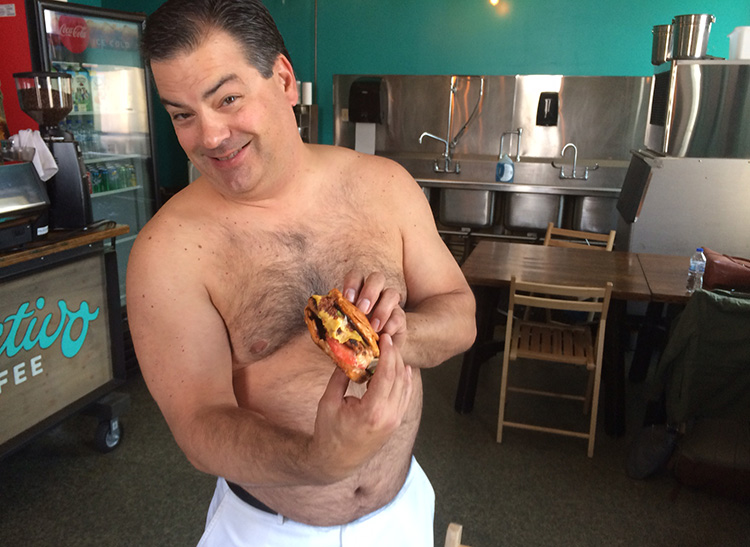 “Wow! Nice. That is an excellent burger right there. I don’t think I’ve ever had a pork burger before. I’d eat a pork burger like this again. It’s got a good spice to it, right? You guys don’t frig around. That’s awesome.” 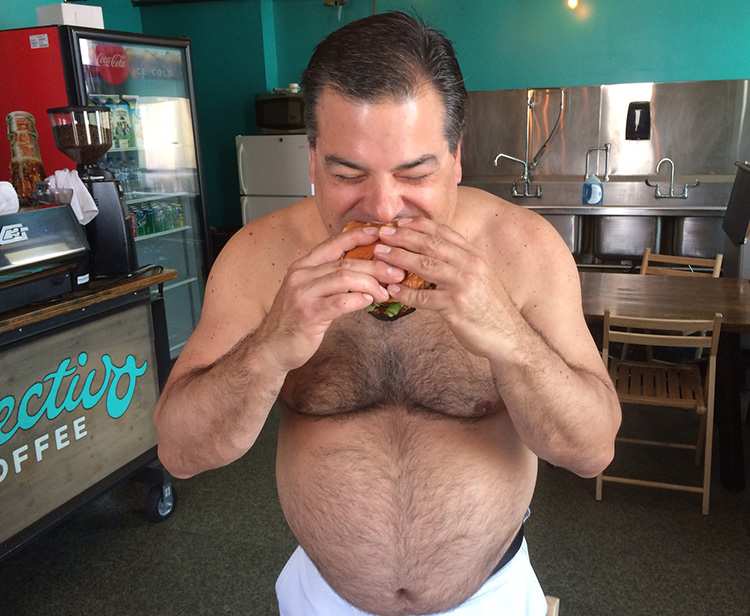 How it compares to the original Dirty Burger:

“Well, I like this because it’s bigger. Dirty Burgers are small, so this gives you more meat. You’d only have to eat three of these, whereas you’d have to eat six [original] Dirty Burgers. And this one has a spice to it, so you can drink beer with it.” 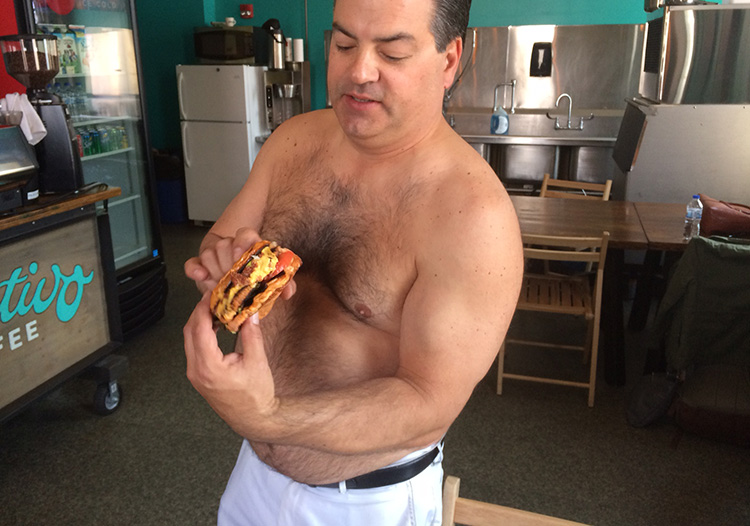 “Things are a little different in Canada, where I’m from. You guys got serious cheese down here. And, I mean, this is Wisconsin—cheese curds, right? Aren’t you the Dairy State? Every time I’m here, I’m given cheese curds, but I’d rather be given your Durty Burger than cheese curds. I like [the Velveeta on the Durty Burger] because it’s a nice, creamy, kind of melty cheese. I don’t mind a good bleu cheese burger though once in a while. Something with a good snap of stinky cheese.”

“I like it all. I like mustard and ketchup on my burger. On a hot dog or sausage, I usually just put mustard or even a spicy mustard, but I’ve been laying off the ketchup. I’ve been told you’re not supposed to put ketchup on a hot dog. I like relish. I don’t mind putting onion rings on a burger.” 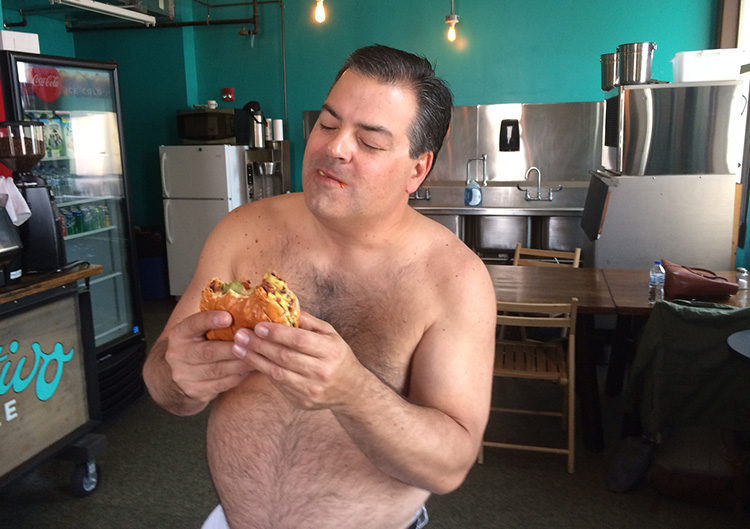 Has he ever had another Dirty Burger or tribute burger?

“I’ve seen some Randy Burgers before. They normally put onion rings on it. There are different ways I’ve seen the onion rings battered—buttermilk, and all these different things. I’m flattered when anybody makes a burger and calls it the Randy Burger or the Dirty Burger because they’re thinking of me. I love cheeseburgers. That’s what it’s all about.” 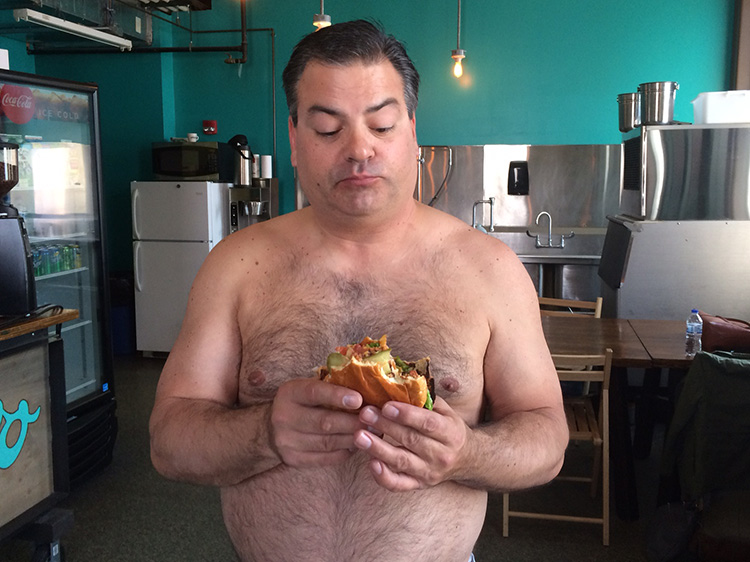 Is there anything missing?

“I don’t think so. I’m flattered [Vanguard] went all out here. [They] did not frig around. This could almost be a breakfast burger. I mean, you could put an egg on it and let it mix with the heat of the meat. (Editor’s note: Vanguard offers a “Durty Brunch Burger” that’s served on weekends.)

“I just want to say thank you. And I want to tell everyone that if you want to try this burger, you can’t go wrong. Now, unless you don’t like spices. It does have a little bit of heat, but that’s what you have beer for.” 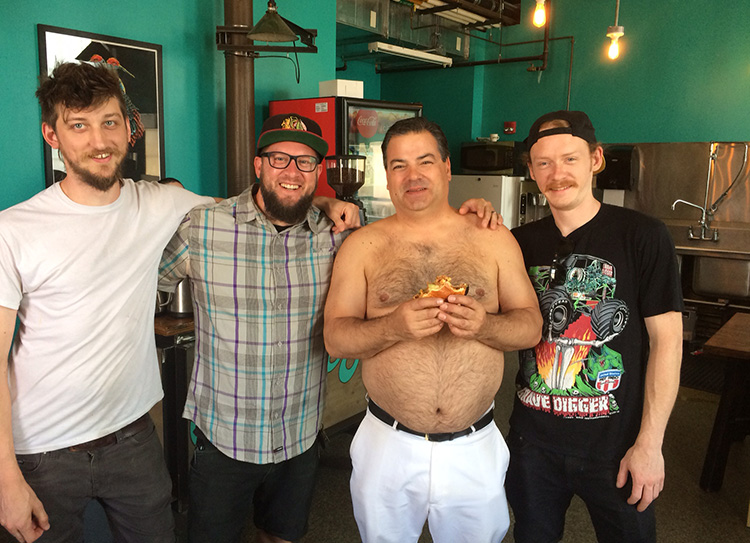 “I’ve never had a burger like this, but I like it because it’s spicy and moist. I love the pickles, lettuce, onion, sauce. It’s perfect. It’s the perfect burger in my mind. I approve. That’s a Randy-approved burger right there. If it’s Randy-approved, it’s gotta be good.” 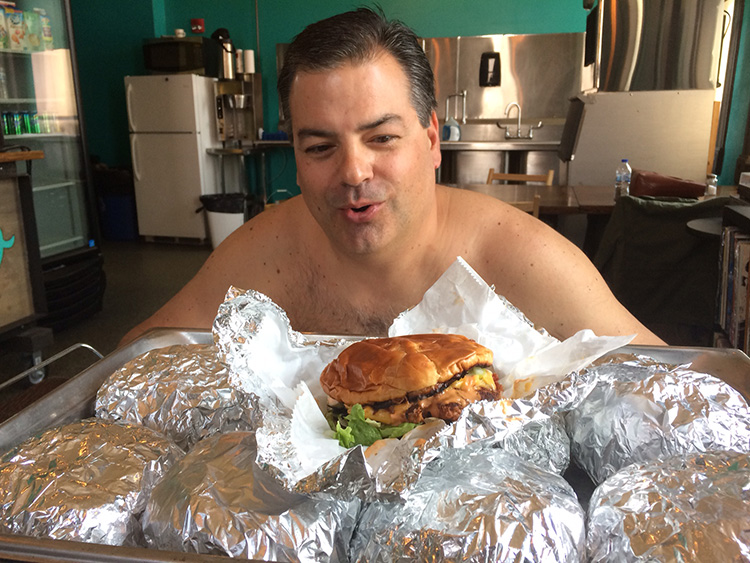