• Netflix is jumping on that sweet, sweet Serial/Jinx bandwagon with a 10-part documentary on Wisconsin murderer Steven Avery. Avery served 18 years in prison for rape before DNA evidence exonerated him in 2003. Two years later, he murdered a photographer, Teresa Halbach, who had come to the Avery family’s auto salvage yard to take pictures. The Journal Sentinel—which is already aboard that sweet, sweet Serial/Jinx bandwagon with “Unsolved”—reported that all 10 episodes of Making A Murderer will be available to Netflix subscribers December 18. (Remember when this stuff was called Dateline NBC?)

• Ian Abston stepped down from NEWaukee this week, which means we’ll finally have to retire this charming screenshot. Best of luck on your next adventure, dude. 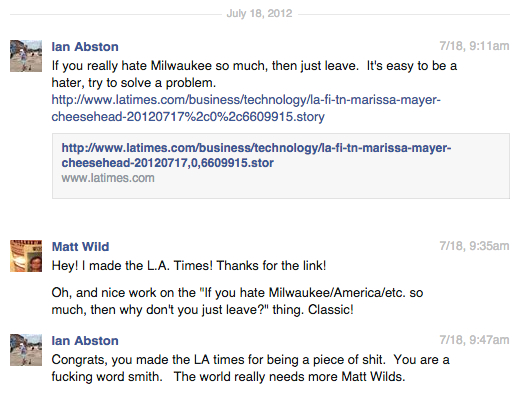 • Milwaukee Magazine investigated the origins of David Gruber’s ubiquitous “One call, that’s all” slogan. Been there, done that (sort of).

• WebsterX and Q The Sun announced a new collaborative three-song EP, KidX, scheduled for release November 17. 2DopeBoyz talked to the ever-busy WebsterX about the Radiohead-inspired project.

• Speaking of great local rappers, Fresh Cut Collective co-founder Adebisi Agoro—who raps under the stage name BLAX—just put out volume 2 of The Headphone Experiment, an encouraging departure from his past work. The first one featured milo and Randal Bravery. This installment includes production from Ceeloe Negron and Motel Eola.

• In this week’s edition of “Where are they building luxury apartments you’ll never be able to afford THIS week?” the answer is: “Across from that swing park.”

• Wauwatosa suspended their relationship with VISIT Milwaukee, said the Milwaukee Business Journal. Back in February, Urban Milwaukee pointed out that the then-newly minted Visit Wauwatosa website didn’t even have directions to Wauwatosa, which may have had something to do with this week’s breakup.

• Kurt Chandler is stepping down as editor of Milwaukee Magazine. In a farewell letter, Chandler informed readers he’ll be going back to his true love, writing, and that Managing Editor Howie Magner will be assuming the duties of interim editor.

• Rosati’s Pizza, located on the East Side in the former Replay/Twisted Fork/Oriental Drugs space, is open for business. OnMilwaukee checked it out.

• And finally, some sad news. Milwaukee fixture, voracious reader, frequent bus-rider, cinephile, DJ, record-hound, and all-around terrific guy Dave Monroe passed away this week. If you knew Dave, you’ve surely seen the hundreds of memorials flooding social media in the last 24 hours (Bobby Tanzilo has a wonderful tribute here). Personally speaking, Dave was always very kind of supportive of my endeavors, even though I felt a bit embarrassed that someone with his deep knowledge and unbridled enthusiasm would bother reading my drivel. In my 19 years in Milwaukee, a bus ride or a trip to the Oriental Theatre wasn’t complete without Dave’s presence. Milwaukee is a less cool place without him. Requiescat in pace, good sir.