There’s arguably never been a better time to ride a bicycle in Milwaukee. There are more dedicated bike lanes than ever, unique bike-centered events that bring riders together all year long, and new legislation being passed to protect cyclists and pedestrians alike. You have Milwaukee Bike Fed (and Wisconsin Bike Fed) to thank for much of that. The organization has spent decades advocating for better biking in Milwaukee and the state as a whole.

June 2-9 marks Wisconsin Bike Week. Starting this Saturday (actually, Friday’s Bay View Gallery Night Rollout unofficially kicks things off), the city will be alive with events and activities devoted to raising awareness and funds for the Bike Fed.  For the past 11 years, Jake Newborn has been Milwaukee Bike Fed’s Youth Programs Manager. He also manages mobile bike repair for the organization, which employs and trains high school students in bike mechanics.

Before the week begins, Newborn filled us in on the Bike Fed’s mission, ways Milwaukee is a special place to ride, things that still must be done to improve biking in Wisconsin, ways you can help, and why you should attend this weekend’s inaugural Bike Fed Fest.

Milwaukee Record: Would you explain what the Bike Fed is and who it serves?

Jake Newborn: The Wisconsin Bike Fed is a statewide advocacy and educational organization. It’s a non-profit that’s basically working to make your bike ride better and trying to normalize biking. Our goal is to get more people on bikes and engage businesses, residents, advocates, community leaders to make biking better for anyone who wants to get on a bike, anyone who’s thinking about getting on a bike, or is already on a bike.

MR: In your 11 years on the job, how have things in regard to biking in Milwaukee changed, evolved, or grown since you started?

JN: The political scene has been challenging at a statewide level. Funding gets cut. They don’t allow as much funding for bike and ped projects as, say, Minnesota and Michigan, so that’s always been a challenge. We’ve definitely seen a lot of growth in Milwaukee and I think there’s a lot to come. The DPW and the Common Council have plans, but local and state governments don’t always act fast. It might take several years for grants to be implemented and plans to occur. Here in Milwaukee, we have the Hank Aaron State Trail. In the past 11 years, that’s grown immensely. We have the Oak Leaf Trail connection on the Northside, which allows you to connect to the inner urban and all the way up to Sheboygan.

We’ve seen the number of people riding bikes increase. Qualitatively, when I started riding my bike daily and calling myself a cyclist about 12 years ago, you kind of knew everyone you saw. Now, I ride and I can’t even count everyone I don’t know. I think it’s growing. I think there’s a lot of what we call “interested but concerned riders” who will go out on a trail on the weekends, but they won’t ride down a bike lane because of traffic. Those are the sort of people I feel like we need to keep pushing for in the future to accommodate. The Bike Fed has been working for some protected bike lanes, which has offered some physical barrier separation.

MR: I feel like you’re hitting on it, but what are some ways things can be improved on either an individualized level or things you hope to see implemented in the state?

JN: Well, governmentally, there’s Transportation Alternative Funding or “TAP Funding.” Currently, about half of what’s allotted from the Federal Government to the state is used for freeway projects, so we’d like to see it fully funded and kept within Bike Fed projects. We’re working right now to pass a Complete Streets Policy with the Milwaukee Common Council, which means that any street that’s rebuilt or reconstructed has improved accommodations for bicycles and pedestrians. In the short term, we’re also seeing protected bike lanes coming in on Locust and North bridges. We have plans for Fratney Street in Riverwest to become a “bike boulevard” that prioritizes the flow of bikes but doesn’t disallow cars. Those are easy changes to make. When you’re reconstructing a street, that’s the time to make improvements.

MR: You’ve touched on a few of the aspects already, but as an active rider, what are some of the things that make Milwaukee special?

JN: We have the trails and things like that, but I think the thing that sets us apart and what we should be really proud of of is the community and the fun events. We’ve got the Underwear Bike Ride, which has grown immensely over the past 10 years. You’ve got the Bike-In Movie series, which volunteers have no taken over. We’ve got the Bay View Gallery Night Rollout coming up. There’s the Santa Rampage, and the Polish Moon on June 22. These unique family events community-based types of rides are what we should really be proud of. 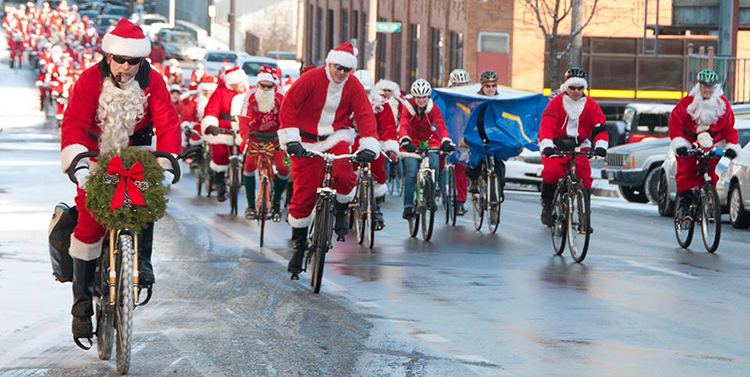 MR: I feel like a lot of the events later this week and next week will only help awareness. Are there any events in Milwaukee that you’re excited about?

JN: Bike Week is a way to get out and to raise awareness for bike activities and to offer opportunities for people to try new things. We’ve got a ride with the mayor and some city aldermen. If you join as a member, you get a Bike Week fun pass that gives you discounts at Adventure Rock and beer gardens. Then we got Bike Fed Fest, which is kicking off [Wisconsin Bike Week]. The goal of Bike Fed Fest is to reach people who are just going to a show. We want to draw you in with diverse bands and fun times, and then tell you all about the Bike Fed and hope you think about another event. We want everyone to be on a bike. We want the common everyday Milwaukeean to get out on a bike.

JN: As a driver, if you don’t ride you bike but don’t want to hurt people, give bikes three feet of space when passing, yield to pedestrians crossing the street and sharing the road. If you just ride in the summer on the weekends, we want you to contact your alderman about the Complete Streets Initiative. For those people that do ride, becoming a member helps provide us funds to work on all the different projects that we have going. Becoming a member just helps support all those efforts.