Back in 2012, Milwaukee-area funnyman Reuben Glaser achieved a small bit of Internet notoriety with “Little Face Mitt,” a website devoted to Photoshopped images of then-presidential candidate Mitt Romney with an unnaturally small face. The meme caught the attention of Buzzfeed, Funny Or Die, MSNBC, and many other media outlets, and even ended up being used for computer backgrounds in President Obama’s Chicago reelection headquarters.

Now, three years later and ahead of another presidential election, Glaser has resurrected the “little face” concept with “Tiny Face Trump,” a meme devoted to, well, you get the idea. Before Glaser’s “Guy’s Flavortown Showdown” attempts to convince at least one person to show up at today’s Trump rally in Florida dressed as Guy Fieri, Milwaukee Record spoke to the affable humorist and filmmaker about his brushes with Internet fame, ugly politicians, and the secret to parodying the self-parodying Trump.

Milwaukee Record: Before we begin, let’s get the big question out of the way: Did you ever sell your car?

Reuben Glaser: You can bet that I did. I sure as heck did. I don’t remember when it was, but it was a while ago. I did sell my car, and have since spent every cent paying back student loans. I’m still in debt, but a little less in debt now. I sold it to a nice fellow from the ACLU.

RG: I suppose it started when I was reading The Onion of yesteryear. There was an article about Mitt Romney and they had this strange picture of him where it looked like he already had a small face. So I thought, “I’m going to make it small on my own time just so I know what it looks like.” I don’t know why I thought it had any legs, but I made a Tumblr for it. I had fun doing it because it turns out his face is really easy to shrink—really easy, a lot easier than Donald Trump has proven to be. Then the guy who did the “I’m With Coco” poster posted it on his Tumblr, and from there it kind of exploded, I suppose. It started its now dead life. I had a fun couple of months with it.

MR: Well, it did garner a fair amount of national attention. Did the ensuing Internet fame change your life?

RG: Briefly it did. Now I’m sort of back to the beginning. But what I can say is that at this point, my most resounding contribution to human society is that if you Goggle Mitt Romney—just the name “Mitt Romney”—and if you look at the Google Images results, you will see a picture of him with a small face. So I’m assuming if Mitt Romney is ever feeling a little sorry for himself and Googles himself, even the Mitt-ster himself will probably see himself with a small face.

RG: Hopefully that doesn’t mean I’ve already peaked. But if it does, well, at least I did something with my life.

MR: Moving forward to the present day, why did you decide to resurrect the “little face” concept for Trump?

RG: First, I tried all sorts of other things that I thought would be fun and catch on with the Internet, but none of them did. But the Little Face Mitt page had like, 14,000 goddamned likes or something stupid like that, and I was getting comments from people like, “Little Face Trump! Do a Little Face Trump!” That was the only interaction the page was getting anymore. So I thought, “Well, I’m shameless. I guess I’ll give the people what they want.” It caught on a little bit, I suppose.

I personally don’t think it’s as funny, because Donald Trump is already an idiot as it is. I don’t feel as emotionally proud and invested with TFT as I did with LFM. But whatever. Some people seem to like it. It helps pass the time.

MR: Is there any sort of endgame you have in mind with Tiny Face Trump?

RG: The ultimate goal, really, would be to get him to acknowledge it in some way, shape, or form. I would love to be on his long list of even mild enemies. Is it a lofty goal? Yes, but it’s one of those dreams that helps me sleep at night.

MR: There was a New York Times piece earlier this week about how comedians are having a hard time with Trump. Basically, it’s difficult to effectively parody him because he’s already a parody of himself. Have you experienced that with Tiny Face Trump?

RG: Well, you’re right. He is a parody of himself. He’s probably the ugliest man who has run for president since…I don’t want to say Ross Perot. Probably since, let’s see here…Dewey. The guy who ran against Truman. That was an ugly guy. Since Dewey then. Donald Trump is the ugliest guy, weirdest-looking guy, and has the strangest haircut in politics since probably Horace Greeley.

With Donald Trump, I think the funniest thing to do with him is distract him from whatever else he’s doing by getting him irritated with petty things. That’s basically the only reason I feel compelled to push ahead with Tiny Face Trump. With Mitt Romney…obviously Mitt Romney is never going to comment on it. But Donald Trump is the type of guy who I could see bringing it up during a rally, swearing about it and going on a tangent about it. [Slips into Donald Trump voice] “Now you’ve got these losers, they’re uh, they’re shrinking my face! What’s that about? I don’t know!” I doesn’t even seem that far-fetched. I think to distract Donald Trump with things of no substance that are completely worthless is probably the best approach comedians can take. 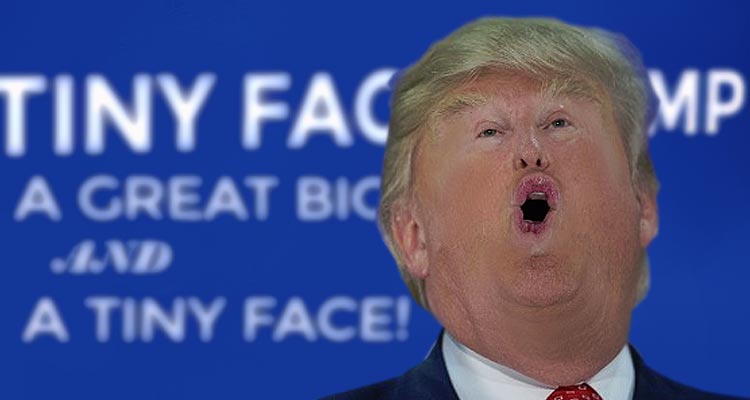 MR: So is that what you’re trying to do with your fake Guy Fieri event? Hoping he’ll react to a minor annoyance?

MR: You’ve done some video work with political campaigns in the past, and you had a great video a few years ago of Paul Ryan milking a goat. What draws you to political humor, and politics in general?

RG: Political humor is what it is. I’ve since found I’m not particularly interested on the inside of politics itself, especially since you can’t really be too funny when you’re in a campaign. I suppose I like political satire because everybody plays everything so straight-faced, and most of these people are absolutely awful people. The worst people you can imagine, pretending everything they’re doing to forward their own agendas is to benefit the country. And I just like insulting these people.