Who doesn’t love a good Nazi? Um, let’s rephrase that: Nazis make the best villains. What would pop culture do without those swastika-sporting, goose-stepping genocidal goofballs who combine unspeakable evil with distinct fashion flair? Add to them the vampire craze (that started classy with Ann Rice, peaked with Buffy, and went down the tubes with the Twilight franchise) and you get Dracula Vs. The Nazis, a comic book comedy opening this week at In Tandem Theatre. It might be the greatest combo since peanut butter cups: two great villains that go even better together. At the very least it will answer the question: If Dracula and Hitler fought, who would win?

When asked if In Tandem, when deciding to do the show, had any idea the title would fit so perfectly with how most people feel about the presidential race, director Jane Flieller laughs. “I couldn’t have foreseen this election,” she says. “This is just the kind of show to get your mind somewhere else or use it as your parallel universe. It’s silly, it’s easy, you know. It’s not meant to change your world view. It’s just like the escape you get from comic books. Just go with it.”

“Let it wash over you,” interjects her husband, Chris Flieller, who plays half of the many roles in this two-man show. 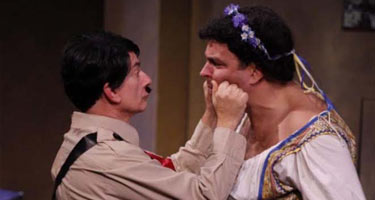 Originally written and produced by Michael Neville in the early ’90s, this “madcap comedy” involves an occult device called “The Pandemonium Wheel” that confers immortality. The English enlist Dracula’s help in a desperate gambit to stop Hitler from using the Wheel to create a deathless army. “To a millennial audience,” Jane says, “this is going to feel like a graphic novel onstage. The dialog is quick and snappy, the scenes are short. The superheroes I find intriguing are the ones that have a crisis of conscience, like the Dark Knight Batman. He’s not necessarily a nice guy. Dracula has been around for thousands of years, he’s done some pretty awful things, yet he’s gonna save the day. He needs humanity. If Hitler wins, the children of the night can’t survive.”

“Dracula is kind of an antihero,” Chris adds. “He has some menace to him, but he’s always had a kind of allure as well. It gets a little crazy in the second act. There’s a parallel universe, and lots of different locations, and relationships between all these characters, who are all played by just these two guys.”

A lot of the fun of the show comes from watching Chris, a master funnyman, and his partner Doug Jarecki flip back and forth between more than a dozen characters with lightning-fast costume changes. Jarecki, who plays Count Dracula, among many others, says, “One of the real challenges is, something like this with goofy costumes can turn into just shtick very quickly, if you don’t stay grounded in what these characters want, how they go about getting it, and their own personal stories. If you’re playing only one character, you take that natural journey. But with different characters moving at different paces in this show, it’s pausing that character while remembering what’s going on with this next character, and then getting back to that same spot.” 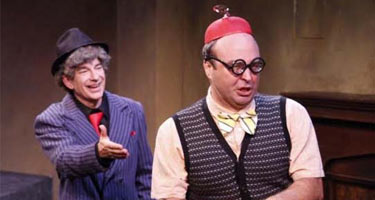 How do they handle such a physically and technically demanding show? “Doug uses vodka, I use bourbon,” Chris quips.

“And I’m all about the tequila,” Jane chimes in.

Chris is the first to volunteer his favorite character. “I have to say that though I love them all, I get to play Dracula’s old flame, who’s a female Venezuelan vampire. She’s a very sensual being.”

“I have a crush on Renfield, always have,” Jane says.