Milwaukee has some great Christmas traditions. The Milwaukee Repertory Theater performs A Christmas Carol every year. The LED-decoration arms race of Candy Cane Lane makes WE Energies smile. Soulless automatons howl Christmas carols into the void of an empty temple to commerce. Recently, the Riverside Theater took steps to start a new Christmas tradition by offering a four-night stand of performances by the Milwaukee Symphony Orchestra. It lured several families through the snowstorm over the weekend to experience a live performance of a film score that’s become connected with the holidays because of its release 15 (!) years ago: Harry Potter And The Sorcerer’s Stone.

Though much of the weekend’s attention in the press and social media had been devoted to that other big franchise’s new release, Harry Potter has become a powerhouse in its own right by grabbing the imaginations of kids, teens, and adults, while putting together a film series without a bad one in the bunch (unlike most big tent franchises) The first film is often considered to be the weakest in the series, thanks to leads that haven’t quite grown into their talents, a fairly journeyman director, and a lot of worldbuilding and pipe-laying for the greater saga. The film still has plenty of strengths, one of which is another classic film score by John Williams. The score does for xylophones what Raiders Of The Lost Ark did for trumpets. Hearing it live offered a great experience for the audience who might not have seen the film in theaters when it was first out. It also seemed like the orchestra was having fun playing a film score rather than something more traditional. Only at a show like this would a crowd raucously applaud and shout after a harp solo during a scene where the heroes sneak past a sleeping beast. 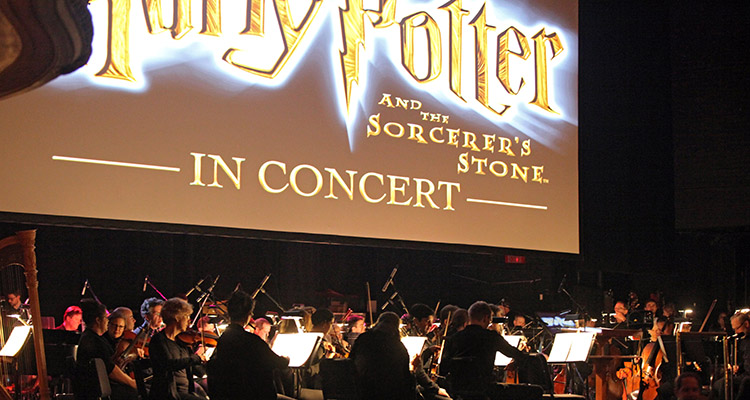 The hybrid nature of the event offered a few divergences from the usual. The conductor encouraged the audience to cheer and boo the characters, with Draco Malfoy getting the lion’s share of shade from the audience. Loyal audience members also cheered wizard house mentions—though fans in Milwaukee who are part of Slytherin should know their house rates in popularity somewhere between Jay Cutler and Sam Bradford. The end of the concert marked a grey area in show etiquette. A few large families headed out as the credits rolled to get ahead of the snow. Some audience members did, too, since wandering out during the credits of the film is standard operating procedure in movie theaters. In this case, it was the orchestra’s big finish, and their last number caused several audience members to linger with coats on as they ran through the reprise of many of the evening’s themes.

Miss Manners will have time to deal with this issue, as the Riverside has announced the program will return with a live performance to the second film, Harry Potter And The Chamber of Secrets, in December of next year. Until then, the crowds that came dressed for the symphony—and the ones that cosplayed—headed out into the snowy night satisfied.