Bob Dylan is one of those musicians whose work seems to touch everything that’s come along since, either directly or indirectly. Whether you enjoy his unique brand of music or not, there’s no denying that he’s written a remarkable number of incredible songs over the past 60-plus years. While he’s certainly put out more than his share of albums and live recordings and bootlegs and more bootlegs, it’s always interesting to see how subsequent musicians absorb and reinterpret his songs. Artists who have recorded Dylan songs include contemporaries like George Harrison, Johnny Cash, and (of course) The Jimi Hendrix Experience, but also PJ Harvey, The White Stripes, and Rage Against The Machine.

Over the past seven years, here in Milwaukee, Jeff Harrington has organized an annual benefit show at Linneman’s Riverwest Inn wherein local artists come together to play one of Dylan’s albums—a different one each year—and raise money to benefit the Alzheimer’s Association. The combination of efforts between Harrington, Jim Linneman, Marty Hacker, and a variety of local musicians have made these yearly shows into very special events for everyone involved. “We’ve had great, enthusiastic audiences from the first year,” Harrington says. “It’s been incredible to so deeply explore these albums. You get inside them in a way you wouldn’t normally. The breadth and depth of his work is just staggering.”

This year’s show will be particularly special as it will be the last of its kind, and it will feature Harrington’s favorite Bob Dylan album: the 1975 classic Blood On The Tracks. The 15th in Dylan’s immense catalog, Blood On The Tracks is widely regarded as one of his very best. A long way from the rough-edged folk and rock music of 1960s Dylan, the album is a beautifully produced collection of possibly-autobiographical songs about heartbreak and a deteriorating relationship.

Harrington explains, “I have certainly been a Dylan freak at certain stages of my life, and my impression is that Blood On The Tracks is most Dylan freaks’ favorite album. It is certainly mine. I first heard it as a freshman in college, and proceeded to listen to it on cassette every day for a year. It’s just so incredibly intense and mystical. The vocal performances and lyrical imagery are so dramatic.”

For such an occasion, it only makes sense to bring in a cast of musicians who have the capability and passion to tackle this kind of material, and Harrington’s group has done just that. This year’s lineup includes Peter Roller, John Sieger, Alex Ballard and Sugarfoot, Devil Met Contention, and John and Robin Graham of The Cow Ponies.

“These are all local talents you should check out, if you haven’t,” Harrington says. “Peter Roller will be laying down some of the hottest slide guitar you’ve ever heard, I guarantee it!”

“Blood On The Tracks Revisited” will begin at 9 p.m. on Saturday, May 18 at Linneman’s Riverwest Inn. Cover charge is $8 and all the proceeds benefit the Alzheimer’s Association. “It makes the night more meaningful to know that the money is going to a good cause. There’s hardly anyone who hasn’t had an experience with this really difficult disorder,” Harrington says. 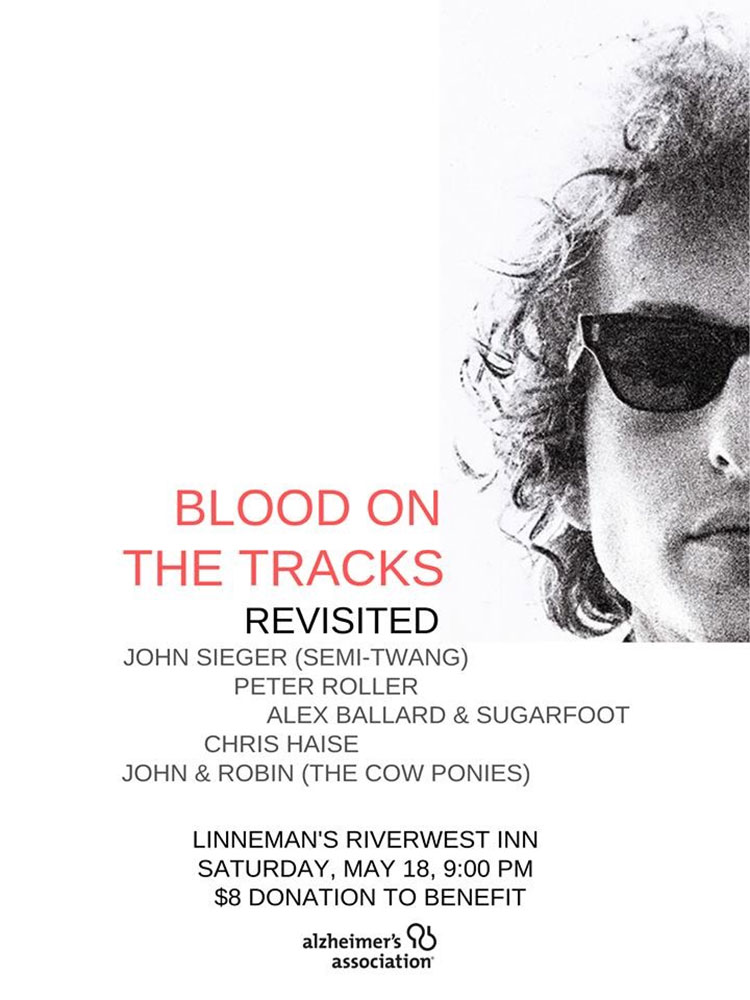