Since being founded by then-Milwaukee percussionist Jon Phillip in 2011, Good Land Records has released dozens of albums, EPs, and 7-inches from a wide variety of Midwestern musicians such as Direct Hit!, Joesph Huber, Brett Newski, Telethon, and Rx Drugs. Along the way, they’ve also sprinkled in some releases from renowned projects based all over the country. One such non-Midwest anomaly is The Figgs.

Though the long-running rock band got its start in Upstate New York way back in 1987, The Figgs have pretty much been adopted as an unofficial Wisconsin commodity. They’ve played dozens of shows in the state through the years and have won legions of fans and friends in Wisconsin along the way. In fact, the band is currently in the midst of a four-show jaunt in support of its just released Chemical Shake album, and THREE of those concerts are in the Badger State.

Prior to tonight’s show in Madison, Friday’s performance as part of the Good Land Records “11-Year Anniversary Party” at The Cooperage, and a Saturday outing in Green Bay, Milwaukee Record spoke with Figgs bassist/singer Pete Donnelly about new output, the band’s love affair with Wisconsin, and his tendency to release lots of music in very quick spurts.

Milwaukee Record: I think before I even actually heard The Figgs, I knew about The Figgs being a big deal to people in Wisconsin. Even though you have no direct Wisconsin affiliation, you’re kind of seen as this unofficial Wisconsin band.

Pete Donnelly: Yeah, I mean, Wisconsin has kind of always been our second home. We can pinpoint it to just that moment when we played there in early ’94, I think. We were opening for The Knack and Boris The Sprinkler was on the bill, so right then and there, we connected with [Reverend] Norb and some other folks there. They seemed to carry the torch for us and they had some influence. I don’t know, it just was some kind of this strange, organic process where Wisconsin became a second home for us. We started going back a lot and people seemed to really appreciate that.

MR: It seems like it was initially the Green Bay scene that adopted you, but as a contingent of those Green Bay people left, you now also have a home base in Milwaukee, Madison, and even the Fox Valley, too. I would imagine it’s hard to be a band from the east coast touring in the Midwest, but I’m sure it’s nice to know you have that built-in support system.


PD: Absolutely. One thing we’ve learned from all the years of touring is only go back to the places that are good. You know what I mean? You go to Chicago, and Chicago can be great, but sometimes—like in New York and San Francisco—there’s a sort of attitude of some people in those cities that are less excited and less fun. Then you go to 100 miles away to Milwaukee and people are just ready to have a damn good time. That always feels great. 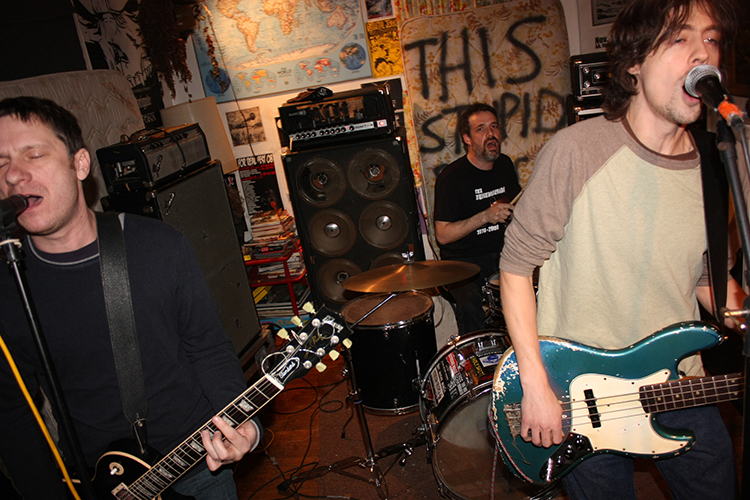 Photo: The Figgs at BFG in Appleton ’09, courtesy of Andy Junk

Chicago is great, too. We’ve had a tons of great shows there, but there’s just such a different feeling. It’s like going from Boston to New Hampshire. People are less inhibited. And there’s a real rock and roll spirit in the state. I just think it’s a great thing and we’ve found some good friendships there.

MR: One of the good friendships is Jon Phillip from Good Land Records. I know he put out one of your albums, at least.

PD: I think a few. He put out the box set, which was a Mike Gent record, my solo record and a Figgs record—Slow Charm. He did that, he did one of my records—Face The Bird—he may have done another Mike record, and gosh, he may have done other Figgs records. It’s terrible that I don’t even really know.

MR: Well, that happens if you have literally dozens of releases between full band LPs, solo albums, and stuff on EPs and one-off comps. Even for you individually right now, you’ve put out the second installment of an experimental record this month, then an EP back in January, and a solo album last June. That’s a lot of stuff in a very short window!

PD: Well, it was COVID year—or COVID two years—so I was trapped in the house with a studio. I’m just not one of those people who believes the greatest art is made by young people. I feel like I’m constantly searching for how to make more of it, and how to connect with it, and how to grow with it. It’s kind of like a life force. If you feel it, you should do it. I know a lot of people who give up music when they have families. My advice to people as they reach a certain age is maybe set it aside, but don’t give it up because it will probably come back and you’ll be happy to have that dear, dear friend right there with you. For me, music isn’t about being virtuosic. I like the limitations of what you can create when you have limited access. That’s kind of the fun of it.

MR: And in addition to your solo work, there’s new Figgs album coming out called Chemical Shake. All the branding and marketing I’ve seen says “sometime soon” and I know it has 12 songs. That’s about it.


PD: It’s funny. The industry standard of a three-month set up for a release, we’re so outside of that. We’ve cast all those things completely out the window, so when people are like, “What’s the release date?” I’m like, “It’ll be the first day we have the product in hand and you can see us. That’s the release date.”

MR: So you have that coming out [editor’s note: it can be purchased on CD at shows now and will be available on Bandcamp and the band’s website May 6] and the new solo albums are out, too. Is there anything else you’d like to say?

PD: Let’s just say The Figgs are rocking strong, recording as much as we can, and we’ve got all kinds of catalog stuff that we want to get cranking on. There’s no slowing down for the band and we’re excited to get out there and play. Please keep your eyes and ears out for wherever we are because we definitely want to see you.

You can see The Figgs at Kiki’s House Of Righteous Music in Madison on April 28, at The Cooperage in Milwaukee on April 29, and at Lyric Room in Green Bay on April 30.