Stop us if this sounds familiar: you’re in a hot-shit up-and-coming Milwaukee band. You work a day job because it’s not like someone’s bankrolling you, so you don’t get to tour as much as you’d like, maybe a week or two per year. But playing Milwaukee constantly can get a little old, to say nothing about stretching your draw a little thin. Sure, you can play once a month in Bay View and Riverwest, but not everyone refuses to leave their neighborhood for shows, so how many times can the same people come see you? If only there were some other options within an hour’s drive time that would allow you to get in front of some different crowds while still getting you back in your own bed at night and only minimally bleary-eyed at work the next day; like, maybe some smaller cities outside of Milwaukee County, but not quite as far as Chicago. But where could they be?

Racine and Kenosha are a stone’s throw south on Highway 32 and have an oddly untapped reserve of enthusiasm for new, original music. While Racine’s not necessarily known as a DIY hotbed, Kenosha has a long, rich history in hardcore punk circles, and has produced Keno-to-Milwaukee exports like Heat Death and members of Dorth Nakota while remaining home to killer, diverse acts like Fowlmouth, Donoma, and Ash Can School. Most importantly for a Milwaukee band looking for an easy trip out of town, there are a slew of bars and music venues in both cities always eager to host original bands. For Milwaukee bands, it’s really a no-brainer—who wouldn’t jump at a chance to beef up their schedule with fresh crowds while still being able to head home at the end of the night? Here’s a list of five clubs in the Racine/Kenosha area making some noise for hosting some noise.

McAuliffe’s Pub
3700 Meachem Rd., Racine
JJ McAuliffe is a rock ‘n’ roll lifer, having done a tour of duty with legendary Milwaukee space-rockers F/i. For the last 20-odd years he’s held down the fort at his two McAuliffe’s locations in Racine. The Meachem Road locale is a 125-capacity room with a black and white checkered-tile stage, full PA and monitors, and friendly regulars who have recently been graced with Milwaukee acts like Dead Is Dead, Hot Coffin, and Heavy Hand. Every December, the club holds Blankfest, a two-night party and donation drive collecting blankets for Southeast Wisconsin’s homeless. Punk, indie, metal, and sure, even cover bands fill the calendar here and are greeted with open, enthusiastic ears eager to check out anything live, even on less busy nights. 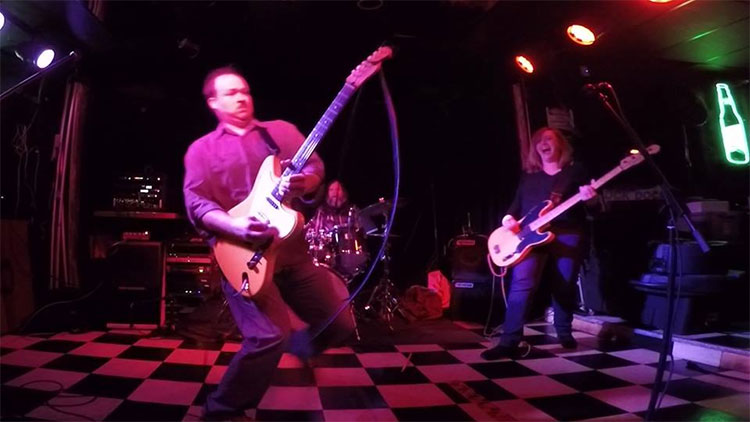 Hattrix
2425 60th St., Kenosha
With black textured walls framing its narrow but spacious (125 or so) performance room, the stage area of Hattrix feels like rocking out in a cave, which is appropriate because Hattrix’s crowd likes their music primitive and loud. The local flag-bearers of Kenosha’s long punk/hardcore history use this room quite a bit, and metal, thrash, and anything else with volume is welcome. The venue also until recently was one of the stops on Kenosha’s annual Ride of the Living Dead zombie pub crawl; the walls of Hattrix sweating from a throng of inebriated moshing zombies is an experience that we can accurately say sticks with you.

Evelyn’s Club Main
331 Main St, Racine
Evelyn’s may be lacking some of the amenities of McAuliffe’s and Hattrix—namely, a stage—but this humble hole in the wall on Racine’s main drag makes up for it with pure DIY gusto. Bands set up on the floor after the pool table gets moved, no cover is charged at the door, and bands get paid out of the bar—and people certainly do drink at this bar. Main booking dude Tom O’Connor is doing his damnedest to establish Evelyn’s as a destination bar for bare-bones punk rock fun, including letting Heavy Hand’s Anthony Weber organize the annual Bitterfest all-day band marathon fundraiser, which expanded to two days this past January. Sure, the sound in here is a bit bouncy, but Evelyn’s has a basement show feel, what with the fans crowding up against the band with no more than duct tape on the floor designating the “stage area.” If that’s your kind of scene, Evelyn’s will be glad to have you. 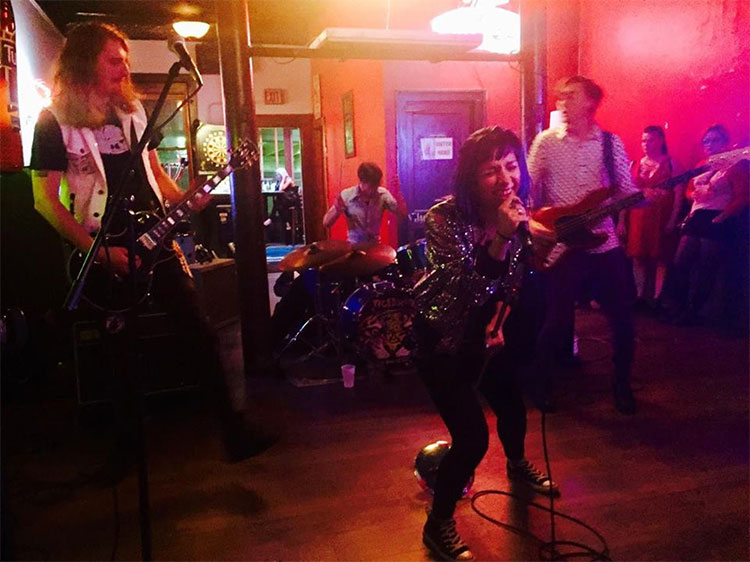 TG’s
4120 7th Ave, Kenosha
A corner bar and grill with an expansive parking lot that buzzes with outdoor activity in the warm months, TG’s interior is a cozy, classic Wisconsin tavern, all wood grains, mirrored walls, and patterned tile. Bands generally set up behind the front window and play on the floor to crowded tables of music lovers. But while the crammed floor setup is similar in functionality to Evelyn’s, the TG’s crowd skews slightly older and generally favors more stripped-down, lower-volume fare, while still bringing the enthusiasm. The outdoor lot, of course, has more versatility and is a great place to play a midday show in front of 200 rowdy bicyclists kicking off the summer’s annual Handlebars & Bars bike crawl.

George’s Tavern
1201 N Main St, Racine
Just up the street and over the bridge from Evelyn’s is possibly the best-sounding room in town—the red-carpeted, wooden booth-trimmed dining/performance room of George’s Tavern. The egg crate foam on the stage walls combine with the carpeting to focus the on-stage sound and provide a top-notch sonic experience. The supper club décor and $6 1/3 pound burgers add to a chill, townie vibe that hosts a diverse array of tuneage, recently welcoming acts as diverse as Something To Do, WORK, and Chicago doom-shredders Jap Herron. 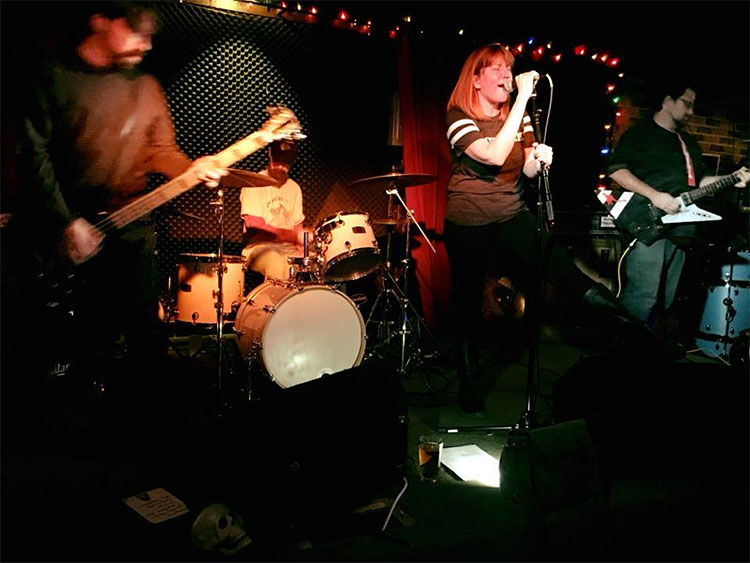 Don’t feel bad about choosing one venue over another to make your Racine or Kenosha debut—these clubs exist in a zone of cooperation and mutual support. You’re likely to see the Evelyn’s crew at McAuliffe’s or checking out a band at George’s if the schedule allows. Somewhere in the deep Southeast along Lake Michigan, there’s a bar for your band and a crew waiting to meet you.