Both tonight and on February 5, Riverside Theater will host a live rendition of The Price Is Right. The touring show gives people all over the country an opportunity to watch and participate in some of the games that have helped make the show a popular piece of American culture for more than 45 years. As fun as seeing a live The Price Is Right show in Milwaukee seems, there’s clearly no substitute for the original.

Back in 2008, the members of veteran Milwaukee band Holy Shit! decided they would make the trip to Burbank, California to attend a taping of the seminal daytime program and to try their luck at winding up on Contestant’s Row. Naturally, they decided the best way to fund the cross-country van trip to The Price Is Right‘s studio and back was to book a 22-day, 21-show tour to coincide with the audition date they were given.

Since we couldn’t properly do this story justice, we asked Holy Shit! drummer Eric Apnea to recount the band’s rationale for doing this and to share his experience of trying to get on one of the world’s most popular game shows. Here’s what Apnea had to say:

So, I don’t remember why, but as a band we decided we would like to see a taping of the Price is Right. Maybe I had been watching it and saw at the end that it’s free and all you have to do is call a number to get tickets. So I did this a couple months beforehand and the date we were given was Tuesday, December 9. So, I did the usual thing and booked a tour around being in Burbank on December 9.

Anyway, this Monday night show—that I’m pretty sure got moved to a rave spot in very downtown L.A.—goes off very well and is an earlier all-ages-type thing and I think we left there at 11 p.m. Tabman left to go hang out with Adam Klarner and Fergie from Black Eyed Peas’ younger sister. Andy, Tony, and I did not want to pay for a hotel at all, because fuck that. So we decided to sleep in the Albertson’s parking lot nearest to the studio where TPIR is filmed. They had Tab, which kicked butt, and we just got drunk in that parking lot and tried to sleep as much as possible.

The way the tapings work is that you have to arrive around 5:30 a.m. and get in queue. They tape two shows a day and you get placed in the early or later taping based on what time you arrive. So we were in the 11 a.m. taping. Anyway, we come back at 10 or whatever time they told us to.

We queue back up and go through a producer’s line audition. Which meant about eight people all stood in line and answered producers’ questions so they could decide who would actually get to go up front. So we told them we were a band on tour from Milwaukee, and one of the dudes is like, “I wrote tons of music for all kinds of programs, including this one” or some such thing “What kind of music do you play?” We probably just said “hardcore punk” or something. I don’t remember. So that was that.

Entering the studio it is very small. Maybe 80 people were in there. We were seated in the last row, since we apparently are not TV types. I can only remember two specific things from the taping. 1. The first item up for bids was like four pairs of designer shoes. I think the total cost ended up being like $2,800 or something crazy. As soon as the cameras stopped rolling, Drew Carey said something along the lines of “Three grand for four pairs of shoes! We really gotta keep the status quo upheld here, guys!” Then later on in the show, they brought up some guy who apparently is always there to be on stage with Drew. It was all off camera. They were just honoring the fact that he apparently lives there, waiting to someday get on Contestant’s Row.

A couple of the other guys had a memory that the woman who won the Showcase Showdown was parked next to us in The Price Is Right’s lot. I didn’t really remember that. Then none of us remembered what we did after. My guess is that we drove to San Diego. We didn’t have a show that night and it was probably easier to just get the drive out of the way. 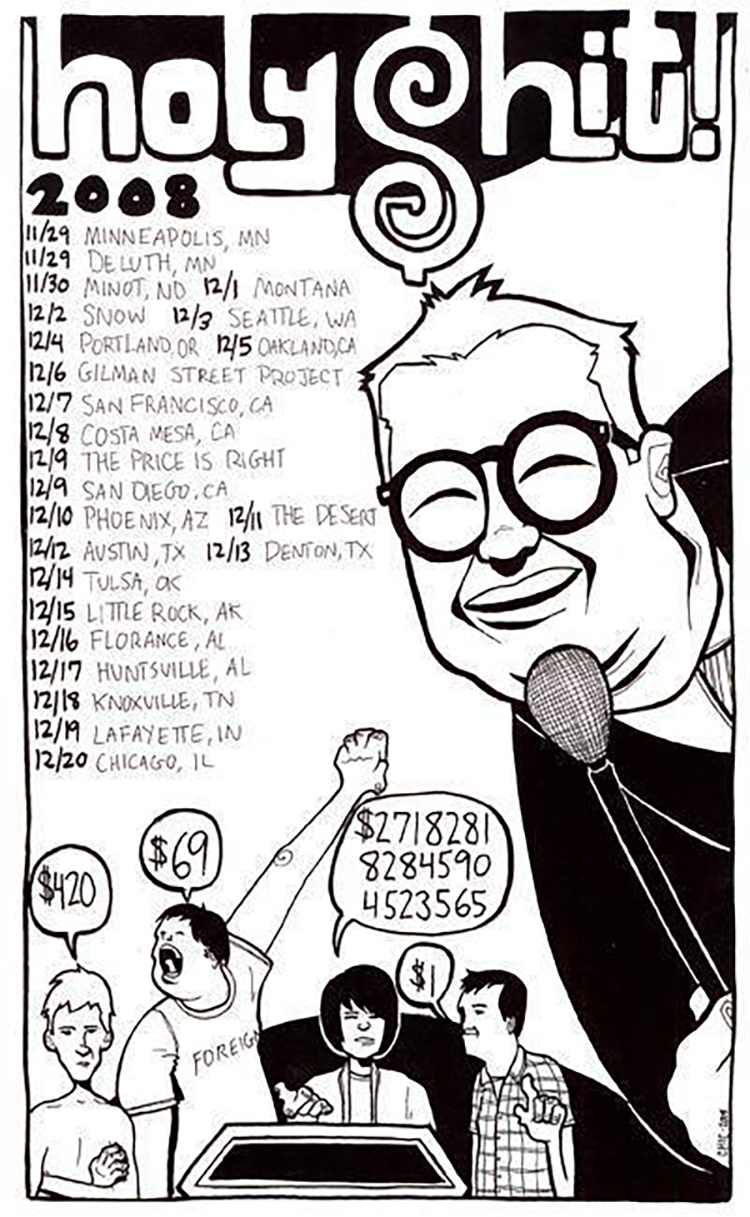