Bartolotta Restaurants seem to have a sizable stake in metro Milwaukee dining. At this point in time, it’s almost more strange for a new dining establishment to open in or around Milwaukee and not be nestled beneath the restaurant group’s sweeping and sterile ownership umbrella. This spring, the eatery entrepreneurs who brought places like Harbor House, Lake Park Bistro, Joey Gerard’s, Mr. B’s Steakhouse, and Ristorante Bartolotta to Milwaukee’s well-off grandparents and pre-prom diners broke ground with the intention to expand both geographically and demographically. In the coming months, “The Mayfair Collection” aims to bring all the quality and attention to detail we’ve come to expect from the overextended and homogenized regional restaurant behemoth to a mall-adjacent setting with four different places to fit almost any mall-goer’s taste.

Soon, consumers will be able to celebrate their Apple Store conquests with a latte and scone at a Parisian cafe. One can build a buzz after Build-A-Bear with a craft brew at the forthcoming pub or fall into “fast-casual” fare after falling into The Gap. Last week, the fourth and final piece of The Mayfair Collection also became the first of the quartet to open. Hinging on fresh ingredients and a chef-inspired takes on base indulgences like burgers, ribs, hot dogs, and custard served in a somewhat elevated setting, Osgood’s (11530 W. Burleigh St., 414-988-6044) opened its doors early last week. With an empty stomach, Milwaukee Record paid an early visit to the Wauwatosa’s Bartolotta-berth burger joint on our way to buying fake dog poo at nearby Spencer’s Gifts.

The space: Just off US-45 and near the new Pizza Man, Osgood’s is difficult to miss—even among all the other corporate-tested visual stimulus of glimmering signage and focus-group-approved logos—with its plain and hulking all-caps sign above the entrance. Even when discounting that it’s brand new, the black and white sign, along with the brick and wood facade conveys an altogether clean and classy aura…at least as classy as a business with something called “The Gobble Burger” on its menu can be.

The interior is something of a paradox. The menu is mounted to the wall, but many walls are constructed with fashionably-distressed slats of wood. Above the line of soft drink fountains and condiment dispensers hang faux-industrial lighting with black-painted palates taking the place of lamp shades. Unlike most its fast food brethren, Osgood’s has stained wooden tables, leather booths, seasonings in glass shakers on each table, and fake potted plants placed welcoming patrons passing through the vestibule. Like most of its fast food brethren, there’s top 40 music playing and ESPN mid-day fodder showing on the menagerie of flatscreens. There’s a labored industrial chic aesthetic within, but a fucking drive thru outside.

The service: Given the “fast-casual” nature of the business, our interaction with the staff was minimal. However, each Osgood’s employee we encountered managed to make a great impression in a small window of time. Sharon was quick to offer a boisterous and smiling greeting at the counter. The guy who brought our food to our table within five minutes of ordering gave it to us with a “Sorry, dude. They told us in training we had to set it down like it was a rare antique”-level of care. Between rushes, employees wiped down tables, swept, and restocked napkins and straws. We have no complaints. 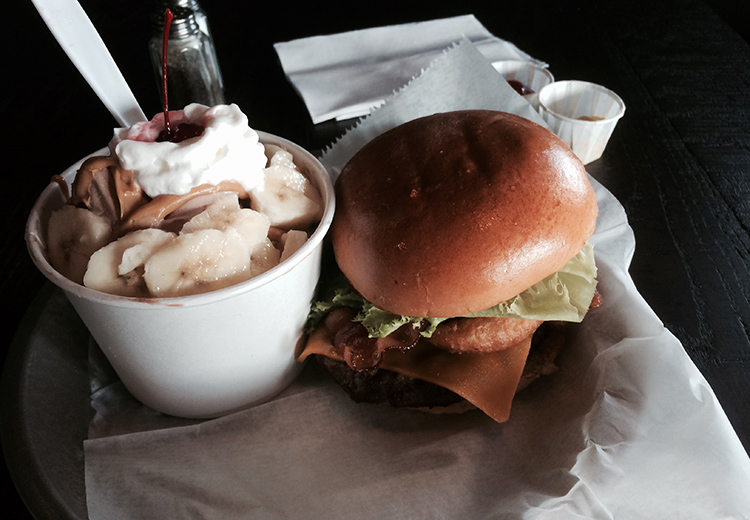 Milwaukee Record‘s food: While Osgood’s offers salads, ribs, beef sandwiches, fried fish, and hot dogs, early press and social media statements seemed to paint the business as a burger and custard purveyor more than anything else. Thus, we selected what seemed to be the most adventurous selections of its seven-burger, five-custard arsenal. The Holy Cow Burger ($6.95) combined a uniformly flattened medium-well broiled—we weren’t asked, putting another notch in the fast food column—beef patty with crispy bacon, a warm slice of cheddar cheese, tangy BBQ sauce, a tomato slice, lettuce, and a single golden-fried onion ring all flanked by a toasted and buttered brioche bun. Imagine a Culver’s burger gave a middle finger to burger society and just mated with another Culver’s burger then added $1.50 to the price to justify the taboo act.

For dessert, we bypassed the Banana Split, Hawaii 5.0 (custard banana split with pineapple) and the marshmallow-stuffed and berry-drizzled Strawberry, So Very in favor of the Hunka Hunka ($4.75). The modest swirl of impressively thick chocolate custard was accented with fresh banana slices and a savory peanut butter sauce. It was something Elvis would’ve been proud to die on the toilet beside. The salty, sweet, and fattening duo of beef, bacon, and peanut butter left us lethargic and satisfied, almost accounting for a fast food meal without fries or a drink that clocked in at $12.41.

The verdict: Beneath all the pomp and presentation, Osgood’s is pretty much just another burger place. It’s fine. If you’re near Mayfair mall and want a burger, this place makes them. More like “Osokay’s” if you ask us.