On the 20th anniversary of Chris Farley’s untimely death, it’s worthwhile to recall a formula someone once expressed for living a full day: laugh, cry, and think.

Chris Farley used his time on this Earth to deliver great bellyaching laughs of mammoth proportions that will endure forever. His drug overdose at the age of 33 remains a tragic loss that could very well move us to tears. And the void left behind by the dynamo from Madison still gives us cause to dwell on a simple question with a complex answer: Why?

But before we hazard a guess as to why he left us, we should celebrate how divinely, rambunctiously, painfully funny Chris Farley was. Because we were enriched by his gift for comedy, and whether he’s in Heaven making God giggle until he pees Himself, or just decomposing beneath a tombstone, we owe Chris a debt of gratitude. We adore him too much to deny him a simple “Thank you.” 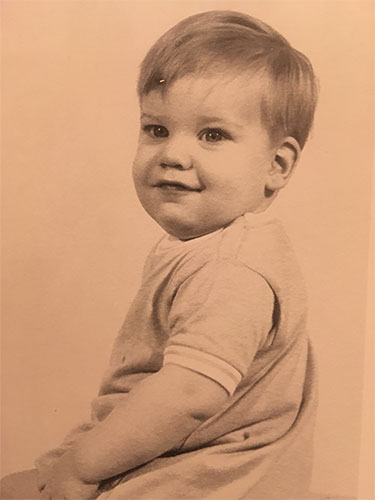 The third of five children in an Irish-Catholic home, Christopher Crosby Farley was born on February 15th, 1964, to parents Mary Anne and Tom. Mary Anne was a quiet, devoted mom in a house overrun with rowdy boys, while Tom was a boisterous extrovert who prospered as the head of the family’s asphalt business.

Tom Sr. was large in stature and heart. Father Farley and Chris shared a generous spirit, a drive to please people, and a deep religious faith, as well as volatile mood swings paired with urges to overindulge.

With little hyperbole, Chris made his comic talents known shortly after exiting his mother’s womb. According to his brother Tom Jr., “He lived to make others laugh, and he was fearless about it.”

As a boy, Chris had a teacher named Colonel McGivern who ended each lecture with a lame joke he coined the Groaner of the Day. Sensing an opportunity, Chris managed to sneak past McGivern and hide behind a curtain at the front of the classroom. At the exact moment the teacher delivered his corny punchline, Chris shoved his bare ass through the folds of the curtain to moon his classmates. The room exploded with laughter. McGivern scratched his head. “Jeez,” he said. “I didn’t think it was that funny.”

Young Chris treasured and studied every movie that starred cast members from the early years of Saturday Night Live. He also had a passion for sports, chiefly rugby and football. He was a pretty good athlete, and as any swooning Wisconsin girl will tell you, he was dazzlingly light on his feet. 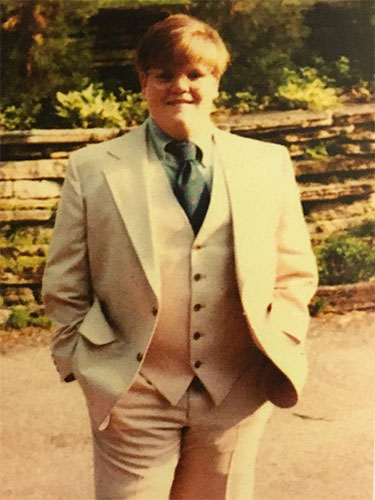 Just like his namesake in Tommy Boy, Chris enrolled at Marquette University, where he lived in a filthy house with his beer-chugging rugby buddies. His grades were lousy, and despite his talents, he was horribly self-conscious around the opposite sex. At parties, he tended to get nervous, drink too much, and do his “fatty falls down” routine in a mess of tragicomedy.

While he did graduate in 1986, it’s been said that Chris read only one book during his college years. It was Wired: The Short Life And Fast Times Of John Belushi. Chris didn’t see the biography of the SNL star who died of an overdose as a cautionary tale. His interpretation was that to become a comic icon, he needed to abuse drugs.

After college, the Tommy Boy parallels kept coming as Chris, the lovable misfit son, went to work for Tom Sr., the smooth-talking dad who ran the company. Before long, Chris left the steady but stifling job to pursue his dreams. Once focused and devoted, he was unstoppable.

From the Ark Improvisational Theater in Madison to the Improv Olympic in Chicago, Chris ascended to the mainstage of the Second City in 1989. That part of his journey only took about two years. Fast times, indeed.

Chris flourished in revues like The Gods Must Be Lazy. But even in a scene filled with heavy drinkers, the big man’s vices raised a lot of concerns. Offstage, his problems mounted. His apartment looked ravaged by a tornado of garbage. He was showing signs of OCD, tapping anything and everything twice, unexplainably licking his belt and shoelaces as he dressed himself. Chris was in pain…

On the other hand, he was just so goddamn funny. Even comedy tycoon Lorne Michaels thought so, and in the fall of 1990, the pride of Wisconsin flew to New York to join the cast of Saturday Night Live. 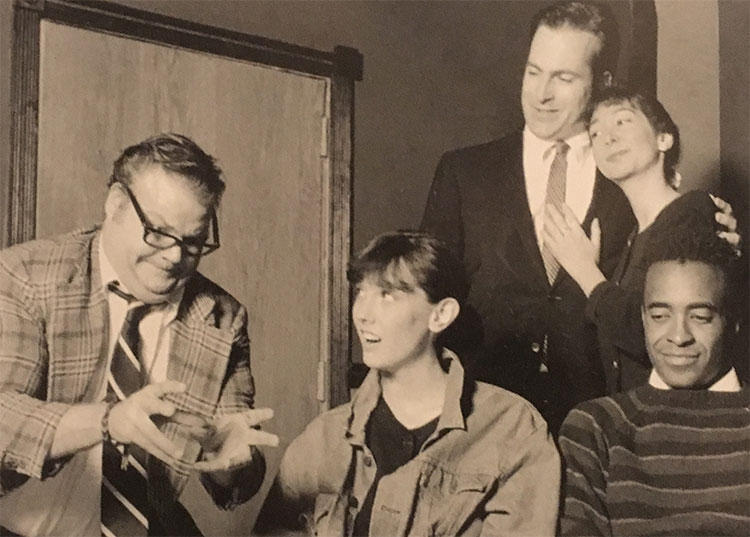 From his stellar, six-year run in the Big Apple, let’s break down three of Chris’ greatest skits (with apologies for omitting “Schmitts Gay”). The scenes reveal his commitment to breathing life into a character, his knack for physical comedy, and his endearing personality.

• The “Motivational Speaker” was written by the prolific Bob Odenkirk—and though the two have little in common, the character was named after Chris’ dear friend and spiritual guide, Father Matt Foley. With a magnetic stage presence, kooky body language, and an explosive roar, Chris became a legend. Viewers felt a constant giddy joy watching a downtrodden failure preach about the woes of “LIVING IN A VAN DOWN BY THE RIVER!” The Quotable Farley was born, and we remain grateful.

• The “Chippendale’s Audition” showcased Chris’ glorious, logic-defying agility. Hysterical as the bit was, it was also polarizing. Playing the part of underdog Barney in a dance-off against the hunky Patrick Swayze, the sketch concluded with Chris (politely) getting fat-shamed and rejected. Some of his friends feared that since Chris was so sensitive, the scene could have damaging effects on his psyche. The scene was a hit. And his friends were right.

• Lastly, we got to adore Chris in his true form: sweet, sincere, disarming, Midwestern polite, beautifully awkward, and in a childlike state of awe as he interviewed his heroes on “The Chris Farley Show.” On a darker note, we saw him resort to self-harm as he called himself “STUPID!” Chris once explained the appeal of acting dumb: “Nobody’s afraid of the fool.” The man was so bursting with empathy that he didn’t want anyone to feel afraid.

Chris entered rehab several times during his stint at SNL. It was not all in vain. He made a moving speech at Hazelden, a facility in Center City, Minnesota, in June of 1994, in which he declared to a roomful of addicts in need of hope that he’d been sober for over a year. In closing, he said, “I know I can do it. We all can do it.” Indeed, Chris really did it…for three years.

During the filming of Tommy Boy, Chris was sober, and the results are still a delight to watch. Bolstered by his chemistry with costar David Spade, the film did well in theaters and made a fortune on VHS sales. And do you recall the woman a randy Spade spied on as she stripped nude and dove into the hotel swimming pool? Her name was Lorri Bagley, and after months of friendship and courting, she became sober Chris Farley’s girlfriend.

Thanks to his springboard at SNL, Chris emerged as a movie star. The Quotable Farley still brings instant bliss in his roles such as the angry bus driver in 1995’s Billy Madison. (“Him and her GOT-IT-ON!”) And though it was a mere rehash of Tommy Boy, the following year’s Black Sheep has its moments. (“That’s one small step for man, one giant…I HAVE A DREAM!”) For his swan song, he played a crass slob in Dirty Work. (In that one, he said some mean things about a prostitute from Vietnam.)

Living with a disease got crass, dirty, and mean for poor Chris towards the end. When he relapsed, his girlfriend was devastated, and she wasn’t alone. Before Lorri broke up with him, he cried and drank vodka all night and kept pleading with her, “How do I turn off the voices in my head?!”

As his descent got deeper, Chris hung out with drug dealers, users, and prostitutes. When he returned to host SNL in October of 1997, he was in a horrid state, and he wasn’t fooling anybody. He also wasn’t listening to the family and friends who insisted he go to treatment for what would have been the 18th time.

At the end of a nihilistic drug bender in Chicago on December 18, 1997, Chris overdosed on cocaine and morphine. Before she left him alone in his apartment, a woman he had paid to keep him company heard his last words: “Please don’t leave me.” Chris echoed the final statement of his idol John Belushi: “Just don’t leave me alone.”

Even the brilliant clowns need somebody to love.

I love Chris Farley. And even if I’m not sure there’s a destination after death called Heaven, he made me want to believe. When stranded far from the shore alone in a sailboat, I’d be one to pray to Saint Chris: “Need a little wind here.” Two decades later, he still makes me want to believe there’s a place to reach on the shore full of everlasting love to call home.

In his own words: “The notion of love is something that would be a wonderful thing. I don’t think I’ve ever experienced it, other than the love of my family. At this point it’s something beyond my grasp. But I can imagine it, and longing for it makes me sad.”

We miss you, Chris.