It’s going to be hard to say goodbye to summer, but at least about 200 of us will be able to do so in one of the best ways imaginable. Last month, we were proud to announce that we convinced Avalon Theater in Bay View to let us screen 2001 cult classic comedy Wet Hot American Summer on September 22, the last night of summer. Since then, tickets have been selling like crazy. At this point, only 30 are left. In the weeks since announcing the screening, we’ve also partnered with two Wisconsin breweries, Avalon’s kitchen staff, and a nearby bar to make sure this is the perfect end to yet another enjoyable summer in Milwaukee.

Make sure to show up to the theater a couple hours before the movie, as Bay View’s newest, smallest, and (for our money) best brewery will have one of its small batch beers on tap in Avalon’s bar. Enjoy $4 pints of A Priori Pale Ale from Enlightened Brewing Company and watch era-specific movies at the bar as you anxiously await Wet Hot’s start. If any Enlightened lasts until the movie’s 9:30 start time, it can also be purchased from the bar during the movie. And so you don’t fill up on Enlightened alone, Avalon created a $6 “Camp Firewood Feast” that includes a hot dog, a gigantic s’more, and a juice packet. The s’more looks like this: 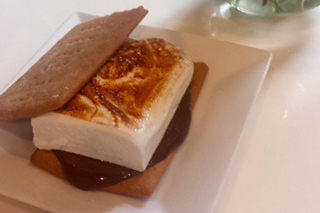 Finally, our friends at Ale Asylum and Burnhearts have joined forces to keep the fun going long after the credits roll with a Wet Hot American Afterparty, that runs from 11 p.m. (a little before the movie ends, for those of you who foolishly waited too long to buy a movie ticket) until close. DJ Andy Menchal will spin hits and deep cuts from the ’70s and ’80s. Cans of Ale Asylum will be $3 all night and Bedlam! IPA—which Deadspin called one of the best beers 2014 AND its favorite Wisconsin beer—will be available on tap for special event pricing.

Let’s end summer laughing, drunk, and in the company of people with great taste in movies. Now if you’ll excuse us, we’re going to go fondle our sweaters.