Finally, Milwaukee made its long-awaited debut on the national stage. This is what we’ve waited years to prove: that Milwaukee can host an event of national significance. Even better, it was supposed to be the largest political bacchanal of the election cycle (we’ve already known that we can handle large parties for years, just see Water Street on any given non-COVID weekend). This was our chance to show the country some of the best things this city has to offer. 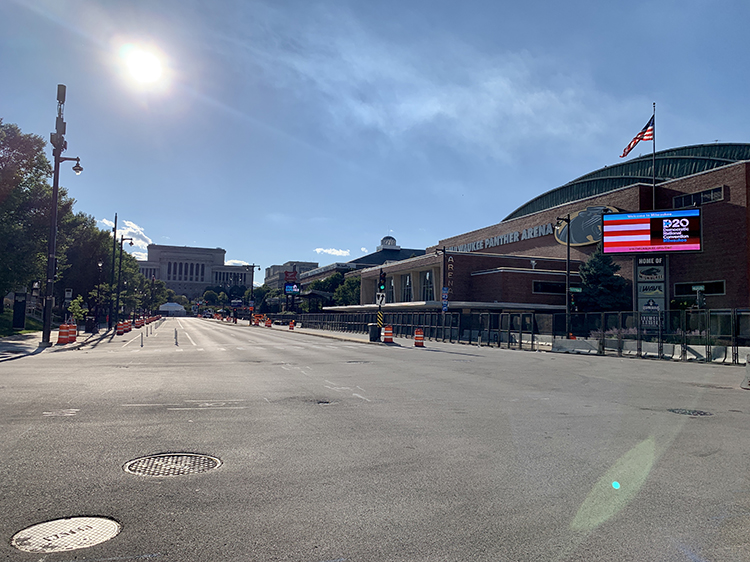 With almost every event around the country being cancelled (or drastically changed) through at least the rest of the year, we expected that this week was going to be very similar to those that came before. For sure, it wasn’t going to be the city-closing event we once anticipated it would be. We once thought we needed the DNC to share our city with the rest of the country, to invite them to experience it for themselves. We are rightfully concerned that the opportunity is now lost, and that we can’t wait around another four years to get another chance.

But, after watching the events unfold virtually over the past four days, I came to the realization that the DNC needed Milwaukee just as much as we needed them. Democratic leadership needed us as a cipher for the problems we all face, not in a slick preprogrammed video, but as seen from street level.

On a normal year, the host city would have the opportunity to share the amazing work that local business owners, nonprofit leaders, and civil rights activists have done for the city. These would be upheld as examples of what the party’s policies could hope to achieve as they build their platform. The nation would have the chance to see Milwaukee in a positive light. Elected representatives from around the country would leave with a better understanding of this Midwest metaphor (and quite possibly a literal hangover).

However, as I tuned into ABC’s coverage of the DNC’s first night we were treated not to imagery of Milwaukee, but a familiar “Live from New York.” I expected this from the new, virtual format. With everything hosted remotely from the most convenient location (for the network), of course that means New York will get to be the host by default. At least I would be treated to highly produced shots of my city, some gorgeous tracking shots over the lake at sunset perhaps?

But then the event continued. Every bumper showed iconic Empire State architecture, every host in front of sleek shots of the New York City skyline. Even Oshkosh got more camera time than the ostensible host city, as the only “man-on-the-street” footage occurred there. Lake Winnebago is nice, but it’s not Lake Michigan.

In fact, if it wasn’t for Representative Gwen Moore’s great speech in front of a poster with the Northwestern Mutual Tower on it, this city wouldn’t have been represented at all.

Is it any wonder why Milwaukeeans have a chip on their shoulder?

We love our self-deprecating humor (it comes naturally when you maintain a friendly rivalry with a city that just realized it exists) but it’s hard not to see COVID as playing an especially dark joke on this city on top of the disaster it has already wrought. Obviously, it’s been a tough year for everyone, and we understand the importance of staying safe, but as Matt Wild has previously stated: it’s starting to feel personal.

Before everything shut down in March, this city was buzzing with an energy I haven’t seen in a long time. This was supposed to be “our year,” the year that Milwaukee presented itself to the nation as more than just beer, cheese, and evictions. The Bucks were favorites to win the NBA Championship, bringing home court advantage to our new arena. The Brewers’ chances in returning to the Fall Classic were as good as they’ve ever been (also recognized by the publishers of the RBI Baseball video game series, who put MVP Christian Yelich on the cover). The DNC…well, let’s not open that wound just yet.

The Bucks may still come roaring back for a national title. The Brewers may still have a crack at the pennant (obligatory 2020 asterisks included). But there will be no parades on Wisconsin Avenue if they do. We had a promising summer in the spotlight which, as of Thursday’s DNC wrap-up, is now behind us without really happening at all.

During the run-up to all of the major events we were planning on hosting, it felt as if our city had been in national headlines more this year than in the past decade. But for all of the scrutiny, we’ve received none of the celebration or the vindication.

The national media has not done Milwaukee any favors, but over the course of the pandemic, The New York Times has turned its critical lens on itself, publishing several stories about young professionals questioning their choice of residence, all asking “when everything that differentiated your city is forced to close, would you still live there?” There had already been a demographic shift taking place across the country, but COVID may have accelerated it. Driven by personal or financial (and now health) reasons, people have been leaving America’s largest population centers for nearby states. Some mid-size cities don’t require much attention to attract these urban undecideds. Austin and Denver have been ascendant for years, but now cities like Boise are making headlines for attracting tech workers from California (even though they may not have asked for it). Other peers have had to get more creative to attract new citizens: Tulsa, Topeka, and others are poaching whomever they can through financial incentives. Due to the work-from-home revolution, many of these people may make their change of address permanent. If these stories prove to be prescient, this shift may occur even faster

All the events of the last several months has forced me to reflect on my own city. What would I say if someone asked me why I choose to live in Milwaukee?

Live here long enough, and some of the city’s rich history rubs off on you. This is where Teddy Roosevelt made his Bull Moose speech after surviving his would-be assassination! This is the largest American city to elect a socialist mayor (as well as the most recent one)! This is where the American League was founded (you’re welcome, Yankees fans)! And, obviously, we’re the city that beer made famous. But history is no indication of the future. All this was well before “Superstar Cities” became the singularities of investment and population they are today, which casts our current predicament into even sharper relief.

Was this our one shot at reclaiming some national significance? Is Milwaukee… over?

After some soul-searching, my answer is no. I, for one, can’t think of another place in which I’d rather be quarantined.

While it may not be readily apparent to outsiders, there’s a lot of love for this city from its citizens. While others read headlines, we see the real city with everything that entails. Its cultural attractions (not just the Fonz), its culinary perspective (not just beer and cheese), and its problems (even if they are at times seemingly intractable). We love this city, and it’s a city where the feeling is mutual.

We love that we have major league teams with such a dedicated fan base (and especially that they are doing so well). We love the world-class concerts at the Fiserv Forum and Pabst on down to local venues like Cactus Club and X-Ray that punch well above their weight in the national acts they host. We love the direct flights across the country we can take (with far less hassle than other, larger airports). We love the world-class parks system, which the community has rediscovered as a place to do more than play Pokemon during social distancing (a system which is, as far as I know, the only one where you are encouraged to drink beer and play cornhole). We love the fact that we can reach all of these by well-maintained, well-connected bike trails and one of the most efficient transit systems of any comparably-sized American city (twice recognized by the APTA as best in the country).

And, of course, we love complaining that we aren’t taken seriously by the rest of the country.

But most importantly, the people who build something here are the most passionate people I’ve ever met. Perhaps it’s our Midwest humility (or maybe it’s that inferiority complex which we keep being told we have), but it seems people, both locals and visitors, are always astonished at the breadth and quality of amenities we have here. As if we don’t deserve it. As if we’re too small, too provincial. But we do, and we work very hard to make it happen. This city is the work of hundreds of thousands of dedicated and visionary people who all do their part to make Milwaukee better.

Due to the pandemic, they are in major trouble.

We need to save our stages (and all other local institutions) now more than ever, and it will be more difficult without the financial support of these major events. But we can’t wait another four years for someone to deign our city worthy, we have to keep proving it ourselves.

Milwaukeeans are resilient. We vociferously support our local businesses, art galleries, concert venues, and each other, collectively making up the “coolest, most underrated city” in the Midwest. After the pandemic is past, we need to find our own ways to show the country what they missed this past week. Let them know that they shouldn’t wait for another national event to find an excuse to visit. That they should come have a beer with a local, ask us why we choose this as our city to call home. Each time they’ll get a new answer different from the last, because we’re all hustling in our own way to make this the city we want it to be.

And we must keep doing it, with or without the spotlight.