For all of photography’s triumphs in capturing a moment in time, the medium is surprisingly ill suited to capturing a moment over time. A moment is just that, and although plenty of exceptions abound—think time-lapse photography or Apple’s moving “Live Photos”—photography tends to isolate its subject to a particular instant and leave the surrounding flow of time to the imagination. In many ways, that’s the medium’s power, but it can also be seen as a glaring limitation.

Enter Milwaukee photographer Tom Bamberger and a looming suburban landfill. In a show entitled “Civil Twilight” opening this Friday at The Green Gallery East, viewers are invited to take in Bamberger’s massive, 36-foot-long photograph of an Oak Creek landfill and ponder the questions of time, space, form, and perception. Surprisingly, trash is one of the last things the piece invokes.

The untitled photograph is impressive in its own right, nearly taking up the gallery’s entire 39-foot wall, but the process in which it was made is just as fascinating. Using a hi-res panoramic device known as a GigaPan, Bamberger slowly photographed the landfill from right to left over the course of 45 minutes. The result is a piece that overcomes photography’s limitations by subtly tracking the change of light over time. Impressive, too, is the photo’s seamlessness. Unlike, say, an iPhone’s “panorama” setting, which often captures (occasionally fascinating) digital fuck-ups, Bamberger’s photo never appears to be patched or stitched together—a credit both to the technology and the artist’s careful planning.

Beyond the technical specs (the digital file weighed in at a hefty 10 GB), there’s plenty to enjoy in the image itself. A close inspection reveals an astonishing amount of detail: birds perched on a power line, individual blades of grass, intricacies in a chain link fence. Multiple lines run across the photo, too, which, when combined with its imposing size, transform the simple act of viewing into a physical activity.

The show takes its title from the time during which the photo was captured, roughly equal to photography’s much-sought-after “Golden Hour.” Fittingly, Friday’s reception is scheduled to begin at the same time: 4:42 p.m. (The exhibition runs through February 6.) A closer look at the photo can be found here, though tackling it head on and in person—and spending your own time with the piece—is highly recommended. 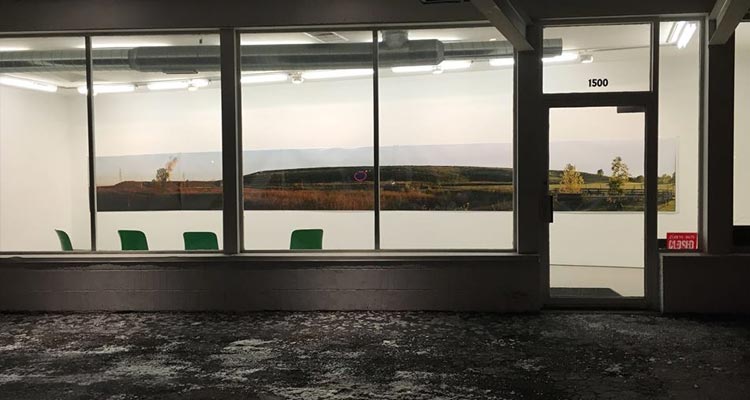