As if fans of the Milwaukee Brewers needed any more reason to feel the magic of this postseason run, consider that the team has a fan who has never seen them lose. Born Sunday, September 23 at 9:07 a.m. with a stat line of 6 lbs, 12 oz and a length of 19 inches noted on the back of his rookie card, Milo Derek McNinch’s birth has coincided with the team’s sensational 11-game winning streak. During this streak, the Brewers have earned the best record in the National League, won the Central Division, knocked out the Colorado Rockies in the NLDS, and now face the Dodgers with a chance of advancing to the World Series.

Before the NLCS begins tonight, Milwaukee Record spoke to Seth and Lindsey McNinch, a couple of Brewers fanatics from West Allis, and the proud parents of Milo, the undefeated baby. Let’s get the scoop on this wonder boy from mom and dad.

Milwaukee Record: On day one of the winning streak, what will you always remember about your son’s birthday?

McNinch parents: We remember how long it took for him to come into this world, as mommy was induced two days prior, but little man wasn’t ready to come. The day he was born was the day the Brewers crushed the Pirates in the afternoon. My dad, Tom, a diehard Brewers fan, always said “make sure you go into labor a day the Brewers aren’t playing.” Well, it didn’t work out. After a C-section with Milo, we had many visitors and people eager to meet him, but right away, we introduced him to the Brewers. Milo laid underneath the TV and was constantly listening and watching. We knew he would love the team as much as we do.

MR: For Lindsey in particular, what do the Brewers mean to your family, and how does it feel to know that Milo is now a part of the tradition?

Lindsey McNinch: It goes back years ago to my dad’s grandparents, who started taking my dad to Milwaukee Braves games when he was young. Then, when they became the Brewers, my dad continued the tradition with us kids when we were young. He’s bought season tickets for many years and we all take turns going. It’s a bonding experience. My dad can’t wait to bring the new addition, Milo, to many games, and he’s already asking when he can take him to the “Sanctuary,” which is what he calls Miller Park.

This year is also extremely special to me because in 1982, the Brewers went to the World Series. This was the same year and month my brother Derek was born, so my dad spent many days leading up to his birth, and after, watching these games and introducing them to my brother. Now, I’m doing the same with my son, who shares his middle name with my brother. Milo Derek was named after him because my brother passed away and we wanted to remember him in this special way. Every year on Derek’s birthday, my family goes to a game together. My mom, stepdad, dad, sisters, myself, and our spouses celebrate his day doing what we’ve always done as a family.

MR: Instead of “mama” or “dada,” are you concerned the boy’s first words might be “Christian Yelich”?

McNinch parents: Oh, Milo might be yelling out “Yelich,” “Moose,” or “Lo Cain.”

MR: Lindsey, has the boy had a chance to marvel at your huge collection of bobbleheads?

LM: Milo has been by the shrine several times. Even though his newborn eyesight doesn’t allow him to really see it, he can still sense its greatness.

MR: Seth, say Milo grows up and loves the Brewers, yet he doesn’t hate the Cubs. Will you sit him down and stress the importance of trashing the team?

Seth McNinch: Of course that tradition will live on. It’s like the Cubs are from Shelbyville and the Brewers are from Springfield. You can keep your turnip tree and we will have our sweet lemonade. Or Robinade. It’s a real thing. Look it up. 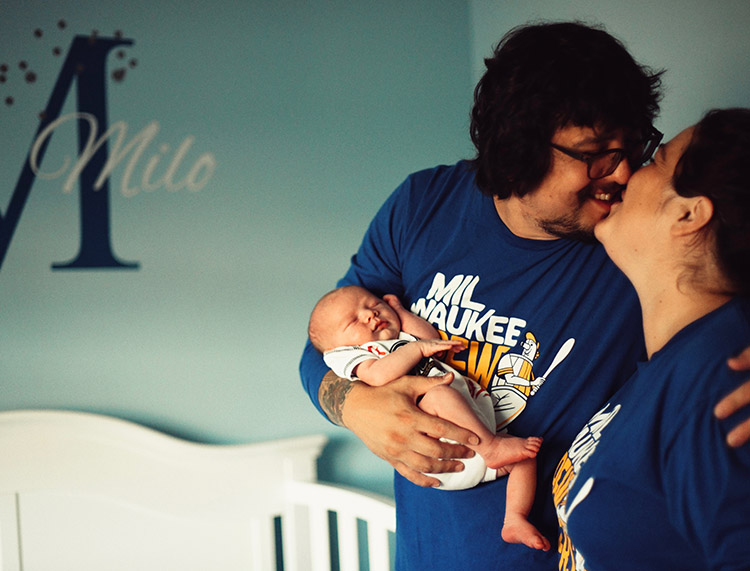