Down in Racine, there’s a portal to another era. Its clashing tile facade is cracked and faded, exhibiting decades of wear and tear. Affixed to a side of the weathered structure, a sign faces out to passersby on a bustling downtown street, just as it has for close to 100 years.

The plain text displayed both above and below a painted silhouette of a butt-naked baby doll that’s encased a sun-washed blue circle simply reads “Kewpee Hamburgers.” Below that sign, plastered beside the entrance, a far more modern piece of signage bluntly instructs potential customers to “STEP UP.” Each and every day, throngs of loyal locals and voracious visitors alike do just that. They line up for their turn in this tastiest of time machines.

While this worn location suggests a much longer occupation, Kewpee Lunch has only been a tenant at its current 520 W. Wisconsin Avenue location since the late ’90s. However, Kewpee Hamburgers has held a consistent presence in downtown Racine in some way, shape or form since 1926. 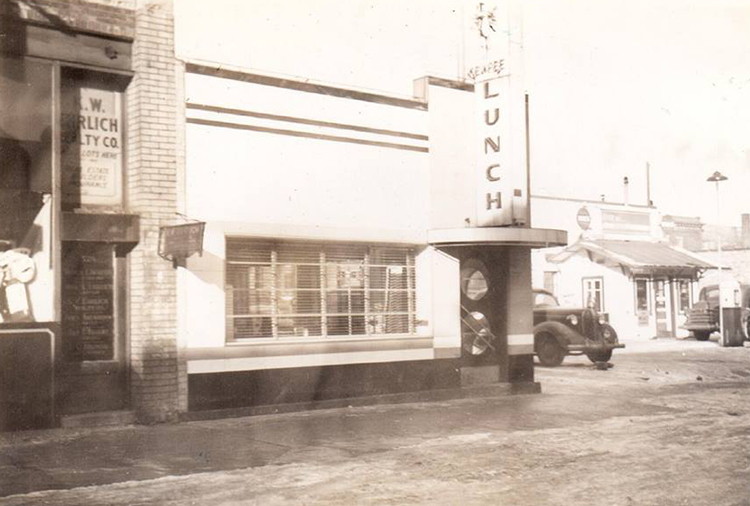 In 1923, the first Kewpee Hamburgers—then known as Kewpee Hotel Hamburgs—opened in Flint, Michigan. Taking its name from a popular line of “Kewpie” dolls that was inspired by a Rose O’Neill comic strip that was first published in 1909, Kewpee is second oldest burger chain in the world, hitting the market just two years after White Castle’s 1921 start. Though Kewpee Hamburgers wasn’t first of its kind, it predates McDonald’s by exactly one quarter-century, and Wendy’s founder Dave Thomas credited the Michigan-born chain as a direct inspiration for his square-patty burger empire.

Racine got its first Kewpee Hamburgers just three years after the franchise’s start. In the years that followed, the chain expanded in kind with the rising popularity of the hamburger in America. At its height—narrowly before the beginning of World War II—there were more than 400 burger joints bearing some form of the Kewpee namesake. Today, there’s just five left. Some were done in as a result of legal disputes about trademarks and royalties, which forced some locations to change their name and led to the closure of others. Of course, rampant expansion of McDonald’s and the rise of various other chains surely played a hand in putting many Kewpees under as well. Still, in the midst of decades worth of change and growing competition in an ever-shifting culinary landscape, Racine’s little Kewpee Lunch continues to stand strong and prosper in disheveled opposition of time itself. 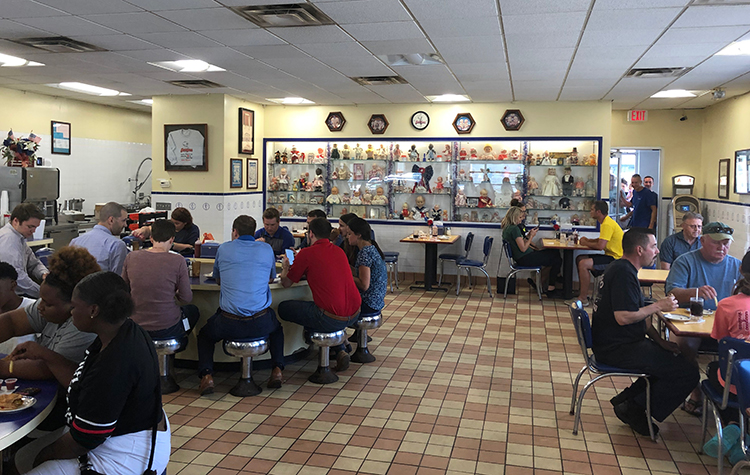 Earlier this week, we took a nice summer drive down Highway 32 to see if we could figure out exactly why Kewpee Burger has continued to thrive. After careful examination and tireless personal research, we feel we have an answer: It’s really, really good. As instructed, we stepped up—through the restaurant’s vestibule and straight into the past—and took our place in the to-go order line during the throes of Kewpee’s daily lunch rush.

We immediately took note of the pink- and white-tiled flooring that respectfully nodded to another generation. Bolder customers who opted to dine in waited for their place in one of Kewpee Lunch’s two semi-circular communal diner counters or at one of six traditional tables. Along the entirety of the restaurant’s south-facing wall, employees knocked out and endless line of tickets by systematically grilling up burgers on a flat top, topping buns at a neighboring station, blending malts and shakes when needed, and dropping fries into hot oil. 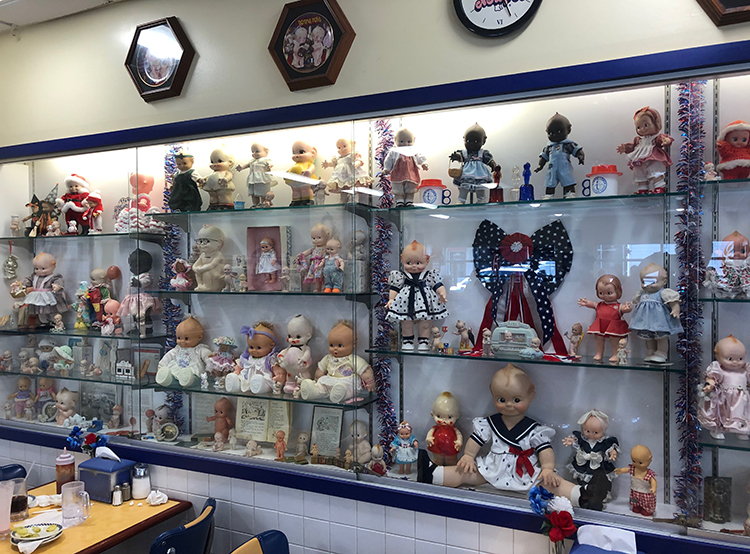 Interior decorations honor the Kewpie comic and toy, with antique dolls and figurines, branded games and accessories, Kewpie clocks and other memorabilia, and framed vintage strips and advertisements prominently featured in a case and screwed to the walls. Some of the restaurant’s tiles also show the once-prosperous chain’s unmistakable Kewpie doll logo. 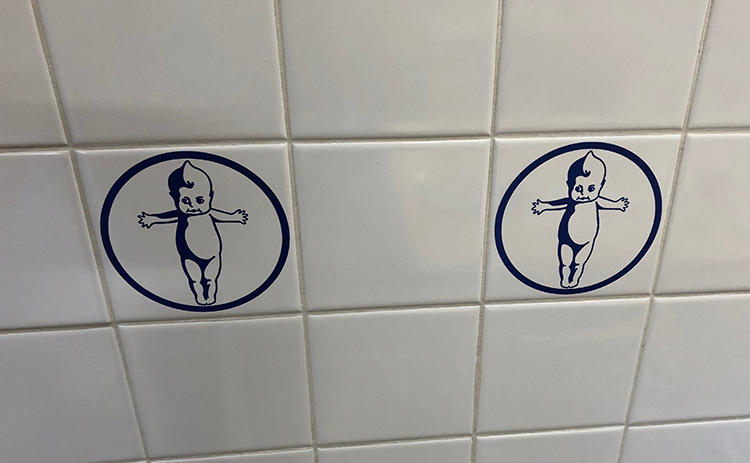 Through the years, not much has changed at Racine’s Kewpee. That consistency even extends to the ownership. Ever since Allen Spec took over for longtime franchisee Walter Block (owner since 1930) in 1957, Kewpee Lunch has remained a family business. When Spec died in 1963, his wife Emily Durkee asked her brother Richard Kristopeit to manage the restaurant. In 1976, Kristopeit handed the keys to his sons, Richard Jr. and Dave. Dave eventually sold his shares to his brother, who owned it until 1992. That year, Richard Jr. sold Kewpee to his sister and brother in law, Mary and Richard Buehrens, who own and operate it to this day. During our visit last week, or food order was brought to us by the couple’s son, Andrew. The generations of family affiliation not only keeps things consistent, it helps keep Kewpee’s quality high. 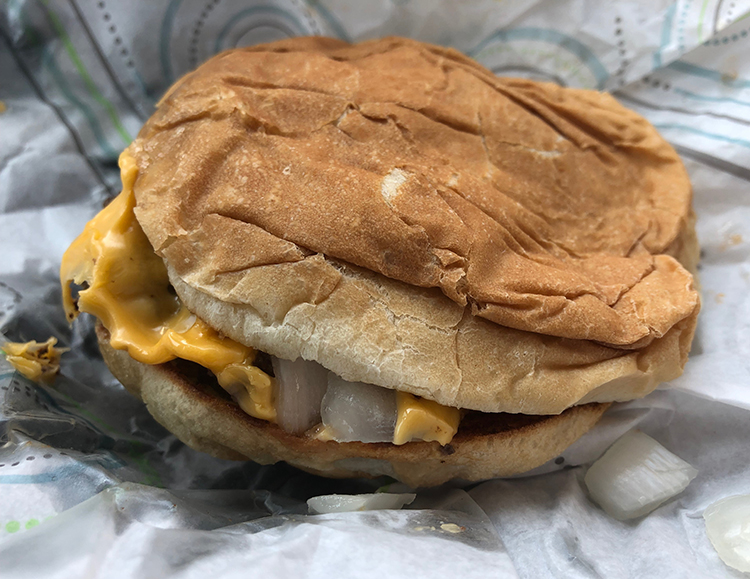 It appears the menu also hasn’t changed much through the years. You can get hamburgers and cheeseburgers (available in both single and double variations), a fish sandwich, a chicken sandwich, a toasted cheese sandwich, fries, chips, malts, shakes, sundaes, and root beer floats. Beyond a select few other menu items—gum, Lifesavers, soft drinks, and a select few breakfast items—that’s pretty much it. The most expensive menu item, the double cheeseburger, will set you back a whopping $3.55. Almost everything else lands between $1.75 and $2.50. Oh, and in case you hadn’t already assumed this was the case, Kewpee Lunch is cash only. 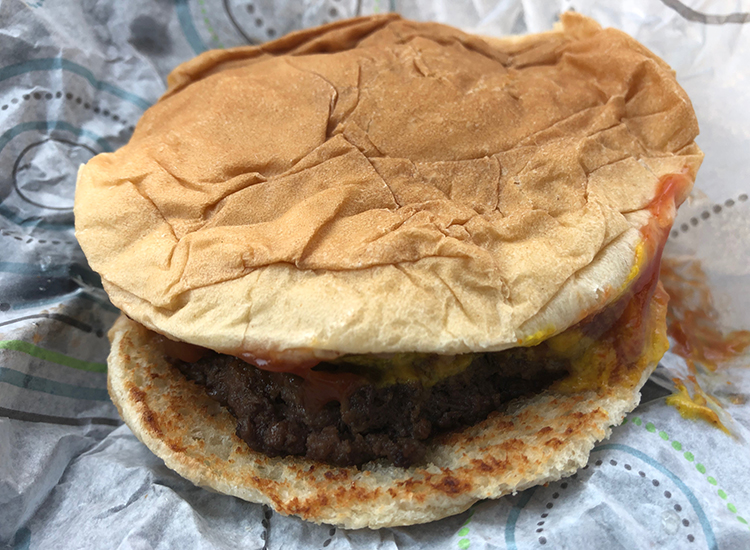 With our $11 order, we were able to put a pretty big dent in the menu. The aforementioned double cheeseburger (pictured a paragraph up), featured a pair of juicy square-ish patties, a literal handful of thin-sliced pickles, ketchup, yellow mustard, melted American cheese, and a liberal smattering of large diced raw onions pressed between two thin pieces of thin, toasted and flour-dusted bun. The standard Kewpee burger (pictured above, $1.80 price) offered the same great flavors—minus the cheese and the second ground beef patty. The fries were the same simple, lightly-salted, and crispy crinkle-cut variation you’ve surely seen many other places before, but the $2 tray did the job just fine. The savory side was rendered even more satisfying when chased with a sip of root beer float ($3.10) that was full of creamy vanilla ice cream and Kewpee’s allegedly homemade root beer.

All told, it was a simple and admittedly quite messy take on burgers, french fries, and a float. Still, its price, its portioning, its setting, and most importantly, its execution made this standard meal into a timeless American treat. Over the course of nearly one century, Kewpee had a handful of slogans, including gems like “Mity Nice Hamburger” and “Your Granpappy Ate Here.” And while we have our doubts about former tagline “Hamburg Pickle On Top! Makes Your Heart Go Flippity Flop!” making a comeback, the other statements still hold true to many of the folks who still step up to a counter downtown Racine each and every day for a taste of the 1920s. Perhaps their “granpappy” enjoyed the same lunch long ago. The “we cater to all folks” slogan appeared wholly accurate when we were there. And yes, Kewpee continues to make a “Mity Nice Hamburger.” 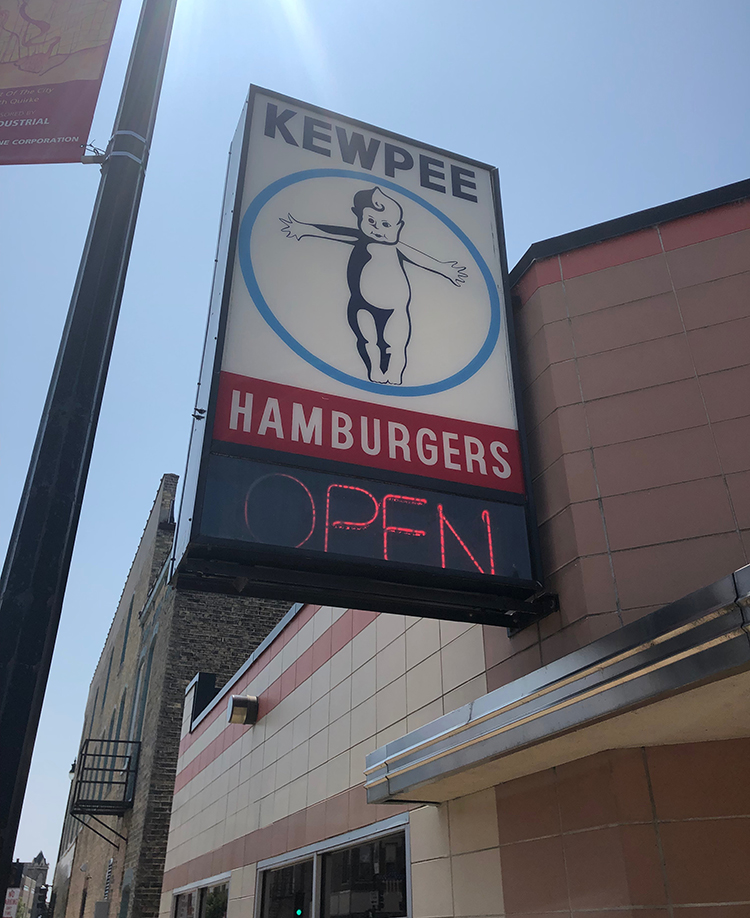