With New Year’s Eve on the horizon, the probability of there being at least one more holiday gathering on your itinerary, and the likelihood of occasional dinner parties thereafter, you’re bound to find yourself standing in the wine aisle of your local grocer or liquor store at some point in the near future. Between all the styles, the clever names, the flashy labels, and the often-intimidating aspects of wine culture, it can be tough to pick out the proper bottle (or box). It’s even more difficult if you’re broke.

Fortunately, like the always-trusty beers like High Life and Pabst Blue Ribbon or dirt cheap dining delicacies hidden throughout the city, it’s possible to find a worthwhile wine without breaking the bank. Just ask Katie Espinosa. The Notre Dame graduate has been working with The Bartolotta Restaurants since 2002. She started as a server, and has since held job titles like Manager, General Manager, and Wine Director at a number of the group’s affiliate restaurants. In 2008, she became a certified sommelier—of which there are fewer than 10 in Milwaukee—through the Court Of Master Sommeliers, and added the Specialist Of Wine certification through Society Of Wine Educators thereafter.

“I love finding wines that are great and under $10,” Espinosa says. “I have the luxury of trying lots of wine all the time, but I’m more excited when I try a really great $10 bottle.”

To see which bargain basement wines (and wine-like products) make the grade, we bought eight items each priced under $7 and met the certified sommelier at The Rumpus Room to taste a range of affordable imbibements and give her thoughts on which is worth your hard-earned money. 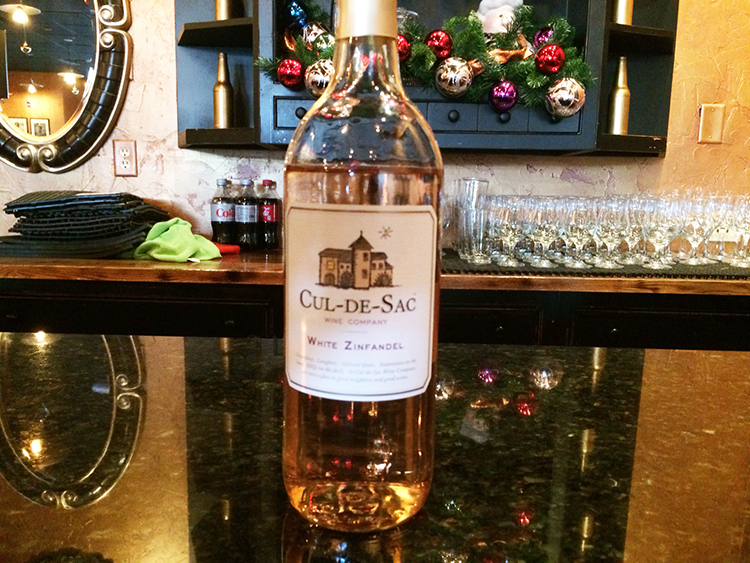 Flavor profile: “They’d call it “off-dry” or “semi-sweet.” From dry to dessert wine sweet, this is probably 70 percent to that 100 percent spectrum of really sweet. Honestly, it’s been a long time since I’ve had white zinfandel, and this is surprisingly balanced. It’s not grossly sticky-sweet. If someone wanted a sweet wine and they only wanted to spend $5, I don’t think they would be overly disappointed in this. For spending under $5 on this, you made a good choice.”

Suggested food or event pairing: “Strawberry shortcake. Fruit Loops. I would pair this with just about anything I would’ve eaten in college.” 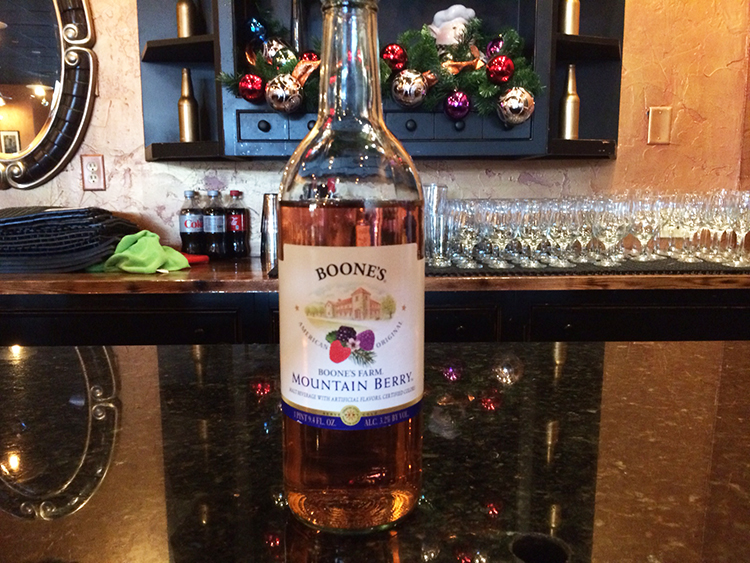 Aroma: “Right away, this is sticky-sweet on the nose. It smells like blue raspberry Jolly Ranchers. It’s kind of like a gas station slushy on the nose…or cotton candy.”

Flavor profile: “It tastes more like soda than alcohol. It tastes kind of like a summer day or a dessert, like a Hawaiian ice. To me, it tastes a little bit like some of those pre-mixed cocktails you can buy at State Fair or at Summerfest. You’re going to need to want something kind of sweeter.”

Suggested food or event pairing: “Actually, it probably wouldn’t be half bad with barbecue.” 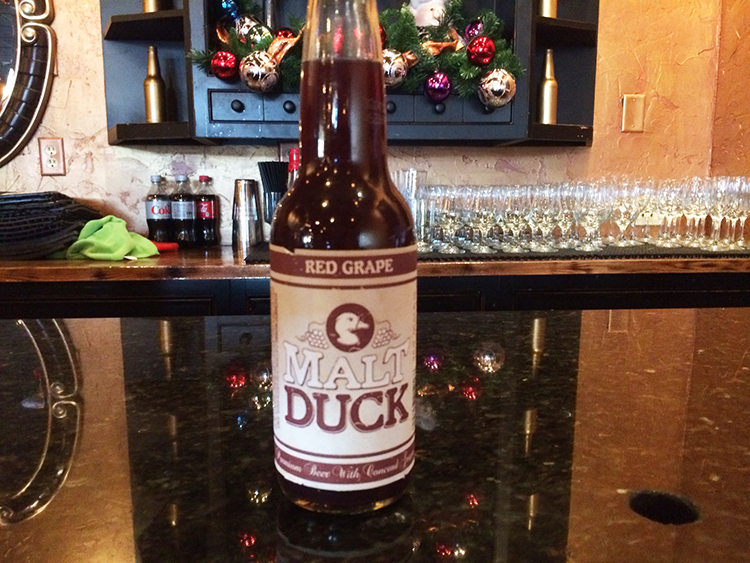 Flavor profile: “It starts sweeter when you taste it and then the malt texture and flavor kind of comes through at the end. It does pull off a dryness, which is going to make it easier to drink over more than just a sip. It’s slightly effervescent, it’s slightly sweet, but has a slightly dry flavor.”

Suggested food or event pairing: “I could see this doing really well at ball games, actually. It’s kind of fun. It’s easy to drink. I don’t think it’s meant to be super serious. If you like it, which I think people would, it’s going to be one of those things where you can eat whatever you like and it’ll be fine with it. I don’t think it’s going to be a disaster. You aren’t going to eat it with something super fancy anyway.” 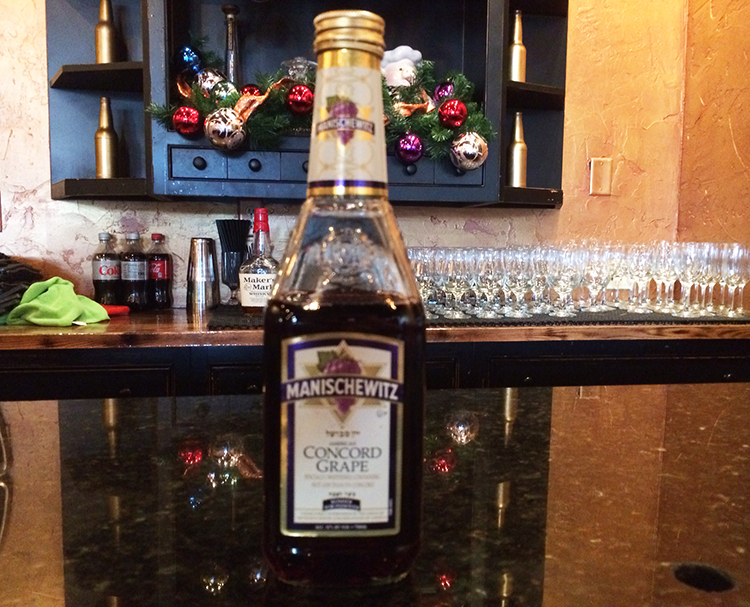 Aroma: “It’s much more perfume-y. It’s both fruity and floral. This kind of has [the scent of] violets.”

Flavor profile: “It’s sweet. If I had to guess, I would say this is fortified grape juice, based on the way it tastes. Although, it’s concord grapes, so it could be fermented, but I’ve never had fermented concords”. (Editor’s note: It is fermented.)

Suggested food or event pairing: “I think a lot of this is probably for tradition. So whatever would go with a Seder meal. How about lamb? Other foods that sweet things can go well with sometimes are fatty items. Maybe something like duck with cranberry sauce.” 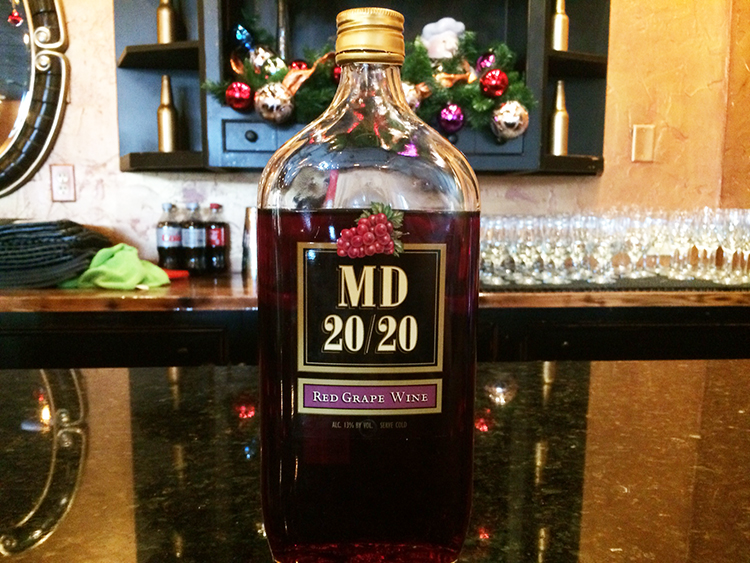 Flavor profile: “I don’t know, I don’t want to say anything’s not worth the $4. It might not be something I would personally buy, but it clearly has a market. They still make it. People buy it. I personally would’ve rather gone with the Boone’s Farm or the Malt Duck.”

Suggested food or event pairing: “I think part of why some of these are sweet is because they’re not necessarily meant to go with food.” 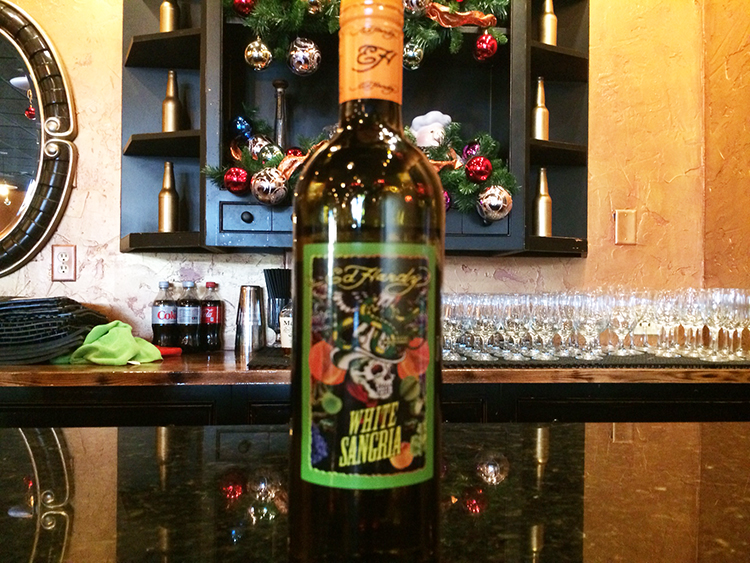 Aroma: “This one, to me, smells a little bit like limes.”

Flavor profile: “This is kind of the all-in package. It’s something that’s already pre-made. People already know what sangria is. Some people already know what Ed Hardy is. This doesn’t taste anything like it smells. It’s also kind of sweet. Sangria is served over ice a lot. Having this extra cold would be beneficial.”

Suggested food or event pairing: “I worked at a place that had a dockside restaurant, and they served a lot of this—both red and white. My memory of this is people coming in on their boats, cheese curds, and fish fry in a basket. That kind of stuff.” 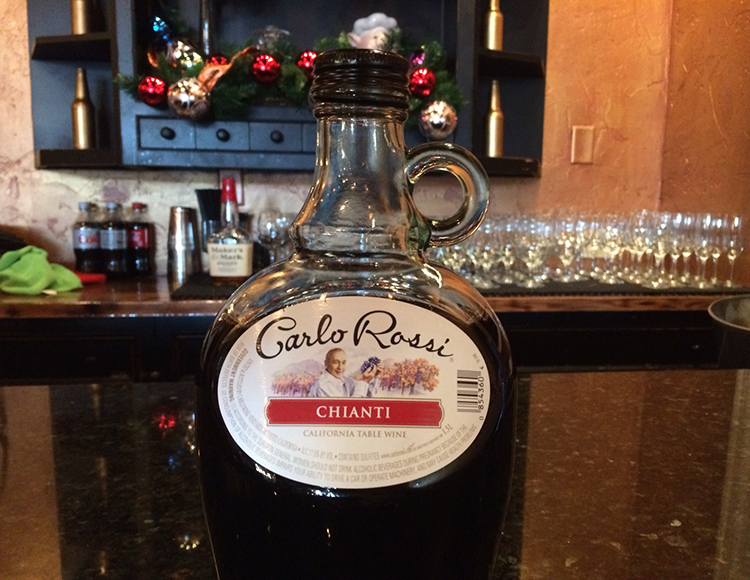 Flavor profile: “It has a slight…almost cherry cola or Dr. Pepper sweetness to it, but it’s mostly dry. Because of the grapes that are used, it’s going to be the most recognizable as wine. I like that it’s slightly chilled. I think that helps keep it all together.”

Suggested food or event pairing: “You know, because it’s dryer, it could go with a more traditional-type meal. I think you could go anywhere to something with a pasta sauce—a red sauce—or you could do chicken, a burger, a steak, that kind of thing.

“I think if you were to do a party where everyone brought an inexpensive bottle and you gave a pretty low limit, like maybe $8, I don’t think this would be a bad pick. I think it would show pretty well.” 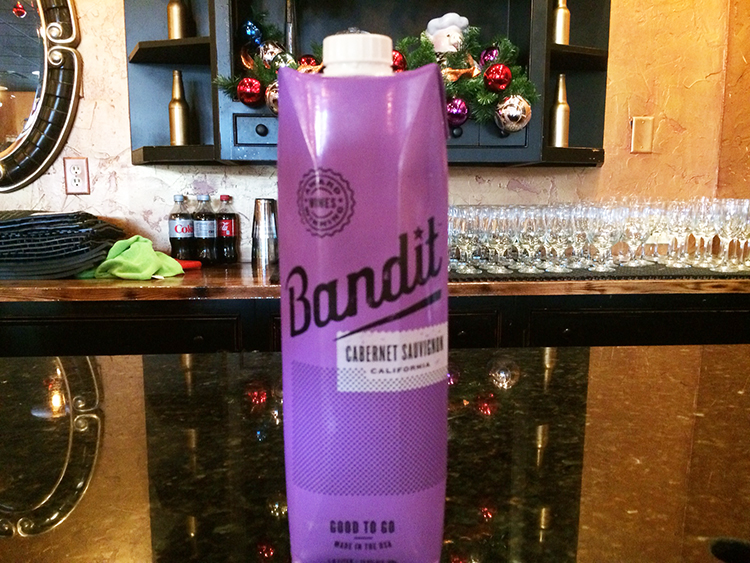 Aroma: “It smells juicy, like the fruit is really ripe.”

Flavor profile: “It certainly has the most complexity. There’s a lot more going on. There’s dark fruit: blackberry, black cherry, and maybe a little cedar. This is definitely, you know, “wine” wine. This is normal, straight-up wine. From a quality-to-dollar ratio—if what you’re going for is wine—I mean, this is that. It’s surprisingly quite good.”

Suggested food or event pairing: “This I think you could serve at any type of meal that a Cabernet would call for. I definitely would consider getting this for the house, especially if I was having people over. If you were concerned about the packaging, you could always throw it in a decanter and nobody would know because it tastes as good as pretty much anything coming out of a bottle in that price point.”