Holy shit! From Redditor “Niehaus” comes some fucking interesting news that Reddit users in Wisconsin love the hell out of swearing. A pair of specific-ass graphs ranked swearing per subscriber in comments of 170 subreddits in all 50 states (plus goddamn Guam), and in 66 American city subreddits. Turns out, Badger State commenters aren’t shy about typing expletives. Wisconsin ranks an impressive number three on the state graph, with about .24 curses per subscriber comment on average. We only trail those assholes in Oklahoma and top-ranked Delaware. According to the graph, our fair state’s Reddit contingent favors “Shit” the most, followed by “Fuck” and “Fucking”—with “Hell” and “Damn” pretty much neck and neck for the fourth most foul in-state utterance.

On the city side of things, Milwaukee is 24th, at approximately .19 naughty words per subreddit subscriber comment (about half that of the top-ranked potty-mouths in Omaha), which is kind of shitty, but still a hell of a lot better than those bastards in Madison (40th) and Chicago (60th). Swear word preference is the same order in Milwaukee as it is on the Wisconsin graph. No shit, Sherlock. Milwaukee is the largest city subreddit in the state. 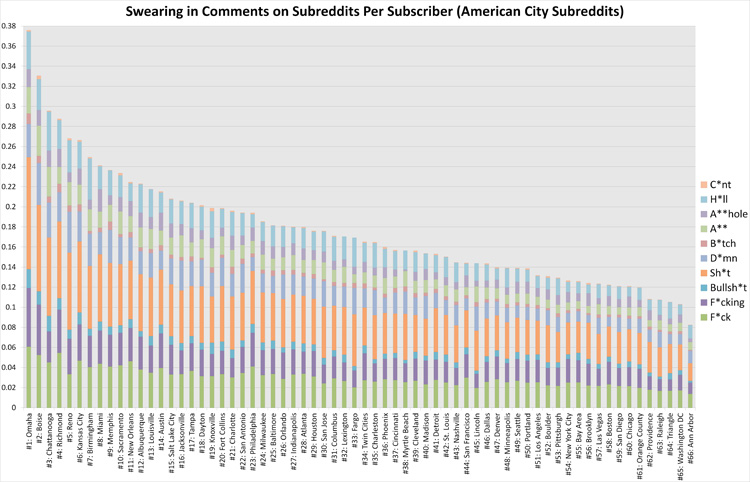 You can also see where Wisconsin and Milwaukee each stand internationally, as well as in non-regional subreddits. Spoiler: Not even fucking close to Northern Ireland.