On Wednesday, September 28, Palomino will host its inaugural adult pinewood derby competition. Yes, the long-running Cub Scout event—in which children thrill to hand-crafted wooden cars on plastic wheels racing down a track while the parents who likely made the cars watch on—has been updated for Milwaukee’s 21+ crowd. Competitors will be racing for prizes from a host of local businesses, and all proceeds will be given to Girls Rock Milwaukee. The event will also feature a sponsor race in which participating local businesses—including Milwaukee Record—will duke it out for derby glory.

In preparation for the event, Milwaukee Record‘s Matt Wild, Tyler Maas, and Josh Hoppert—all former Scouts—decided to dredge up some of their own pinewood derby memories. Who actually built their own cars? Who managed to take second place? Who always finished dead last? Who was most traumatized by Scouting? Let the races begin!

Matt Wild: My memories of Cub Scouts are mixed. On one hand, I remember being intrigued by all the weird pageantry: memorizing the oath, learning to tie that yellow neckerchief, and realizing the Scouting mythology was built around Mowgli and The Jungle Book for some reason. Oh, and the manuals—Wolf, Bear, Webelos—which I found endlessly fascinating and readable. I was a huge dork.

On the other hand, the reality of Cub Scouts was more than a little shabby. It was just a bunch of barely interested 20- and 30-something parents (mostly dads, though I remember a few moms slugging it out) muddling through some bullshit with a bunch of barely interested kids. I was a short, skinny, and shy kid (and teen, and young adult…), and I remember being picked on by my fellow Scouts and my “den leaders.” Still, one of those den leaders ordered WrestleMania 2 on Pay-Per-View for one of our meetings, so I guess it worked out in the end.

Tyler Maas: Though I’m not at all suggesting serving five years in the Cub Scouts is anywhere close to being as physically difficult, emotionally taxing, or as dangerous as serving in the armed forces, the time I spent with my troop from 1991-95 is something I didn’t enjoy and something I’ve taken great pains to block out. Really, it was just a bunch of dorks—present company very much included—meeting up to do dork things with dork adults in the musty basement of a church in Neenah.

After patching Bear Scout, I pretty much had it, but my mom was dating my Scout leader (who eventually became my step-dad and is actually an awesome guy) and she forced me to serve through Webelos. What sticks out most were those dumb jamborees in some middle-of-nowhere camp and selling/delivering popcorn to strangers. I learned how to change a tire once. I’ve since forgotten. Of course, it wasn’t all bad. In my half decade donning a kerchief, there were some good times: the pinewood derby, the rain gutter regatta, eating undelivered Boy Scout caramel corn, and the time we went on a field trip and the elderly owner of a pizza place we were visiting screamed at a fellow Scout for touching raw sausage with unwashed hands. I think both of them are dead now. RIP, guys.

Josh Hoppert: My memories of Cub Scouts are a little limited, as I was only involved for about two years, Tiger Cub and Wolf. As I recall, Tiger Cub activities were totally separate from all the Scout stuff my older friends and cousins were doing. It was a lot of field trips to places like Silverbird Lanes and the Whitnall Park Toboggan Run. Plus, we had white T-shirts with iron-on tigers ironed instead of legit Scout gear. We were sort of like the Orphans from The Warriors, but with root beer. I think my best friend got Sega Master System the day we went to Whitnall Park.

Most of my Tiger buddies dropped out before the second year. Scouts wasn’t a great program at my school, so I don’t think we really did a whole lot. I carved a bunch of soap and eventually got my own Cub Scout knife. Pretty sure it’s rusting in a tackle box somewhere. The guy (named Guy) who ran our den ran a McDonald’s during the day, so we always had orange drink at our meetings.

Your pinewood derby car: Did a parent build it for you?

Matt: It was always pretty obvious which cars had been parent-built. A spray-painted block of wood on wheels? Nice job, Brian! A perfectly rounded and gloss-finished car that looked like something out of Logan’s Run? Nice job, Brian’s dad! These days, pinewood derby kits come with a block of wood pre-cut into a wedge shape, but kits from my era were just solid blocks of wood. Accordingly, the only thing my dad would do was cut the thing into a wedge on his Skilsaw and hand it back to me. From there I would spray paint it red or blue, jam the little axels into the pre-cut grooves, maybe slap a decal on the front, and call it a day. Also, we always got our kit during an annual visit from our town’s Santa Claus. Anyone else, or am I just lumping a lot of awkward Scouting memories together into one, more manageable awkward Scouting memory?

Tyler: I never built my cars. Between my dad figuring it’d just get done faster if he’d do it (which I’d totally do now) and my Scout leader-slash-eventual step-dad, I was lucky if I got to put stickers on. When I could put stickers on, they were crooked and peeling. They made the right decision to leave me out of it.

Josh: I built my pinewood derby car mostly on my own. I know my folks pitched in on a couple tricky parts. Plus, a family friend helped chisel out the bottom to mount the weights (more on that in a second). If there are 10 steps to building the most basic possible derby car, I probably did seven.

Josh: I remember this pretty well. I made weight just fine, but I had glued all of my weights to the bottom of my car, not knowing that the track had a guide strip down the middle of each lane. A dad at the weigh-in illustrated how the weights would get caught by setting my car on top of a sideways pack of cigarettes. That night, a family friend chiseled out the necessary space under my car and re-glued the weights. Good to go. Thanks, cigarettes!

Matt: Even when I was a kid, I found the morning “weigh-in” hilarious. Everyone was so goddamn serious. Kids and adults were dead set on hitting the 5 oz. maximum weight, which meant adding or subtracting stuff like washers, fishing sinkers, and whatever else could be hastily glued to a car. Then there were the cars that had weights counter-sunk into their undersides. Again, nice job, Brian’s dad!

Tyler: Again, these weren’t really my cars, so much as blocks of wood that familiar men built for me. The weigh-ins are foggy, but while that was going on, I suspect I was off somewhere drinking Kick. RIP, Kick.

Matt: Apparently, if you put graphite on the wheels and axels your car will go fast. No one ever told me this in all me years of Scouting. Huh. More on that in a bit.

Tyler: I’m pro-graphite. It’s entertainment, baby. If disinterested parents were going to miss NBC’s Must See TV lineup in the pre-DVR era, at least the heinous cars they were watching were kind of fast. RIP, Jonathan Silverman’s The Single Guy.

Josh: I definitely used it and I have no idea if it did any good. Tastes like crap.

How badly did you lose?

Josh: Second place, people. I took second place in my whole school. In second grade. The guy who won was a few years older than me (probably still is) and his car looked like the Tim Burton Batmobile. I was jealous because I also had a Batman car, but mine looked like Rip Taylor threw up and put Batman stickers on it. Anyway, second.

Matt: How badly? Like, “my car didn’t even make it to the end of the track” badly. Seriously, while other graphite-enhanced cars flew down the track like fucking Matchbox cars shot out of one of those old Matchbox car guns, mine forever dragged their sorry asses down the initial drop and then simply stopped. Lovely.

If memory serves, I quit Scouts not long after my Webelos-year derby. I never looked back. An adolescence filled with D&D, video games, making music and movies with my friends, and getting the shit kicked out of me on a daily basis beckoned, and it was a siren’s call even vaguely creepy den meetings in wood-paneled basements couldn’t drown out. But I’ll always have my memories, even if they’re deeply uncomfortable ones. Oh, and this picture, from the year my den did a project on leaves, apparently. (That’s me on the far right, grinning like a demon child.) Happy pinewood derby, everyone! 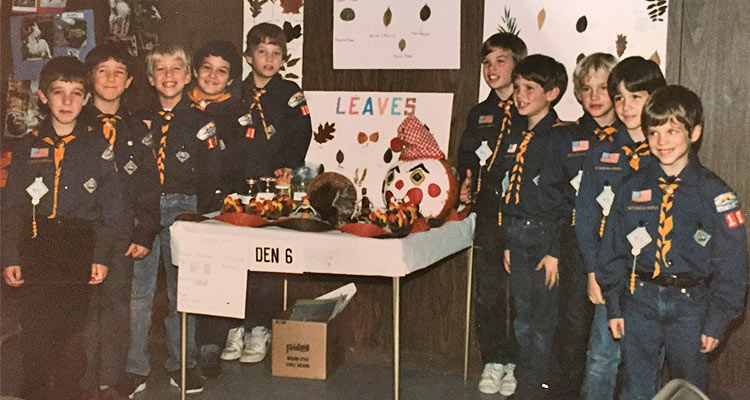