Last night concluded the theatrical run for a drama about a troubled, misunderstood, and forgotten high school kid growing up in the Midwest in the late 1970s. The low-budget indie film has grossed less than $1.5M since first hitting screens in November. Though generally well-received by critics, the movie was only shown at about 110 theaters. Without any significant commercial impact, critical reception, or geographic reach, this film based on a graphic novel by the same name could be considered a forgettable work of art. However, the eponymous protagonist of that film, My Friend Dahmer, cannot be forgotten as easily—especially in Milwaukee, the scene of all but one of Jeffrey Dahmer’s murders.

My Friend Dahmer quietly premiered in a select few U.S. theaters on November 10. On November 22, Times Cinema became the first metro Milwaukee theater to screen the film. It ran there until December 7, then was moved to Avalon Theater in Bay View—an affiliated theater that, along with Times Cinema and Rosebud Cinema, compose Neighborhood Theater Group—from December 8 through December 21.

“We [were] the only theaters showing My Friend Dahmer in Milwaukee, possibly due to pressure on Marcus [Theatres], and possibly Landmark [Theatres], from a very vocal minority who wish to prevent the movie from screening in their hometown,” Neighborhood Theater Group A/V & Promotions Specialist Mark Strube says. “While we respect their opinion and by no means wish to force this film upon anyone, we must acknowledge that there’s a large number of people who wish to see the film.”

Strube says attendance was “fantastic” and that My Friend Dahmer outsold recent banner titles like Justice League and Coco “by far.” He attributes the well-attended Times and Avalon screenings to a mix of local curiosity and to Neighborhood Theater Group being the only group in or around Milwaukee to show the film. Local Marcus Theatres and Landmark Theatres did not show My Friend Dahmer.

“That decision on their part only served to create more buzz and controversy, increasing our attendance,” Strube says. “We have certainly received some criticism, mostly in the way of online comments. However, the vast majority of comments have been positive.”

A 7 p.m. screening on Saturday, December 9 nearly sold out the 213-capacity Avalon. One person present at that showing was Marc Meyers, My Friend Dahmer‘s director. Meyers stuck around Avalon after the screening to answer questions from about his fourth directorial feature.

“People say ‘How dare you?’ or ask ‘Why did you humanize this person?’ My answer is that he was a human being,” Meyers said during the Q&A session. “He rode a school bus like everybody else. He had parents that loved him, and a lot of other things. You can just label him as a monster, but that’s not trying to understand the entire journey of this human being.”

Meyers says he attempted to adhere to the source material—a best-selling 2012 graphic novel by Derf Backderf, a purported childhood friend of Dahmer—when making his film adaptation. Backderf went to Revere High School in Richfield, Ohio with Dahmer. Since the two lost touch before Dahmer raped, murdered, and cannibalized any of his 17 victims between 1978 and 1991, Backderf’s novel and, as a direct result, Meyers’ film by the same name eschews violence and graphic case details in favor of a semi-biographical background and a vaguely sympathetic explanation of how Dahmer may have been led to commit those atrocities later in life.

“I was going to make a movie that was about a real person and tell his high school experience,” Meyers says. “It’s about how a kid slips through the cracks—how his friends, his family, his neighbors, his teachers all missed the signs. And at the same time, at the center was this misunderstood, troubled, and deeply-depraved person. We thought that a portrait of a serial killer as a boy would be an interesting concept for a film.”

One person not interested in the film’s concept is local researcher, historian, and LGBT Milwaukee author Michail Takach.

“It’s been over 25 years since that famous headline, ‘Body Parts Litter Apartment,’ but people are still trying to cash in on the sickness that followed,” Takach says. “It’s like the Friday The 13th or Halloween film franchises. Just when you think the story is over, someone starts telling it again. It’s a real-life American Horror Story.”

When the Dahmer story broke, Takach was 18 years old and just beginning to explore Walker’s Point bars and clubs. “I can’t think of a spookier time for a gay teen to be navigating adult nightlife,” Takash says.

He says he recalls “Missing” posters and families going bar to bar in search of loved ones who hadn’t been heard from in weeks or months.

“After Dahmer was caught, there was an overriding sensation of fear and panic, as the gay community slowly realized what had happened,” Takach says. “LGBT people had experienced bashing, stalking, harassment and violence in the past. But never before in Milwaukee history had gay men been the specific target of a serial killer, and never before had a serial killer dehumanized and desecrated his victims to the extent of Jeffrey Dahmer.”

Conversely, My Friend Dahmer tries to humanize the serial killer by giving viewers a glimpse into the volatile combination of alcoholism, neglect, teasing, homophobia, and isolation that came together to help set the stage for Dahmer’s subsequent actions.

“Movies are empathy machines. You come here and connect with a human being that’s on the screen,” Meyers says. “My main character is this horrible person who will one day become a monster. But it’s my goal as a dramatist not to give you a psychological evaluation or diagnosis, but to make you feel for the characters in the film. My main character happened to be this person. In that way, I had to understand what was real about him before the guy that ended up in that place.”

The near-sellout crowd at Avalon Theater on December 9 seemed to connect with Meyers’ (by way of Backderf’s) vision of Dahmer. Some laughed at things Dahmer, who was portrayed by former Disney Channel star Ross Lynch, said early in the film. There was a sense of discomfort that was expressed through the silence that overtook the theater as the eventual killer dissected animals in the woods and was videotaped by “friends” causing a drunken scene in a shopping mall. Scenes of the closeted teen enduring adolescent embarrassment would have elicited sympathy, if not for (or perhaps in spite of) who all in attendance knew this troubled boy would soon become.

“The mood was pretty solemn. There wasn’t a lot of small talk before the film, few if any reactions to the humorous or horrifying scenes in the movie, and dead silence when it was over,” Takach says. “It was as if we’d attended a wake. On the sidewalk outside the theater, I heard someone say, ‘Well, that’s something I can’t un-see.’ I know how they felt.”

My Friend Dahmer ends when the “misunderstood” main character picks up a hitchhiker named Steven Hicks. The audience is spared Hicks’ murder and the 16 thereafter, but left to remember the horror, pain, and loss the protagonist of this latest Dahmer film appearance would leave in his wake.

Pitch Perfect 3 will replace My Friend Dahmer on the Avalon’s screens tonight, officially ending the locally controversial film’s month-long run in Milwaukee. Depending on who you ask, the latest in a long line of Jeffrey Dahmer bio pics either satiated morbid curiosity, granted a telling perspective of the internal factors that made a monster, was a provocative source of entertainment, or it dredged up painful memories that will always reside close to the surface in a city whose identity will forever be tied to one man. 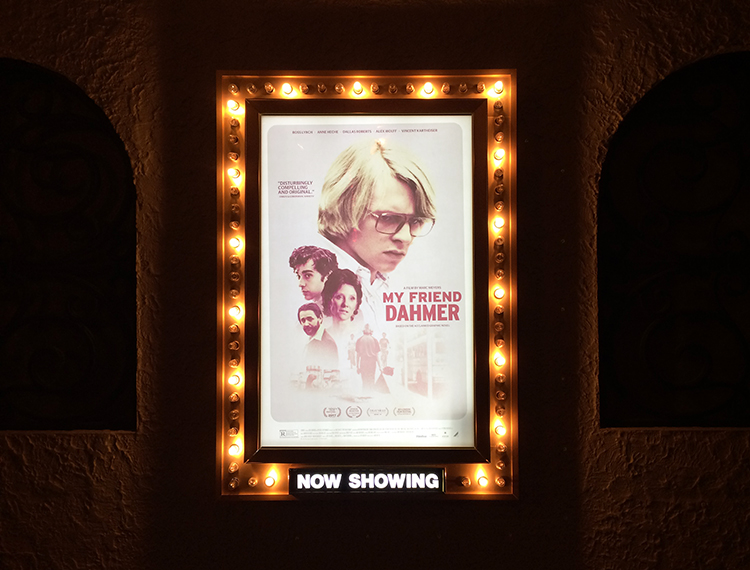