Over the weekend, the Milwaukee Bucks signed Brandon Jennings to a 10-day contract. The move came after the past-prime guard proved himself over a seven-game stint with the Wisconsin Herd. His second stop with the team he once desperately wanted to leave started Monday night. That game against the Memphis Grizzlies found the 28-year-old scoring 16 points, pulling down eight rebounds, and tallying 12 assists—rather unexpected numbers from a castoff who was eating crow in Oshkosh just days earlier.

While putting up those unexpected numbers, Jennings was also wearing an expected number. During his first go-round with the Bucks, Jennings popularized number 3. Tonight, Jennings will take the court wearing 11 on his jersey for the second straight game. You see, in the seasons since Jennings forced his way out of Milwaukee, the Bucks signed Jason Terry, who currently dons number three.

That situation isn’t all that uncommon among professional athletes in Wisconsin. Whether giving up their numeral for an incoming player, returning to their old team to find their jersey had been claimed, or just wanting to shake things up, here are 11 instances of Bucks, Packers, and Brewers wearing two (or three) different numbers.

Ahman Green, Green Bay Packers (30 to 34)
The number 30 belongs to Ahman Green. He wore it in college, in his first seasons in the NFL as a member of the Seahawks, upon being traded to the Packers, and in his subsequent seasons in Houston. One of the best running backs in Packers history wasn’t able to finish his career with the number he loved, as he had to settle for 34 during his abbreviated final season with Green Bay in 2009. By then, the numeral was assigned to John Kuhn, who would’ve caused a riot in the team store if he changed his jersey.

Anthony Morgan, Green Bay Packers (81 to 85)
While most fondly recall the likes of Robert Brooks, Antonio Freeman, Don Beebe, and the brief-but-brilliant Andre Rison blip on the pantheon of good Packers receivers from the mid-’90s, Anthony Morgan seems to be overshadowed. Following the 1995 season, the productive slot receiver had to turn in his 81 jersey when was cut to make way for another receiver/returner by the name of Desmond Howard. Howard, who wore 81, instantly made a name for himself during a season of record-setting and a Super Bowl MVP. Along the way, Morgan was added to the 1996 roster and given 85 to wear during his final partial year of his career.

Brandon Jennings, Milwaukee Bucks (3 to 11)
We’ve covered this. We aren’t sure if 11 has any significance. Maybe it’s the number of opportunities he messed up before getting this last shot with the Bucks.

Doug Davis, Milwaukee Brewers (49 to 25)
Pitcher Doug Davis claimed 49 when he came to Milwaukee as part of the Richie Sexson haul of 2003. He wore the numeral ably in Milwaukee for four seasons, then continued to claim 49 when the Brewers shipped him to Arizona in 2007. That same year, Yovani Gallardo made his Major League debut with 49 on his back. So when Davis made his brief return to Milwaukee in 2010, he had to take 25. However, more people are bound to recall the number 7.51 (Davis’ ERA) when thinking about that dreadful eight-game span.

Francisco Rodriguez, Milwaukee Brewers (75 to 57)
K-Rod had a thing for 57. The incomparable closer wore the number when he got his start with the Angels, but when he signed with the Mets in 2009, the number was already owned by another incredible hurler of the time. Instead of taking Johan Santana’s number, Rodriguez simple reversed it and wore 75. When the Brewers traded for him in 2011, they assigned him 75. Upon learning nobody in Milwaukee wore 57, K-Rod quickly reverted to his former numeral and has worn it for every team since…including his second stop in Milwaukee.

Jeff Cirillo, Milwaukee Brewers (26 to 6)
Fan favorite Jeff Cirillo was a long shot to crack the Brewers roster in 2005, but after turning in an outstanding Spring Training that rendered him uncuttable, Brewers loyalists were given an opportunity to wear their ‘Rillo regalia again. There was only one problem: Damien Miller wore 26. Instead of shaking up team chemistry, Cirillo (who wore six numbers in his lengthy career) settled for 6.

Joel Przybilla, Milwaukee Bucks (6 to 45 to 10)
The “Vanilla Gorilla” started his shockingly long NBA career wearing 6. Along the way, Przybilla took 45, then started wearing 10 when he played in Atlanta, Portland, and Charlotte. When he returned to where it all started in 2012, the journeyman center wore 10 in his second Bucks tenure. 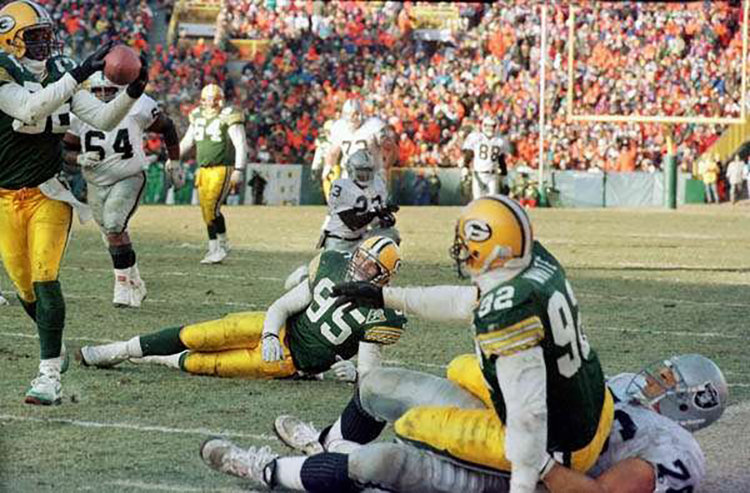 John Jurkovic, Green Bay Packers (92 to 64)
Affable everyman DT John Jurkovic inspired loads of Packers diehards to wear jerseys with the number 64 during his memorable Green Bay career. However, the nose tackle will also go down in history as the second-to-last Packer to ever wear number 92. Yes, Jurko wore the iconic integer in 1991 and 1992, but was quick to give it up when he learned it would help bring Reggie White to town in ’93.

“Hey, if the only difference between Reggie coming here and not coming here was getting my number, ‘Here, you can have it,'” Jurkovic said in a 1993 Chicago Tribune article.

The small act of selflessness (and, you know, Reggie White being amazing) helped turn the franchise around. White’s number is now retired, but you’re bound to see more than a few dudes wearing 64 at Lambeau Field to this day. Jurkovic went on to wear 64 when he played in Jacksonville and 67 in his final snaps with Cleveland. 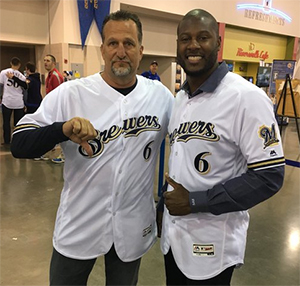 Lorenzo Cain, Milwaukee Brewers (26 to 6)
Other than Jennings’ scenario, this is the most recent and relevant bit of number-shifting news in Wisconsin sports at the moment. When Lorenzo Cain was traded to Kansas City before the 2011 season, he’d worn 26 as his first and only numeral. With the Royals, he embraced 6 as his playing time and star power both increased exponentially. Naturally, he wanted the number when he signed with Milwaukee this winter.

Unfortunately, coach and unofficial team mascot Ed Sedar owned it, meaning the two would have to strike a deal. With the promise of six gifts of Sedar’s choosing, Cain claimed 6 and the coach moved to 0. Don’t worry, Cain can afford it.

Lyle Overbay, Milwaukee Brewers (11 to 24)
While his selective swinging would suggest Overbay might also be picky about his number, the first baseman didn’t seem to care all that much about what was on his jersey. The slugger wore nine different numbers in his professional career, including two in Milwaukee. In his final Brewers/MLB season in 2014, something called Matt Pagnozzi wore 11, so “Ooooooooo!” took 24 and called it a career.

William Henderson, Green Bay Packers (30 to 33)
We’ll always remember William Henderson as the hard-nosed, athletic, and charismatic fullback who led the way for a potent Packers rushing attack of the ’90s and early aughts. Anyone who paid close attention before 1998 also knows him as a player who donned two Packers jerseys. Henderson, who wore 33 in college, had to settle for 30 when he got to Titletown in 1995, as double-threes belonged to shutdown corner Doug Evans at the time. But when Evans went to Carolina in 1998, Henderson quickly snatched up 33 and wore it for the duration of his quietly remarkable career. If there’s ever a Packer worth re-purchsing a jersey of, it might be Henderson.