Who knew that a low-budget film trilogy featuring crawling severed hands, literal fountains of blood, a chainsaw montage, and a time travel finish would launch two of the longest-lived careers in Hollywood? The Evil Dead films were the reason Sony brought Sam Raimi to the Spider-Man films; without them, our current superhero landscape would be far less likely. It also turned Bruce Campbell into a geek icon who is both vulnerable and unflappable, handsome and hilarious, and given him parts in everything from prestige television to the kinds of films that died at Blockbuster never to be seen again. Campbell spent Saturday night in Milwaukee at the Pabst Theater, bringing not just a print of his classic film Evil Dead 2: Dead By Dawn, but also some great stories about his friend Sam, his process, and his highs and lows in Hollywood. 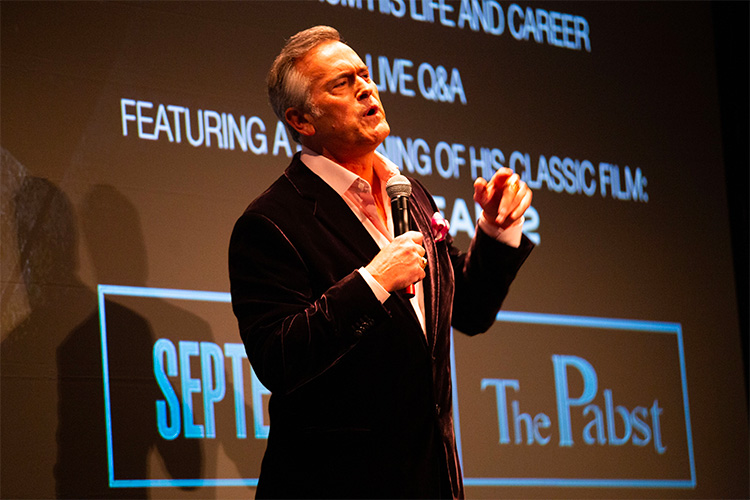 Evil Dead 2 is a great way to kick off October and the true descent into the Halloween season. It’s a half-sequel/half-remake of Evil Dead, which according to Campbell was because the filmmakers didn’t have the rights to the original, so they decided to condense everything that happened in the first act of the sequel. He also took the time to tell the story about the one good thing to come out of the Stephen King clunker Maximum Overdrive besides the Green Goblin truck: overlapping crews got Stephen King to make a phone call to Dino De Laurentiis and convince the producer to finance Raimi’s sequel. 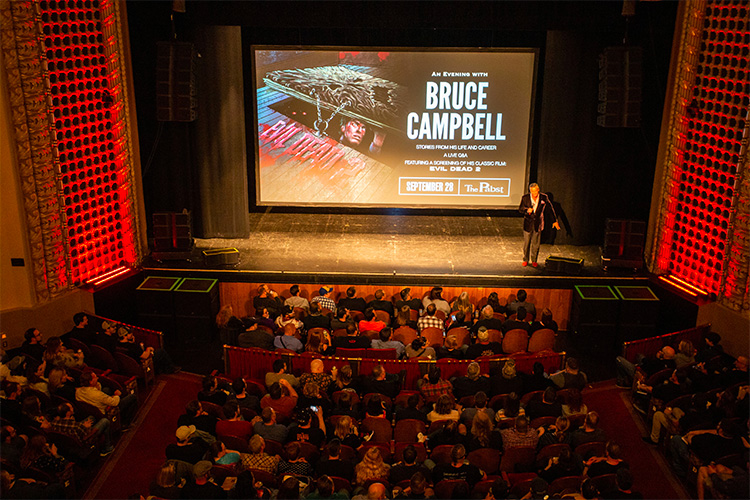 There’s a lot of pop culture elements that came out of this film, be it a wider knowledge of the Necronomicon, the chainsaw as a viable demon slaying weapon, or the catchphrases that Duke Nukem 3D shamelessly stole to make its titular character cooler by association. It’s easy to overlook the powerful one-two punch of Raimi’s kinetic filmmaking and Campbell’s fearless physicality. Raimi’s constantly moving cameras give every shot a manic energy that overlook the tiny budget and keep the audience guessing where the next creature or blast of gore is coming from like a haunted house ride that feels like it was put together without instructions. Campbell switches from comedy to horror to drama and back again and carries a lot of this movie with his reaction shots. His evolution from sensitive piano playing lover to grizzled demon slayer feels earned because more awful things happen to him in 84 minutes than 15 seasons of Supernatural. 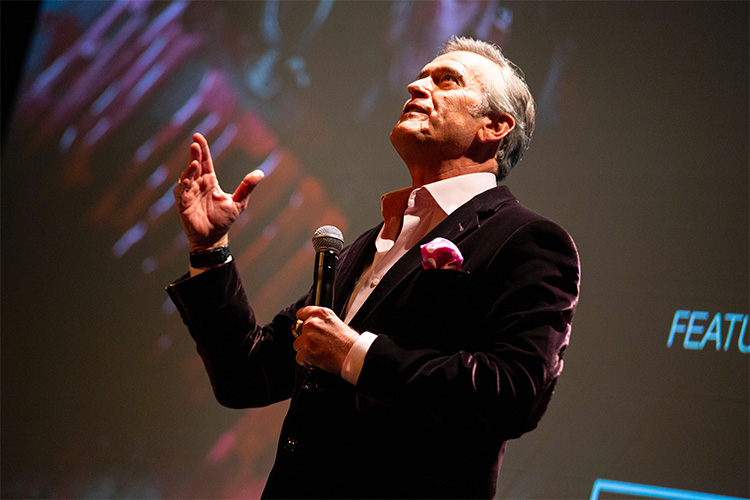 Campbell brought plenty of rowdy energy to the screening. His short introduction before the movie had the feeling of a school day where they couldn’t find a sub so they got the P.E. teacher to wheel in a TV and throw in a movie to watch for the whole afternoon. His time after the screen was half Q&A and half opportunity to reminisce about the career spawned by the Evil Dead series. Plenty of works were touched on, such as the follow-up film Army Of Darkness, the recent sequel series Ash Vs. Evil Dead, the Twister knockoff Tornado!, the late, lamented The Adventures Of Brisco County Jr. and the unlamented Jack Of All Trades. By the end, the crowd was shouting out questions and Campbell kept them entertained with some great stories about other actors. It’s hard to say whether the film or the talkback was the better part of the show. But they were both definitely groovy.