In the dystopian world of last year’s The Purge and this year’s The Purge: Purge Harder Anarchy, society is granted an annual 12-hour period of complete lawlessness. Theft, murder, and anything else despicable or nasty are completely legal during the Purge, including killing off a seriously slumming Ethan Hawke. As far as low-ish budget genre films go, The Purge series isn’t half bad, even if its politics are about as sophisticated as your typical “Anonymous” screed and/or that episode of Star Trek with the same premise.

But what if The Purge actually existed? Or, more accurately, what if a dopey high school student cooked up a phony Purge scare online, and people unfamiliar with things like “Snopes” and “Google” took it seriously? Yes, that’s exactly what happened last week when a Louisville, Kentucky teen tweeted an image claiming a real-life Purge was coming for Kentucky, Florida, Louisiana, and other states on Friday, August 15. It was complete bullshit, of course—crime levels were reported as “normal” for that night, and residents of Kentucky, Florida, and Louisiana went back to being their crazy selves, no Purge needed, thank you very much.

Still, a thorough debunking hasn’t stopped a copycat hoax from causing some alarm in Wisconsin. In a similar online image making the rounds on social media like so many hoisted ice buckets, Friday, August 22, is marked as prime Purgin’ time in Madison, Milwaukee, Appleton, Fond du Lac, and Green Bay. In response, police departments in the northernmost cities held a joint meeting earlier this week, with an Appleton sergeant saying “We’re aware and we’re working with other agencies around the state just to make sure we’re on top of any issues that might arise.” Again: Snopes. 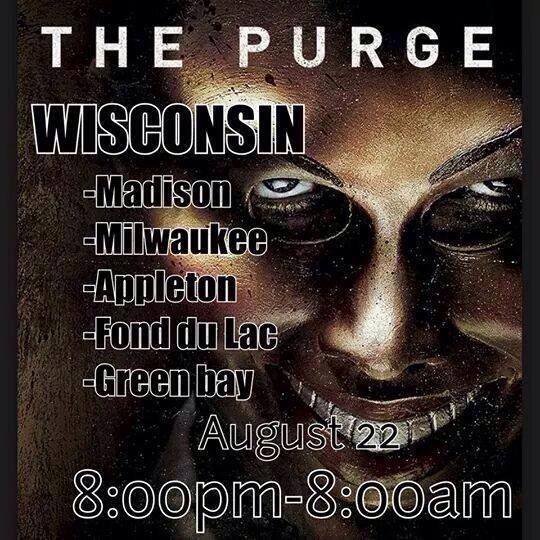 Perhaps unsurprisingly, officials in Milwaukee and Madison have remained mum on Friday’s impending Purge, silently citing more important shit to worry about. Though you know Sheriff Clarke would totally be into it.