On Saturday, June 20, some of the premier punk bands based in Wisconsin and elsewhere in the Central Standard Time zone will converge upon The Metal Grill to partake in the inaugural “Dummerfest” event. The single-day festival—which was organized by Direct Hit! frontman Nick Woods under his Who Cares Who promotional entity—will bring approximately a dozen punk, pop-punk, and hardcore acts to the Cudahy club for a 12-hour all-ages undertaking billed as “The Dummer Alternative.” During last night’s Direct Hit! set at The Metal Grill, Woods formally announced the event and unveiled the first round of bands.

“I wanted an excuse to get some of my favorite bands from the middle of the country to all come and hang out in my town on the same day,” Woods says in a press release. “I’ve had a lot of fun booking shows around Milwaukee over the last year for a lot of new friends, and I’m hoping this party will help convince many more to make our city a tour stop in 2015 and 2016, and help support live music in smaller, independently-run venues.”

Tickets for the first Dummerfest 2K15—which Milwaukee Record is proudly sponsoring, by the way—can be purchased at The Metal Grill’s website for an early bird fee of just $18 until March 26. After that, tickets will be $20 in advance and $25 at the door (while they last). Woods emphasizes that all profits will go directly to the bands. Stay tuned for updates as this awesome event approaches.

UPDATE: As if the original lineup isn’t great enough, the first round of additions was announced. Madison-based pop-punk outfit Masked Intruder and Coralville, Iowa’s own Lipstick Homicide will also play. Stay tuned for weekly updates as Dummerfest approaches.

UPDATE 2: Milwaukee-bred rapper Juiceboxxx, Chicago’s own Meat Wave, and Big Zit have been added to the lineup. Additionally, a Dummerfest Earlybrid Show featuring Teenage Bottlerocket, The Copyrights, and Avenues will precede the actual fest at Metal Grill on Tuesday, June 16.

UPDATE 3: Louisiana hardcore band PEARS and Milwaukee rock quartet Midnight Reruns round out the “main event” lineup, but stay tuned for updates on pre- and post-Dummerfest events and other exciting things that will make this first-year festival great. 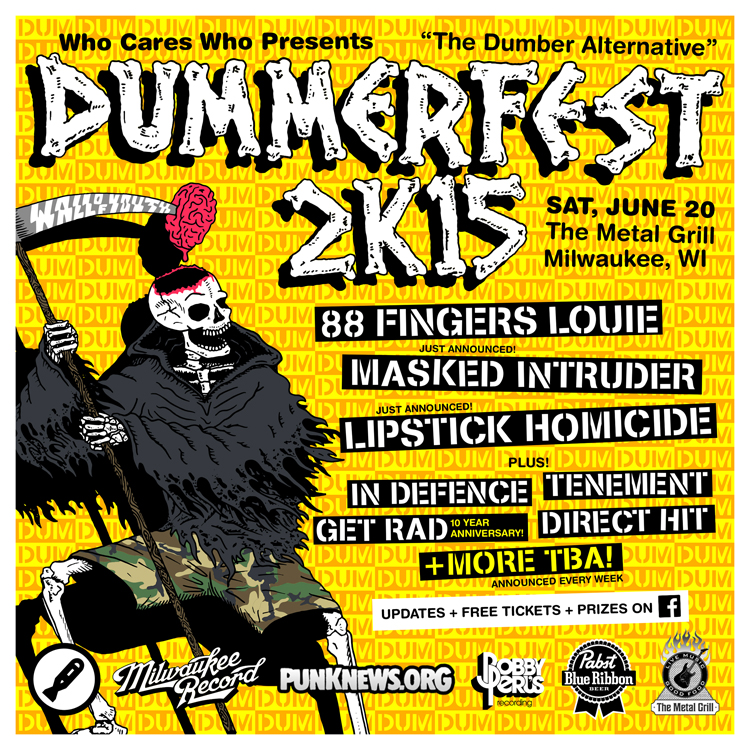