In case you missed it, we drove to Green Bay last month to see a show from Corey Feldman and his band of Angels. We wrote a (remarkably fair and evenhanded) review of said Corey Feldman show. Corey Feldman then proceeded to call us a “total deusche”: 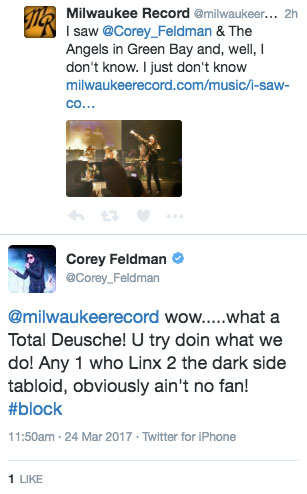 So yeah, it was…an experience. (Feldman was apparently upset we linked to a 2013 Vice piece about his birthday party, which we won’t do again here.) And yeah, Corey Feldman & The Angels are now coming to Shank Hall on Wednesday, June 28 (the first day of Summerfest). General admission tickets are $20. VIP tickets are $75. Here we go again.

Per our Green Bay review, here’s what you can expect:

• Corey Feldman. He came out wearing a red, Michael Jackson-esque jacket and a gold, Daft Punk-esque hoodie. Many more costume changes were in store, including a straight-up Michael Jackson outfit (complete with a “Billie Jean” tribute) and the studded black leather jacket he wore in Dream A Little Dream. His long, dyed-black mane was from the Damien Echols school of hairstyles, and at one point he took off his shirt. Dude is in good shape!

• Corey Feldman on a hoverboard.

• Corey Feldman getting real with a song about “what’s happening in the world right now.”

And here’s video from the Green Bay show. See you at Shank in June!