The first time I saw Alice Cooper was at the Fond du Lac County Fair in 2006. I had plans to see him again, in 2010, at Waterfest in Oshkosh, but that show got cancelled because of a torrential storm, and I instead got stuck inside Oblio’s for six hours drinking brandy. When I saw he was coming to the Wisconsin State Fair this year, and that it was on a Friday, I decided it would be a good idea to finally see him again, and to see what the State Fair had to offer for fish.

I counted five places listed online that serve some sort of fish at the Fair: Slim’s Lakefront Brew Pub & Eatery, Door County Fish Boil, Catfish Johnny’s, Joey’s Seafood & Grill, and Saz’s Taste of Wisconsin. Since I really had no plan as to which place or places I wanted to try, and because the setting of the State Fair is a little more frenetic and unpredictable than your average fish fry location, I decided I would document the evening in the same vein as some of Milwaukee Record‘s great “minute-by-minute recap” pieces. And while there is no way in hell this will be as brilliant as the piece on 50 Cent at the Oak Creek Woodman’s or the one on the new IKEA, I hope you get something from this, maybe.

5:57 p.m. – But where the hell am I at the State Fair? Oh, I’m stuck between the Swine & Goat Barn and the Poultry & Rabbit Palace. How do I get through here and find fish…to eat?

6:03 p.m. – Oh look, there is the Water Street Brewery. That’s the place that has those deep-fried Old Fashioneds. I guess I usually get an Old Fashioned before fish… 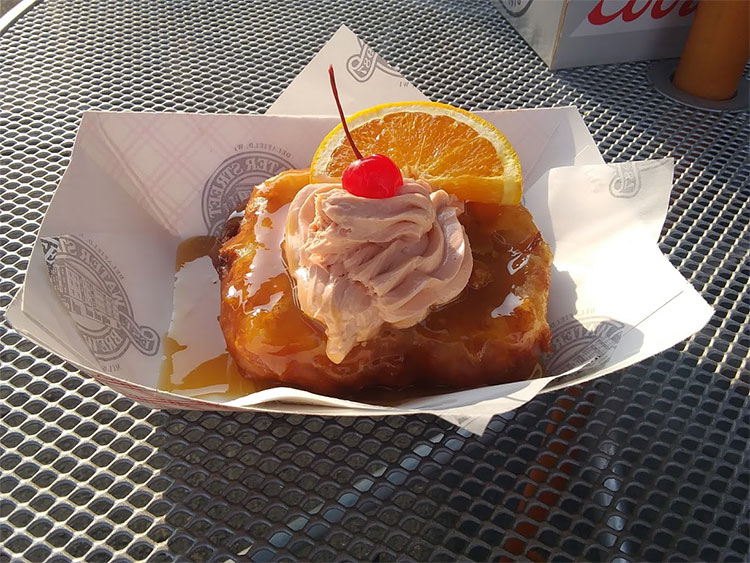 6:11 p.m. – That was heavy. I can barely walk now and I don’t even think there was booze in that thing. My hands are sticky, I’m really thirsty, and I could go for a beer. But where’s the fish?

6:20 p.m. – After first walking right past it, I have arrived at Slim’s Lakefront Brew Pub & Eatery.

6:28 p.m. – A guy from Lakefront Brewery asks me if I am from Milwaukee and gives me a Lakefront bottle opener.

6:33 p.m. – The fish arrives. I ask about the relationship between Lakefront and Slim’s. Is this connected to Slim McGinn’s in Brookfield? (I later find out it is.) “That I could not tell you,” a worker named Jack tells me. As he walks away, I wonder why he doesn’t know anything about the place he works at. I also wonder why he never asks for my money. 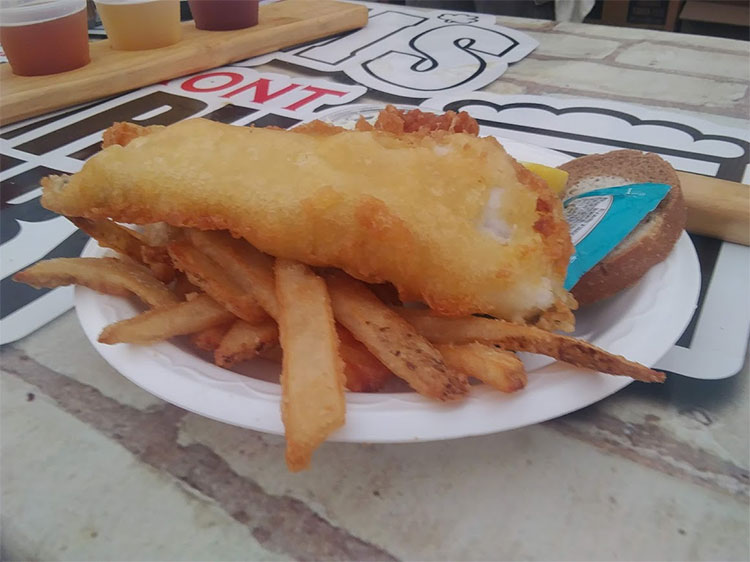 6:35 p.m. – Oh no, this tartar sauce is in a packet! It’s called Chef’s Quality.What quality of chef are we talking here?

6:38 p.m. – Hmmm…the sign says “Lakefront Beer-Battered Walleye.” Doesn’t that imply that it is made with Lakefront beer? By the time I notice this seeming contradiction, no one is nearby for a follow-up question. I am also still too exhausted from eating the deep-fried Old Fashioned to properly articulate my thoughts, so I fail to investigate this any further.

6:40 p.m. – Hey, that guy down the bar looks familiar. I saw him drink a pitcher of beer by himself at Gee Willickers once.

6:41 p.m. – This fish fry is much better than the ones I had this year at Summerfest. I mean, remember the french fries at the Venice Club? These fries are soooo much better. The coleslaw is extremely creamy—almost too creamy—but still pretty decent. The walleye has a nice light, crisp batter, and the walleye flavor really comes through, which is a good thing.

6:57 p.m. – There’s one more beer left on the flight. I think it’s an hour until Alice Cooper starts. I should probably check to make sure on the time, though.

7:01 p.m. – Elvis Presley is here and is arranging his water bottles on a table for tonight’s show. Actually, it’s John Van Thiel: The Voice of Elvis. There’s a bit of a difference, I guess. I remember that I saw “Fat Elvis on a Stick” on the menu. Is John Van Thiel aware of this? Should I tell him? I start getting a little nervous and decide to leave.

7:07 p.m. – Almost every damn kid has a plastic trumpet that is making an unbearable racket. I see one kid has broken their trumpet. Thank you, Jesus.

7:16 p.m. – Holy shit, look at these guys! I wonder who they are. Oh, it’s The Glam Band, warming up the crowd that is gathering outside of the Main Stage before the Alice Cooper show.

7:19 p.m. – One of the guys is now in the crowd playing the cowbell. This is all too much. I need to leave and start looking for more fish. I walk away as they are playing “We’re Not Gonna Take It,” because I can’t take it anymore. 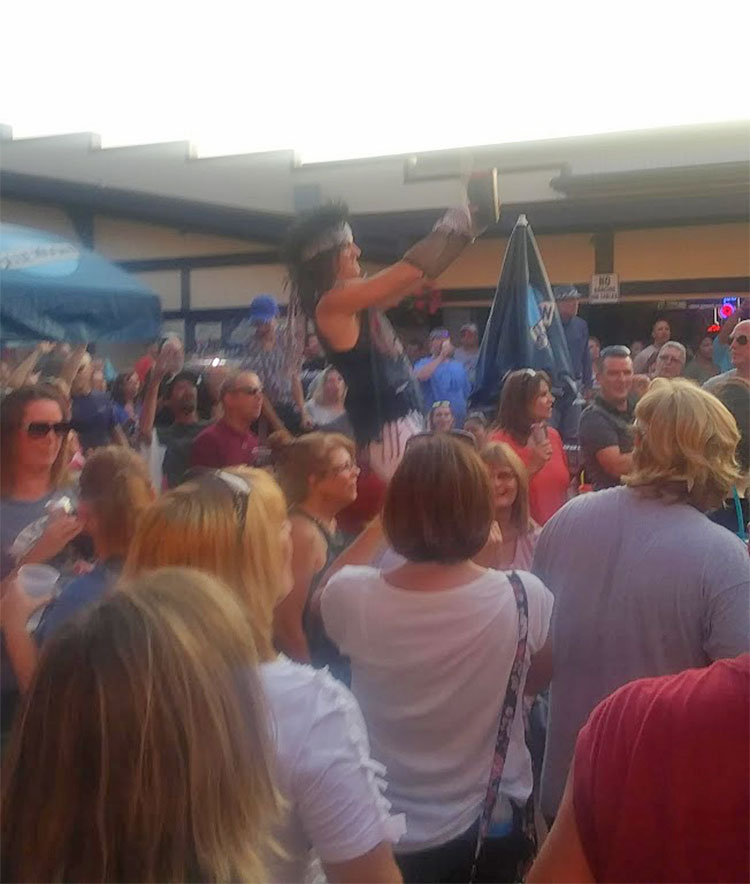 7:47 p.m. – I’m sitting on a red bench outside of Door County Fish Boil. Inside, a cover band can be heard playing Bon Jovi’s “Runaway.” I know I have to go in there. They have “Fish and Chips On-a-Stick.”

7:58 p.m. – I’ve finally made it in. I look at the paper menu and don’t see Fish and Chips On-a-Stick listed. I show them their online menu, and ask if they have what I want, and they say they don’t. I loudly yell “Smelt boat!” a few times, trying to get my order projected over the cover band. My ears are trying not to bleed.

8 p.m. – I start running toward the Main Stage with my smelt boat. I try a piece of smelt and it’s a little stale. I keep running.

8:05 p.m. – I get to the Main Stage and try to find seat. A guy stops me after seeing my Ramones shirt. He says he saw them in Milwaukee years ago. I ask him where, and we both yell “The Palms!” at the same time. I have trouble finding my seat. Life isn’t always easy. 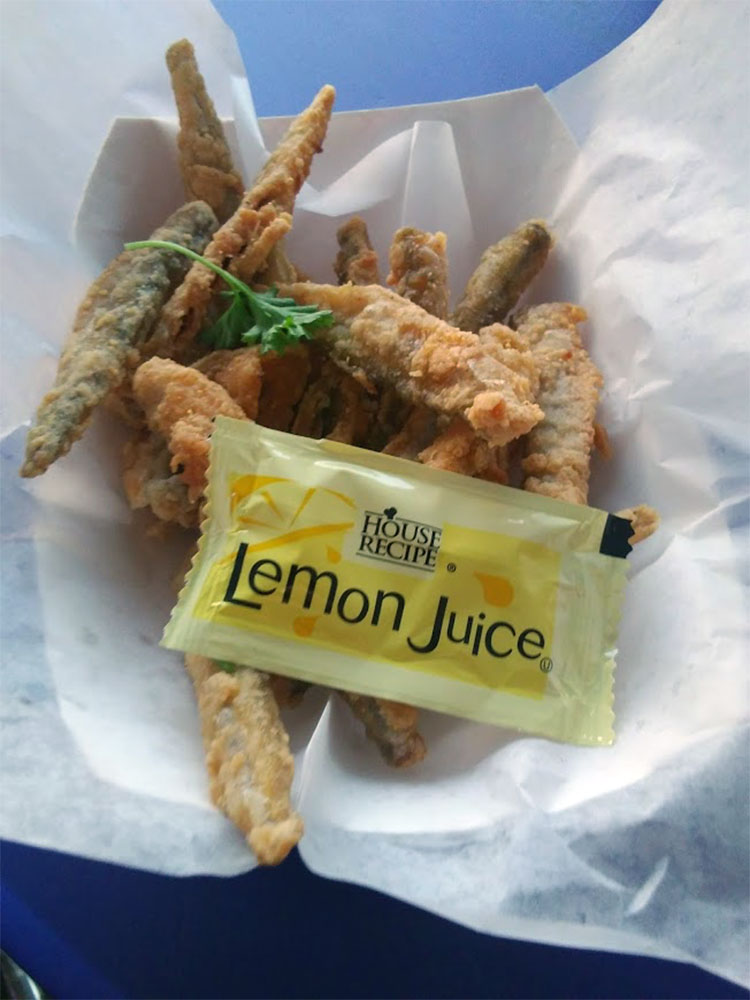 Sometime later – As I finished off my smelt, Alice went into “Woman Of Mass Distraction,” which includes the lyric: “She hooked me, she cooked me, she practically filleted me.” I was thankful to finish my smelt during this song, instead of during the following one, which was “Poison.”

Takeaways: The deep-fried Old Fashioned almost killed me; I think there are five places at the State Fair that serve fried fish; Lakefront Beer-Battered Walleye is apparently battered with PBR, but is still pretty good; I’m not too fond of most ’80s cover bands, and I should just lighten up; Alice Cooper is 70, is still really good live, and still gets his head chopped off by a guillotine—he also improves the taste of smelt, I think. 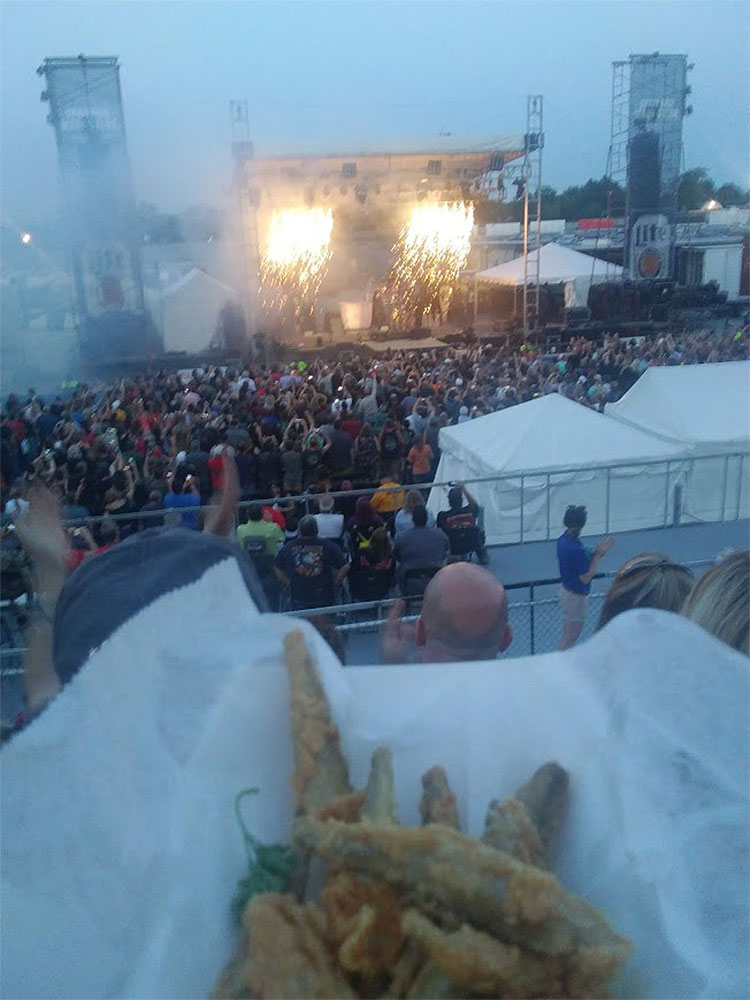