It’s November, and you know what that means. It’s time to get out and vote. Yeah, yeah, the Presidential Election is important and all, but that race only holds a fraction of the local impact that another ballot has on the city. Going on its 26th year, Shepherd Express‘ “Best Of Milwaukee” competition gives out hundreds of tiny plaques—likely with ad contracts accompanying them—to area businesses (and more than a few national chains) each year and, in doing so, determines things like Milwaukee’s best vape shop, finest doggy day care, most excellent cosmetic dentist, and premier adult retailer. ShepEx certainly isn’t the only local media outlet to dole out awards, but BOM always seems to be the least scientific and the most perplexing means on honoring Milwaukee’s best and brightest.

After weeks of nominations, the finalists for the 269 (!) “Best Of Milwaukee” categories were released today. As expected, the ballot features the usual smattering of tone deaf music nominees, some overt glad-handing for existing advertisers, nods to national chains, inclusion of numerous non-Milwaukee establishments, and enough weird categories and oversights to make you wonder why they’re even doing this. Here are some highlights from this year’s ballot.

• None of the three Best Hard Cider nominees are based in Milwaukee. The closest is more than 35 miles away
• None of the Best Art Supply Store nominees are based in Milwaukee
• UW-Milwaukee is competing against UW-Green Bay, UW-Whitewater, and UW-Waukesha for Best Public College/University in Milwaukee honors
• Whole Foods is nominated for five awards
• Not even counting Whole Foods and the restaurants in the Best National Chain category, franchises like Goodwill, REI, Barnes & Noble, Blick, Michael’s, Hobby Lobby, and (Milwaukee-headquartered chain) Cousin’s got nominations
• Lyft and Uber are up for Best Cab Company
• Half the nominees in the Best Comedy Club category aren’t comedy clubs. They’re monthly comedy showcases. One of the showcases takes place in one of the comedy clubs nominated
• Cherry Pie, a cover band, is nominated for Best Metal Band…and Best Cover/Tribute Band
• There are four categories devoted to lawyers and six related to banking/finances
• West Allis Cheese & Sausage Shoppe and Plum Lounge lead the Food/Drink nominations with five each
• Mozzaluna is only nominated twice this year 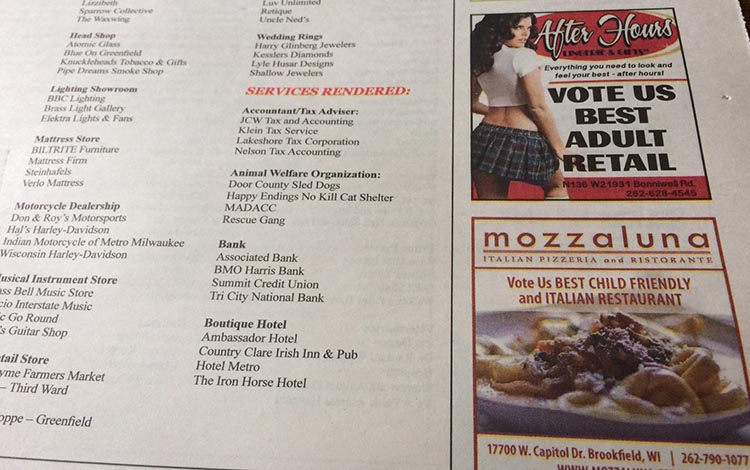