It technically isn’t Halloween until next Tuesday, but the vast majority of Milwaukee’s seasonal celebrations are to take place over the weekend. From Friday night through October 31 itself, the city will play host to cover concerts, “spooktacular” drag shows, dance parties, scary karaoke and film screenings, restaurant pop-ups, and more. If you’ve yet to make plans or you’re just looking to make the most of one of the year’s best weekends, check out our guide of Milwaukee Halloween events.

Zombie Prom @ Frank’s Power Plant
Wrenchin’ Wendy’s 40th birthday party will double as a Zombie Prom at Frank’s, which will include a horror-pop DJ set by Lisa Weber.

Lincoln Warehouse Halloween Street Party
The Lincoln Warehouse is booming with activity and an abundance of breweries and distilleries. Join Enlightened Brewing, Eagle Park, Twisted Path, Bittercube, Top Note Tonics, and many of the warehouse’s other tenants for 10 hours of fun complete with food trucks, drinks, and live music between 2 p.m. and midnight.

Haunted Barrel Candy Porter release @ Third Space Brewing
Speaking of breweries, Third Space will celebrate the holiday by giving beer aficionados a new treat. Saturday marks the release of the Haunted Barrel Candy Porter. An even more limited “Haunted Hazelnut” variant will also be available for $20 per 750 ml bottle. Get there close to noon, as both are expected to sell out fast.

The Nightmare Before Christmas with Milwaukee Symphony Orchestra @ Riverside Theater
Milwaukee Symphony Orchestra will provide the score during a screening of Tim Burton’s macabre holiday classic, The Nightmare Before Christmas. If you’re already booked on the weekend’s busiest day, you’re in luck. There will also be a Sunday screening/performance.

Halloween Covers Extravaganza @ Linneman’s Riverwest Inn
The covers continue at Linneman’s with tribute performances of material from Hank Williams, Patsy Cline, The Undertones, The Damned, and The Knack.

First Five (Horror Film Edition) @ Mojo Dojo (Urban Harvest Brewing)
First Five is an innovative improv exercise where the first five minutes of an obscure VHS film is screened, then the rest of the movie’s plot is filled in and acted out by performers. This time around, the Mojo Dojo cast will act out a horror flick.

5th Annual Talking Heads Halloween Dance Party @ The Gig
If you like the Talking Heads, head down to Dousman Street for a night of covers.

Tricks Treats Hip-Hop @ Cactus Club
Cactus Club is offering the holy trinity: Tricks, treats, and hip-hop. If you like even one of those three things, come on down.

Twisted Dreams Masquerade Ball and Double Feature @ The Underground Collaborative
Twisted Dreams has a little bit of everything. It’s one part burlesque show, one part costume ball, and one part movie theater. Keeping with the holiday spirit, this edition will include screenings of Holy Hell and Another Yeti.

The Nightmare Before Christmas with Milwaukee Symphony Orchestra @ Riverside Theater

Pre-Halloween Show with Haunter + Dash Hounds, Taylor Campbell, and Apollo Vermouth @ Riverwest Public House
Nothing about this show relates to Halloween, but there’s a band called “Haunter” on the bill, so we’ll include it anyway. 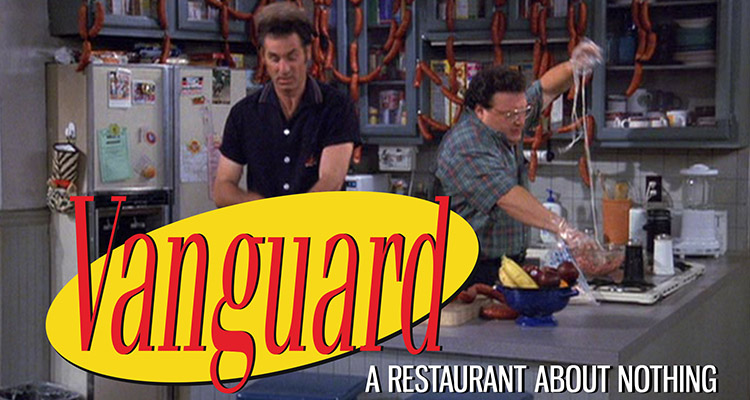 “A Restaurant About Nothing” @ The Vanguard
On Tuesday, October 31, The Vanguard will temporarily close in order to spend Halloween as a Seinfeld tribute restaurant known simply as “A Restaurant About Nothing.” After the restaurant Milwaukee knows and loves closes in the afternoon to allow redecorating to occur, it will reopen at 7 p.m. with a new name, a new concept, and food and cocktail menu that’s inspired by the series. The restaurant will be decorated with a variety of Seinfeld inside jokes, and a specially curated soundtrack will add to the theme. A small run of t-shirts with the new restaurant’s name will be available well. Seinfeld-inspired costumes are strongly encouraged

Secret Symphony: Fright Night Edition @ Turner Hall
Milwaukee Symphony Orchestra is sure keeping busy this month. Following their Nightmare Before Christmas doubleheader, they’ll perform some more seasonally-appropriate songs, though the set list will be kept secret. Adding to the songs are holiday-themed snacks and cocktails, as well as “interactive pre-concert activities.”

Halloween At High Dive with Blessed + Tunic, and Pay Up @ High Dive
Other than the Halloween-nod in the name, this doesn’t have much to do with the holiday, but this is a chance to catch some touring talent and young Milwaukee punk outfit, Pay Up for free on a Tuesday night.

Saebra & Carlyle + King Eye & The Squirts, Drugs Dragons, and Iron Pizza @ Cactus Club
In honor of Cactus Club bartender and Milwaukee artist Saebra Laken’s birthday, a handful of local bands (including her new duo) will take the Bay View bar’s stage for an excellent mid-week show that just so happens to land on Halloween proper. This show is free.