Football is coming back and we’re thrilled to announce that our Milwaukee Record Halftime Show concert series is also returning for another year. This season, we’ve assembled a stacked roster of 16 performers that will provide FREE all-ages entertainment during halftime of Green Bay’s games. Get ready to see 15-minute shows from the likes of Bug Moment, Rat Bath, Jon Henry, and many more. This year’s lineup also offers a few surprises, including a show by Green Day Packers (a novelty band with a very specific concept that’s fronted by Milwaukee Record‘s own Tyler Maas), a “British Invasion” cover set by Cabin Essence to coincide with the morning game in London, a rare live outing by “Lap Steel Metal” project Velocihamster, and a sendoff show by the GGOOLLDD side band 1-800-HUG-ME.

Like previous seasons, the concert series will take place at Cactus Club. Also like previous seasons, Miller High Life will sponsor our football-focused festivities, meaning fans can enjoy “The Champagne Of Beers” and Miller Lite for $2.50 a bottle or $10 for a bucket of five beers all game long. This year also brings two new sponsors into the mix. Great Lakes Distillery’s award-winning Rehorst Vodka will be featured in Cactus Club’s beloved bloody marys (which will be on special for $8 during games). Meanwhile, Awkward Nerd Events will occasionally pop by for giveaways to their upcoming events and other fun complements to the in-game/on-stage action.

Like previous seasons, there will be a DJ playing music during commercial breaks. There will also be touchdown shots (both regular and N/A options will be offered). Games will be shown in the bar as usual, but for the first time ever, they’ll also be shown on a projector screen in Cactus Club’s back room. Moon Cherry Sweets will be selling vegan bakery goods most Sundays. And we repeat: THERE’S NO COVER CHARGE for the concerts. Check out the full lineup below! (Game times and performers are subject to change.) 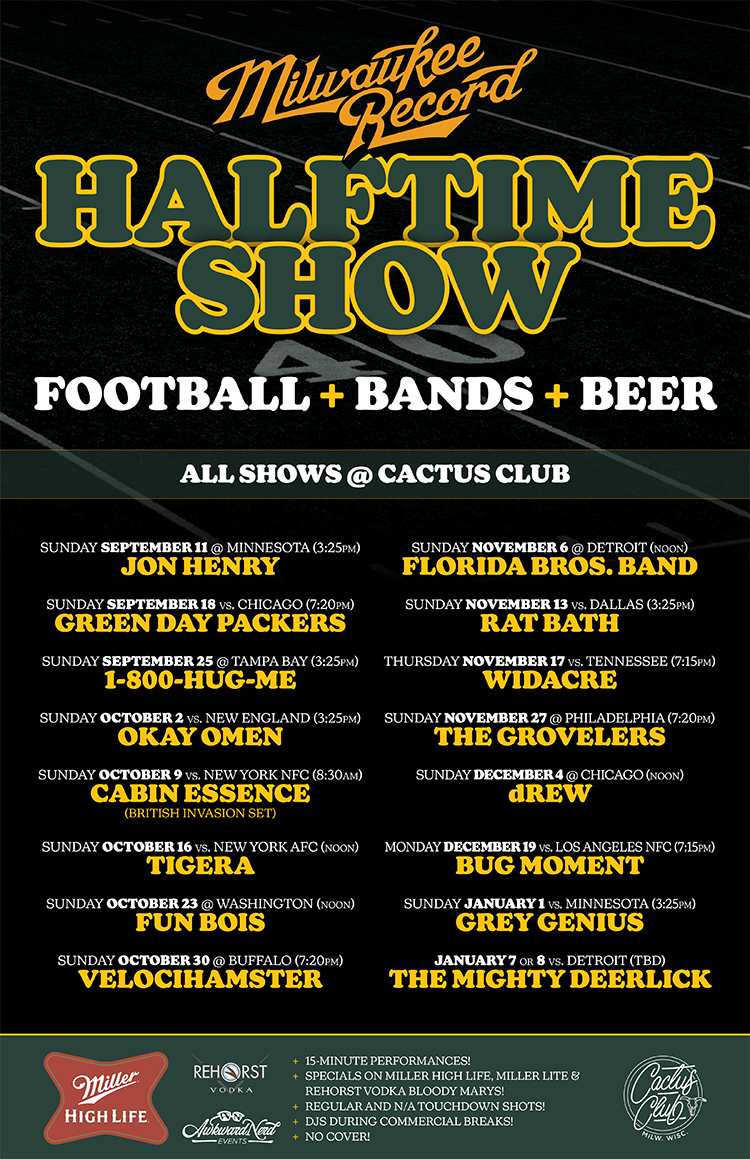