Back in June of 2015, a dozen (primarily) punk and hardcore bands hailing from five states came to The Metal Grill in Cudahy for an unforgettable day of all-ages fun known as Dummerfest. The inaugural festival featured a guy lighting his own shirt on fire while he was still wearing it, a ski mask-wearing gradeschooler crowdsurfing during Masked Intruder’s set, and 12 hours of tunes supplied by 88 Fingers Louie, Tenement, Get Rad, PEARS, Meat Wave, Juiceboxxx, and Direct Hit! (whose singer, Nick Woods, organized the event), and more.

Following a year away, Dummerfest will return—this time with bigger bands and sights set on addressing the few hiccups the first-year fest faced (faster food service is promised!). On Saturday, June 24, The Metal Grill will host 13 bands, including acts with ties to Fat Wreck Chords, Red Scare, and Epitaph Records. Advance tickets have been on sale for a few weeks, but the lineup wasn’t made public until today. Here it is!

Off With Their Heads
Negative Approach
PEARS
The Copyrights
Toys That Kill
Typesetter
The Brokedowns
The Slow Death
Rational Anthem
83 Wolfpack
The Eradicator
Avenues
Direct Hit! 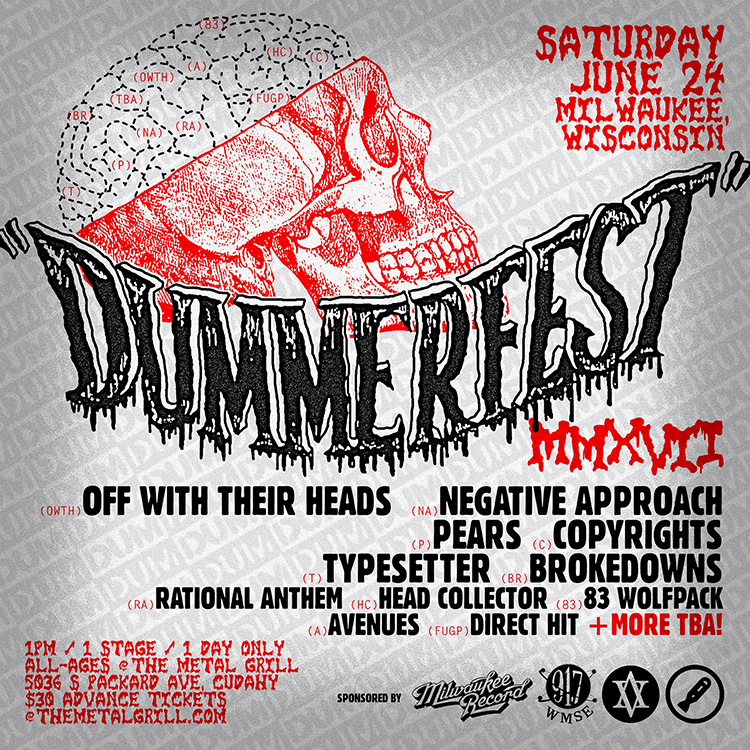