Back in 2010, Milwaukee was hit with not one, but two nights of flash flooding in a single week. The night of July 15/16 saw basements and streets overflowing with rain, but it was the second night, July 22/23, that would go down in infamy. Yes, that was the night a 40-foot-wide, 20-foot-deep sinkhole opened up on Milwaukee’s East Side like the goddamn Hellmouth itself and swallowed a Cadillac Escalade whole. Driving luxury SUVs through the intersection of Oakland and North would never be the same.

Local news was all over the story, of course. WISN12 talked to a frazzled witness to the Cadillac Escalade that was swallowed by an East Side sinkhole, and nabbed a priceless “The car’s in the hole!” quote in the process:

Mark Pawlik, 46, was walking across the North Ave. bridge and talking to his friend on the phone when he noticed a traffic light had sunk into the ground.

Just the red, yellow and green lights were above street level. He told his friend he’d call him back. It was still pouring rain, but he wanted to stop and take a picture.

A moment later a man driving a black Escalade pulled up to the intersection at North and Oakland avenues, going east on North Ave.

“The Escalade just went wham!” Pawlik said. “Everything went down. The power line went like ‘pow’ and then I think it was sewer water was just pouring into the hole.”

Pawlik leaned over the edge of the sinkhole, which was then about 15 feet by 15 feet.

The Cadillac Escalade that was swallowed by an East Side sinkhole made national headlines as well, including this one from Gawker (remember Gawker?): 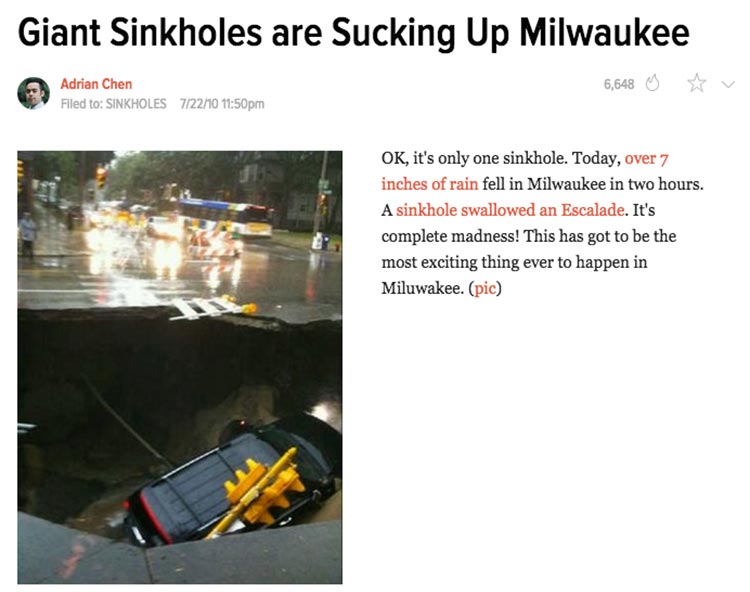 24 hours later, the Cadillac Escalade that was swallowed by an East Side sinkhole was still in the sinkhole and still running, as seen in this strangely hypnotic WISN12 video:

In the end, everything was cool, because according to Newsradio 620 WTMJ, the driver of the Cadillac Escalade that was swallowed by an East Side sinkhole quickly received a new Cadillac Escalade (even though he had been driving with a suspended license):

Max Stephenson, the owner of Metropolitan Cadillac will deliver that new Escalade on Wednesday.

“Our sales manager gave him a call and wanted to know if he would needing a replacement. That’s where we ended up finding him a replacement for his vehicle. I guess the insurance company is replacing it,” said Stephenson.

“Cadillac Motor Car Division wanted to do something for him, so they’re going to certify the vehicle, which means extend the warranty from the factory.”

However, a source with direct knowledge of the situation tells Newsradio 620 WTMJ that the owner of the original Escalade was driving with a suspended license.

That source also said that the vehicle was not registered.

The site of the Cadillac Escalade that was swallowed by an East Side sinkhole is very different today. New developments, new businesses, tons of poke, and less sinkholes surround the busy intersection. But still, Milwaukee remembers. And wishes it had been in Shorewood that night, because that looked kind of fun.