After months of thought, planning, and work, Local Coverage 2016 is now only days away. On Friday, January 15, a diverse grouping of 10 Milwaukee bands and rappers will take the stage at Turner Hall to play 15-minute sets of another act’s music. Milwaukee Record might be a tad biased—creating, booking, and presenting the show and all—but Local Coverage is on the very short list of our favorite Milwaukee events. Through the unique format, the event aims to foster a sense of collaboration and unification in Milwaukee music, all while raising money for area charities.

Last year’s inaugural Local Coverage was an encouraging start to something we hope will become an annual Milwaukee music tradition. Aside from taking place at a bigger venue and featuring an even larger cast of acts, this year’s show will be a bit different than the first go-round. Here are some things you should know about Local Coverage 2016.

1. This truly is a special way to see Milwaukee musicians like you’ve never seen them before
Way back in October, members of 10 Milwaukee projects met at Club Garibaldi to select the act whose music they would be learning and re-imaging over the next 100 days. For one night only, you can hear some of Milwaukee’s favorite musicians like you’ve never heard them before. An all-female country band will cover a punk band. A rapper will take on a folk band’s material. Another folk band will cover said rapper. From start to finish, it’s going to be nothing short of a weird and wonderful spectacle to behold. If you haven’t seen the lineup yet, here it is (listed headliner to opener):

2. All profits will go to charity
What’s even more impressive than 10 Milwaukee acts taking the time to learn and adapt 15 minutes of another band’s music—when they could be focusing on writing their own material—is the fact they’re doing so for free. Once we pay the Turner Hall rental fee, every cent of profit will be split evenly between Guest House Of Milwaukee and Girls Rock Milwaukee. Last year’s sold-out show raised $1,200. With a larger venue and more participants this time around, we hope to raise much more. Trust that your $10 cover is going to some worthy causes.

3. You can win great prizes
Beyond the donations in the form of ticket sales, we’ll also be bringing in funds by selling raffle tickets. For $2 apiece (or three tickets for $5), attendees will have a chance to win things like:

Additionally, $5 from every Milwaukee Record shirt sold will be added to the donation.

4. Performers are going all out for this show
Not only is Decibully reuniting for this event, it’s getting former member Ryan Weber (also of Eric & Magill and REW) to fly in from Washington DC to help adapt Soul Low songs. Klassik (who is covering Decibully) enlisted SistaStrings, upright bass accompaniment from Johanna Rose, and drum backing from Will Rose for this show. Maritime has promised a special guest member who local music fans are sure to recognize. Tigernite will have a dancer on stage for part of its performance. Costumes are likely. Everyone is approaching their set in strange, exciting, and ambitious ways.

5. The Local Coverage fun starts at 88Nine this week
Though the show is Friday, our pals at 88Nine Radio Milwaukee (a gracious Local Coverage sponsor) will kick-start the local covers in the days leading up to the show. Thursday evening, Local Coverage participant Twin Brother will play originals and perhaps a Klassik cover or two during an in-studio “414 Music Live” performance. Listen to it at 5:30 p.m. or come by the station to check out the show for free. The half hour block before that, Ken Sumka will play local-on-local covers (including songs recorded during last year’s show courtesy of Mystery Room Mastering) during an extra special installment of “5 O’Clock Shadow.”

6. This year’s Local Coverage is all-ages
Last year’s inaugural Local Coverage at Club Garibaldi was a great test run. However, we quickly realized the event had outgrown the site. More importantly, we wanted to make Local Coverage an all-ages affair. Bring your kids. Everyone is welcome this year.

7. The show will start right on time
Given the staggering number of bands involved, this won’t be a “7 p.m. actually means 8”-type of show. Assuming all goes well with the soundcheck, Fox Face will begin playing right at 7. Don’t be late.

8. Tickets are still available
Blow past the box office line and buy your ticket today. We’d love to see you Friday. 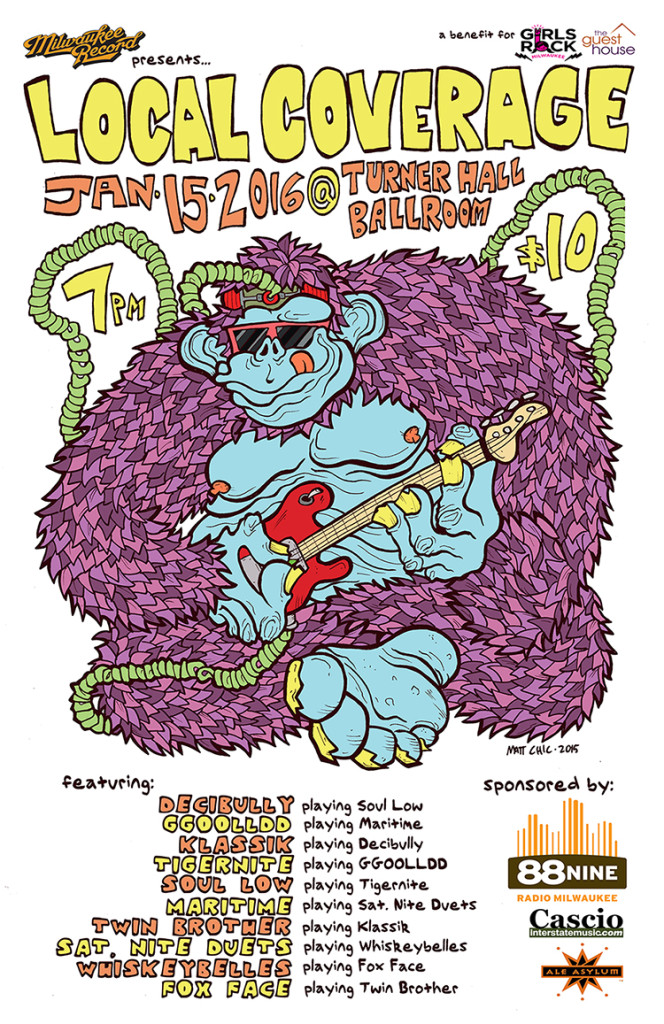