Too Bright proved to be a significant breakthrough for Perfume Genius (a.k.a. Mike Hadreas). The Seattle singer-songwriter’s 2014 album featured what is still his trademark number, “Queen,” an unforgettable statement of a song both lyrically and musically. The new No Shape is a less overtly confrontational album but no less ambitious, swerving naturally between ambient confessionals and bristling noise. Still, while one might suspect Hadreas could go the one-man-band route and tour with just an array of synths and sequencers, it was a four-piece ensemble that played Turner Hall on Tuesday night. It wasn’t what you’d call a rock show, but if any intimacy was lost, the band made up for it in intensity.

Opening act serpentwithfeet (New York singer-songwriter Josiah Wise) was a clear, fresh voice for the modern glut of electro-R&B. His stream-of-consciousness treatises and tales flowed out of him as if he had no other outlet of expression, as if he couldn’t help but sing them. It felt a bit like R. Kelly if he had something worthwhile to say, sometimes as if the words were simply swiped from Wise’s diary—Sun Kil Moon meets Thundercat but with a more dramatic emotionalism and spiritual bent. Look for some buzz to build around Wise as this tour progresses.

Turner proved to be a strange room for Perfume Genius. Hadreas emerged clad in a white tank top underneath a black suit that burst open at the top like a wardrobe malfunction frozen in time, and somehow it didn’t seem to impede his seductive dance moves at all. His opening number, “Otherside,” exploded off the stage with such force that it was difficult to imagine it being contained within Colectivo, where this show was originally scheduled. On the other hand, the early goings weren’t heavy on the rockers; the audience waited a good half hour for something to shake the foundations again, and many of the subtleties of songs like “Fool” and “Go Ahead” probably would’ve been more effective in a coffee shop. Still, it’s encouraging that Milwaukee bought enough tickets for a Tuesday night show to prompt the move.

Since Turner Hall is its own reverb pedal that you can’t turn off, adding more to the vocals is generally a bad idea. It’s rarely an ideal sound situation here, and Hadreas’s lyrics were occasionally unintelligible, although a good portion of the assembled fanbase knew the words already so it didn’t matter much. However, serpentwithfeet’s vocals had come across significantly clearer, which made Hadreas’s sometimes muddled voice all the more vexing.

It was with “Wreath” that the band came blazing back to life, and from then on, really, the ensemble held everyone spellbound. A cover of Mary Margaret O’Hara’s “Body’s In Trouble” was the sort of thing you might expect from someone who writes the lyric “No family is safe when I shashay.” Hadreas prowled and howled, producing some of his most otherworldly shrieks during this tune. Another highlight, “Grid,” evoked an early Adam Ant post-punk vibe, and shades of industrial crept into the latter portion of the set as well.

Following an energetic performance of the Twin Shadow-esque anthem “Slip Away,” the band departed, and Hadreas returned after about 10 seconds to perform a captivating string of solo piano tunes, beginning with the striking No Shape closer “Alan,” and wrapping up with “Mr. Peterson,” after which the band returned for a rousing “Hood.”

There had been a couple of odd, lengthy pauses between songs throughout the night, where banter would perhaps normally be, and Hadreas seemed to acknowledge a touch of discombobulation prior to the triumphant “Queen” finale. “I feel like I’m phasing in and out. Is there a full moon?” he asked the crowd. “I feel like something planetary is happening. Or I could just be hungry…” Even if it wasn’t the greatest Perfume Genius show ever, it was undeniably a radiant glimpse of a still-rising star. 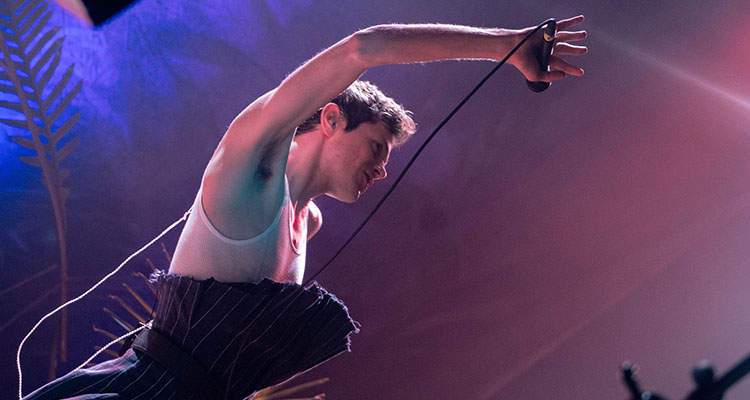