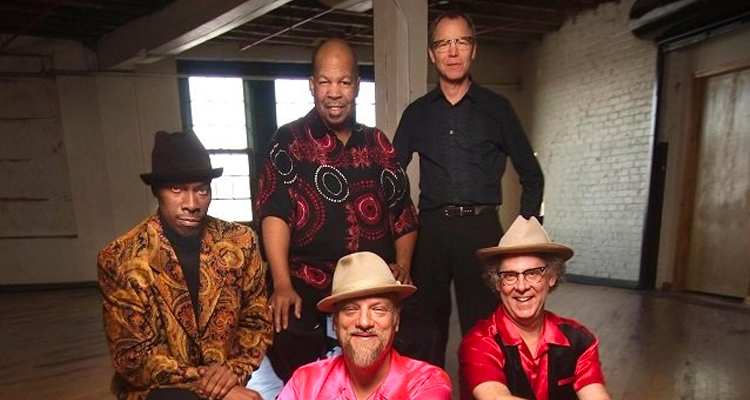 “Paul Cebar cut his teeth musically in the coffeehouse folk scene of the mid-’70s in Milwaukee. First paying gigs took place in late ’76 with an emphasis on solo recasting

“Paul Cebar cut his teeth musically in the coffeehouse folk scene of the mid-’70s in Milwaukee. First paying gigs took place in late ’76 with an emphasis on solo recasting of small combo jump-blues and other early R&B. Upon graduation from New College in Sarasota, Florida, with a thesis addressing rhythm & blues varieties featuring a hearty emphasis on Louis Jordan and Buddy Johnson, Cebar dedicated himself to trodding the boards in earnest and spent substantial amounts of time testing the waters out New York way while exploring band dynamics with a soul and New Orleans-minded crew called the R&B Cadets back home. The Cadets ranged about from 1980 to 1986 and featured the grand original tunes of John Sieger alongside the winning assortment of B sides and obscurities that were the fruits of Cebar’s research. Concurrently, he kept alive the spark of his solo work with a small group which came to be known as The Milwaukeeans. Throughout the early 80s, this combo featured Rip Tenor on tenor sax, Alan Anderson on upright bass, Robyn Pluer on vocals and Paul on acoustic guitar and vocals, and drew most of its repertoire from ’30s, ’40s and ’50s jazz and R&B.

“With the demise of the Cadets in mid-1986, Cebar and Pluer, Tenor and Anderson welcomed drummer Randy Baugher and early Cadet saxophonist/vocalist Juli Wood to a new dance-floor fortified version of The Milwaukeeans which reflected Paul’s ongoing and deepening fascination with African, Latin American and Caribbean rhythm & blues analogues. Rambling about the Midwest for the remainder of the ’80s with occasional forays east and south, The Milwaukeeans began to rely more and more upon the original material that began to emerge in the aftermath of years of interpolation and grappling with favorites.

“The first studio album, “That Unhinged Thing,” which was culled from a number of years of recording, finally saw the light of day in 1993. It sparked a wider itinerary in the touring department, with initial forays to the west coast and Canada, as well as returns to the east and south. Following the release of the record and six months of touring, founding member and estimable vocalist Robyn Pluer left the band to attend to le private life.

“Rebuffing the command of the record label, Shanachie, that he add a female vocalist, Cebar and cohorts ventured forth into the storm without a label umbrella for what turned into two years of enthusiastic touring with much attendant hand-wringing. Finally, they landed on the shores of a little label that could (for awhile), Don’t Records, a Milwaukee-based, heart-driven indie. In the summer of ’95, they set about making “Upstroke for the Downfolk,” while upon its release in the fall of that year began to make inroads at adult album alternative radio outlets nationwide. The single “Didn’t Leave Me No Ladder” ushered the fellows to a new level of visibility and the vans rolled on.

“A six-song EP, “I Can’t Dance For You,” followed in the spring of ’96 and was superseded by “The Get-Go,” a full-length recording released in the fall of ’97. Radio support was more sporadic, though the fan corps kept growing. But halfway through ’98, Don’t’s distributor declared bankruptcy and its inventory was impounded. With its merchandise out of reach, Don’t found it increasingly difficult and ultimately impossible to carry on.

“In 2001, 15 1/2 years into the dance band incarnation of The Milwaukeeans, the fellows presented, “Suchamuch”,a long-requested live album recorded at Martyr’s in Chicago and continued to offer their multifarious wares to all and sundry. The present day incarnation of Tomorrow Sound took shape with the arrival (8 years back) of bassist, Mike Fredrickson, joining 22 year veterans Reggie Bordeaux on drums and Bob Jennings on saxophones and keyboards.

“The peripatetic pageant continues unabated with renewed focus on “the song ” in the context of the increasingly forceful rhythmic exploration that is at the heart of Cebar’s quest. Stripping back to 4 pieces has opened up space for the understated command of Bob Jennings’ keyboard and saxophonic thinking. Field Marshall Cebar’s pithy guitar musing comes to the fore building upon the muscular rhythmic lattice laid by Reggie and Mike. With an ever-deepening appreciation for the funk and the polyglot rhythmic conception that is their trademark, Paul Cebar Tomorrow Sound said More! More! More! in 2004. Way to thrive in 2005! Dipped their wicks in 2006, Partied like ’11 in 2007, and have their wild heads on straight in 2008. Fine fine Fine into 2009! funked it again and again and again and again in ’10, made like 2107 in ’11, and have packed up the worry they shelved in ’12, incorporated the added vim they were flirtin’ with in ’13 and are full-on sportin’ A-team in ’18

“Presently spreading the word with their gangling, headlong and insouciant record,”FINE RUDE THING”, Paul Cebar Tomorrow Sound want and need you to come on out and help them get down.